This Is 8 Minutes of Tow Surfing Action From a Wild Day at Jaws January 16th. Where Was Surfing Actually Born? A Look at the Origins of Wave Riding. Modern surfing was born in Hawaii. 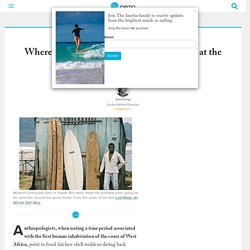 But wave riding has probably been going on for centuries around the world. Photo: From the cover of the film, Lost Wave: An African Surf Story Anthropologists, when noting a time period associated with the first human inhabitation of the coast of West Africa, point to fossil kitchen shell middens dating back 170,000 years; dense academic tomes like Traditional Fishing Methods of Africa chronicle shoreline techniques in use over 10,000 years ago. So what? So, consider that 20 years ago I accompanied veteran surf explorers Randy Rarick and John Callahan to a tiny island off the coast of West Africa called Sao Tome.

We were the first contemporary surfers these villagers had ever seen. Best Beginner Surfboards / The Complete Guide to Surfboards for Beginners. Watch This High-Speed Surfing Accident On This Massive Wave. John Belushi & Dan Aykroyd take Brian Wilson Surfing 1976. Bodyboarding's chaotic quest to be more than a 'sleeping giant' Teza McKenna, the manager of The Bodyboarding World Tour remembers a golden age of bodyboarding. 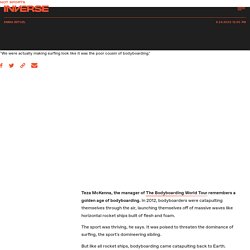 In 2012, bodyboarders were catapulting themselves through the air, launching themselves off of massive waves like horizontal rocket ships built of flesh and foam. The sport was thriving, he says. It was poised to threaten the dominance of surfing, the sport's domineering sibling. But like all rocket ships, bodyboarding came catapulting back to Earth. Moments of high-flying fame followed by rough landings have since plagued the ascendance of bodyboarding as it tries to escape surfing's shadow. The Semi-Stoned Quarantine Surf Movie Mixtape. This story is part of our Dog Days Survival Guide, a collection of essays, recommendations and how-tos to help you get through the hottest days of the year. 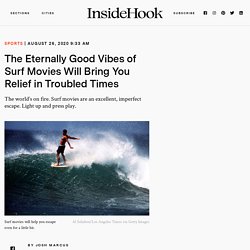 There are two kinds of endless summer: the dreamy kind, where you circle the globe chasing warm weather and good waves, and then there’s 2020, the peat bog of misery we find ourselves currently stuck in. A global pandemic, plus a recession, plus West Coast wildfires do not a wonderful summer make, and a little escapism is warranted. E-Bomb 2/2 Zip Free Wetsuit. The Best Places For Surfing In Jamaica. Watch: New Tanner Gudauskas Film Short. We love the Gudauskas brothers for so many obvious reasons, and it’s been especially rad to watch their creativity develop in recent years on the film front. 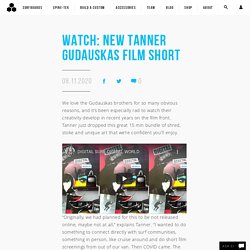 Tanner just dropped this great 15 min bundle of shred, stoke and unique art that we’re confident you’ll enjoy. “Originally, we had planned for this to be not released online, maybe not at all,” explains Tanner. “I wanted to do something to connect directly with surf communities, something in person, like cruise around and do short film screenings from out of our van. Moe - Firewire Surfboards. Surfing by the amayrillis at DuckDuckGo. Surfing Florida Museum gets big, new location - News - Northwest Florida Daily News - Fort Walton Beach, FL. WEST PALM BEACH — Like a nomadic board rider chasing an endless summer, Palm Beach County’s surfing museum has moved restlessly from break to break over the past 10 years. 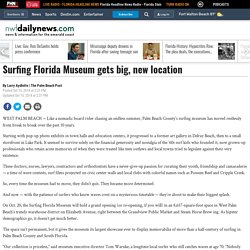 Starting with pop-up photo exhibits in town halls and education centers, it progressed to a former art gallery in Delray Beach, then to a small storefront in Lake Park. It seemed to survive solely on the financial generosity and nostalgia of the ’60s surf kids who founded it, now grown-up professionals who retain acute memories of when they were treated like teen outlaws and local towns tried to legislate against their very existence.

These doctors, nurses, lawyers, contractors and orthodontists have a never-give-up passion for curating their youth, friendship and camaraderie — a time of wave contests, surf films projected on civic center walls and local clubs with colorful names such as Possum Reef and Cripple Creek. So, every time the museum had to move, they didn’t quit. The Amaryllis « Trimoot's Weblog. ** Update 2/6/2012 – Someone commented on this post today so I’ve added another picture here: Thanks Bridie Miller! 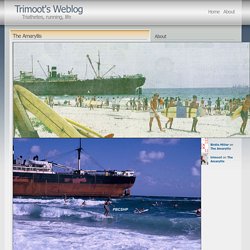 ***Updated 2/22/2013 – Someone commented on this post again today (a year later) and I’ve tried to clean up some of the links and add pic’s Strange how things just come together. Kelly Slater Tests Out the Waters of BSR With a Crew of Talented Groms. Last week, Kelly Slater and a group of uber-talented groms invaded Waco’s BSR Cablepark to get some work in. 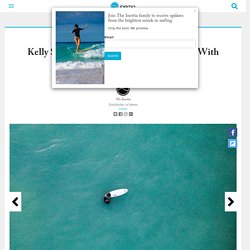 And work they did put in. From the looks of it, they left little on the table at the best wave in Texas. Renowned surf photog and trusted contributor to The Inertia Ryan Miller was there to capture the action, of which there was plenty. “I was so damn excited to go somewhere on a surf trip,” he wrote in one of his colorful emails. “I flew down coach and loved every second of it. Yes! “We didn’t get deep into his thought at all regarding the tech,” Miller told us.

Surf for all seasons: Here's where you can catch waves year-round. The Man Who Surfs the Biggest Waves Without a Board. Early one morning in October of 2015, a 21-year-old Brazilian surfer named Kalani Lattanzi stepped onto the sand at Praia do Norte in Nazaré, Portugal. 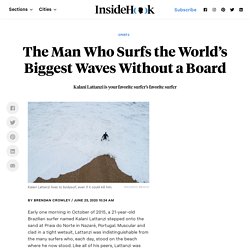 Muscular and clad in a tight wetsuit, Lattanzi was indistinguishable from the many surfers who, each day, stood on the beach where he now stood. Mark Healey Describes Hitting the Eject Button on a Boat at Maverick's. The Story Behind Mark Healey's Maverick's Eject Mark Healey tells the story behind the clip that went viral of him catapulting from his boat into the air at Maverick's. 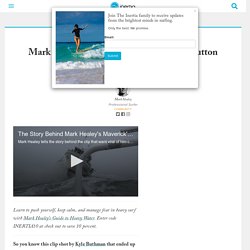 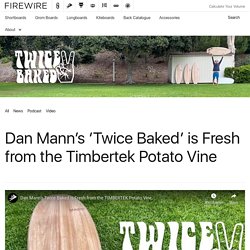 Trimming in Timbertek through chop and slop – the Twice Baked is made for coming out of isolation. Dan Mann designed the Twice Baked to stay in your trunk because it excels in junk, so that your surf stoke won’t be wasted after being out of the water for weeks. The Twice Baked is fun to surf no matter how small the waves are.. Monsoon Lagoon AZ - Surfing, Amusement Parks. Rick Kane Rejoice: Arizona Is Getting an 11-Acre Surfing Wave Park That Generates 1,000 Waves Per Hour. You may remember a certain surfing movie called North Shore. Of all the surfing movies, North Shore sits at the top of the list — or at least very close to it — for must-watch surfing movies. Along with Big Wednesday and Point Break, North Shore is just about perfect.

How the Physics of Waves Make Surfing Possible. (1) Surfing Alaska’s Famous Bore Tide. "Dancing in the Dark" Captures the Wonder of Night Surfing. Wetsuits that hide humans from sharks. Bright idea: Lights under boards may hide surfers from sharks. Israel's top 10 surfing beaches. Photo by www.shutterstock.com Israel has a stretch of sandy beaches extending for about 186 miles, and a sea that is virtually seaweed- and shark-free.

While conditions may not be up to scratch for pro surfers, local experts say it’s a great spot for beginners and laid-back surfers. “The water’s warm, there are no strange animals and you only have to worry about two weeks of jellyfish in July,” says Nir Almog, known to many as the father of Israeli surfing. THE LADIES, THE MEN, SOME EPIC BATTLES AND FRYING FISH ANTICS. THE NINTH 9FT & SINGLE. 10 Best Surfing Campsites on the East Coast - Surfline. Seven Boards That Mattered at the Vissla Cosmic Creek Challenge. Can a Wool Surfboard Be as Good as a Traditional Board? Humans use wool for all sorts of products: clothing, insulation, carpeting, blankets, technical garments and on, and on. We can add “surfboard” to that ever-growing list, now that Firewire Surfboards is bringing to market a peculiar idea from New Zealand surfboard shaper Paul Barron that replaces the fiberglass fabric of a board with ovine fiber.

The technology is called Woolight, and Firewire is manufacturing a limited initial quantity to test the market acceptance, all of them in the company’s most popular shape, the Rob Machado Seaside. Photos: Palm Beach County Surfing History Project - South Florida Sun-Sentinel. The History of Surfing in 6 Surfboards. Eric “Bird” Huffman keeps the entire history of modern surfing in a 4,000-square-foot corrugated tin prefab structure in San Diego.

Around 1,200 surfboards cover the walls and ceiling of Bird’s Surf Shed, narrating the entire evolution of the sport from 10-foot-long single-fin Balsa guns up to the short, modern thrusters. Huffman, who’s been paddling out for over 50 years and working at surf shops for just as long, sees each piece as part of a larger chronicle. “Each board becomes part of the story — who shaped it, where it was ridden, how, when and where it was made.” Shortboard Evolution Revolution - Florida Surf Museum. By 1964, Beaches became an endless summer as everybody went surfing - News - The Florida Times-Union - Jacksonville, FL. As spring came to to the Beaches 55 years ago, as the Atlantic got warmer and the sun brighter, you would have noticed this sight: Skinny teen and preteen surfers dragging heavy surfboards toward the water, where they flailed and wiped out and swam after their boards.

Weeks later, with practice, they might have appeared more confident — swimming less and gliding more on the modest waves they found as the summer of 1964 approached. They were Duval County's new surfers, and there were more and more of them born each week. For how could they resist the call of the sea? Here, a whole new world was being offered them. The Beach Boys had already told them that everybody's gone surfing. A Surf Trip to Oaxaca, Mexico in 2 Minutes. Keahi de Aboitiz's Masterclass on Crowd Navigation (and Tube Riding) Haydenshapes Surfboards. The Year in Surf '19: Kelly Slater Retirement, Wave Pools, Sharks & More. 2 months ago | Updated 1 month ago Editor’s note: Nick Carroll has been studying and writing about surfing for four decades.

What The Heck is Kelly Slater Doing? - Surfline. 4 days ago | Updated 4 days ago. Video: Surfing frozen waves in Nantucket. World's largest surfing lagoon to be built in Korea. The Fight for Gender Equality in One of the Most Dangerous Sports on Earth. Best Swell in Seven Years (Maybe Longer) for South Beach Miami - Surfline. 2 days ago | Updated 1 day ago South Beach Miami is the Great White Buffalo of East Coast surfing. Kelly Slater’s Shock Wave. The first few hours I spent at the W.S.L. Surf Ranch, a wave pool built for surfing in the farmlands south of Fresno, California, were for me a blur.