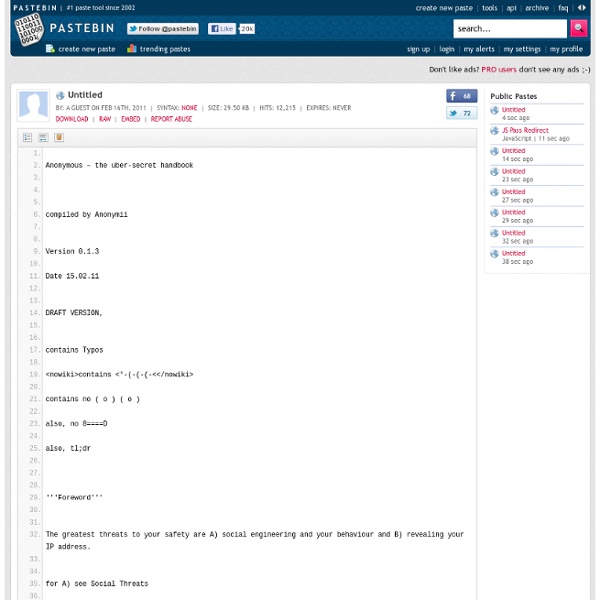 Massive information dump by Anonymous on hundreds of cops, including a ‘pedo cop’ Anonymous has been extremely active over the last few weeks; for one, disclosing the inept state of Alabama’s privacy of 40,000 of its residents, after hacking into their site in just minutes. In addition to a mountain of website’s defaced and hacked, the group has surpassed themselves. Again. Imagine what you would expect to find after hacking into the databases of the Los Angeles Police Canine Association‘s website — certainly not disturbing images from an ‘alleged’ pedo cop of unclothed children with adults – the police officer in question, Jesse Flores, should have ‘expected them.’ Included in the trove of information obtained by Anons @CabinCr3w and @ItsKahuna are names, addresses and phone numbers of hundreds of police officers and their membership rosters which were taken upon login. Disturbing images in the database were provided by this officer: The information obtained includes emails, “We now have all of their emails, and you do as well. Quote in full: ShareThis

D.E.A. Launders Mexican Profits of Drug Cartels  By GINGER THOMPSON/New York Times WASHINGTON — Undercover American narcotics agents have laundered or smuggled millions of dollars in drug proceeds as part of Washington’s expanding role in Mexico’s fight against drug cartels, according to current and former federal law enforcement officials. A crime scene in Monterrey, Mexico, last week. The agents, primarily with the Drug Enforcement Administration, have handled shipments of hundreds of thousands of dollars in illegal cash across borders, those officials said, to identify how criminal organizations move their money, where they keep their assets and, most important, who their leaders are. They said agents had deposited the drug proceeds in accounts designated by traffickers, or in shell accounts set up by agents. The officials said that while the D.E.A. conducted such operations in other countries, it began doing so in Mexico only in the past few years. It is not clear whether such operations are worth the risks. Mr.

Everything you need to know about PDF or PDF is by far the most popular format for documents these days. It’s widely used and most of us have somekind of PDF reader installed on our systems. It has been reported that Adobe PDF Reader has been downloaded by more than 300 million users. This post will cover a number of topics ranging from free tools and applications on how you can create your own PDF documents, as well as other online alternatives of similar functions. Also included are alternative PDF Readers and resources on how you can onvert your existing PDF to other formats, and a lot other information. PrimoPDF ( Offline & Online ) CutePDF PDF Redirect Bullzip PDF PDFCreator (SourceForget.net) PDFCreator (PDFForge.org) DoPDF FreePDFCreator ( Offline & Online ) I’m using CutePDF myself, and tested a couple of PDF creators quite a while back. * If you’re trying to convert personal documents, try not to use any online pdf converters. PrimoPDF PDFOnline FreePDFConvert – Also allows you to convert from PDF to DOC, XLS or RTF. </b>*}

Scaling images and creating thumbnails from UIViews – iCab Blog In this blog post I would like to show how you can do some common image-related tasks, like scaling an UIImage object or creating a thumbnail image from a UIView. I’m implementing these features as category for the UIImage class, so these can be used with all UIImage objects without the need to subclass the UIImage class. Scaling UIImages Scaling images is important for example when you want to create thumbnail images which are used as an overview for real documents or larger pictures. UIImage *originalImage = ...; CGSize destinationSize = ...; UIGraphicsBeginImageContext(destinationSize); [originalImage drawInRect:CGRectMake(0,0,destinationSize.width,destinationSize.height)]; UIImage *newImage = UIGraphicsGetImageFromCurrentImageContext(); UIGraphicsEndImageContext(); At first we have to create and start an image context with the size of the resulting image. Creating an UIImage from a UIView The code is very similar to the code from above to scale the image. Retina Display MyImage.h:

Anonymous is dying. What comes next? : anonymous Detected by US spy satellites’ in space above Mexico!  They use sophisticated communications equipment even on U.S. soil, says a report by the Homeland Security Group Today Several of the most dangerous criminal organizations in Mexico have established their own networks of high-tech communications, with systems to military grade encryption, for information on the movements of Americans in the border police; group’s report says a Homeland Security Today. That group, which is defined as “the principal source of independent news and analysis on security issues in the U.S., indicates that intelligence officials are worried their country not only by the use of communications equipment lookouts highlighted by criminal gangs to guide smugglers. Also, he says, because these “observers” could be used for direct attacks against Border Patrol and other police forces in the border region with Mexico. Homeland Security’s slogan according to one informant is, “these communication skills should not be taken lightly.” Operation signal theft Monitored movements

blog.ohinternet The sister of Facebook CEO Mark Zuckerberg wants to put an end to online anonymity. Facebook wants to force people to use their real names on profiles. Randi Zuckerberg is Facebook’s marketing director and believes users would act much more responsibly on the Internet if real names at all times were compulsory. Wish in one hand, crap in the other. Which one fills up first? (Ms.) “ The use of real names online could help curb bullying and harassment on the web.I think anonymity on the Internet has to go away [...] Excuse me Ms. There are, however, differing opinions. 4chan founder Christopher Poole : “ Where there’s no risk of failure, experimentation flourishes. As I am more inclined to side with Mr. Source: HuffPo , Marie Claire Magazine (lol) August 2011 issue

iPhone Killer: The Secret History of the Apple Watch In early 2013, Kevin Lynch accepted a job offer from Apple. Funny thing about the offer: It didn’t say what he would be doing. So intense is Apple’s secrecy that all Lynch knew was his vague title, vice president of technology, and that he’d be working on something completely new. ¶ It was odd that Apple even offered him a job. During his eight years at Adobe, most recently as chief technology officer, he was best known as the only person dumb enough to publicly fight Steve Jobs over the iPhone’s lack of support for Flash videos. Kevin Lynch was responsible for turning the Watch from an idea into a product. Lynch had a lot to prove—and, apparently, a lot to do. As soon as he walked into the studio, he found out the project he’d been hired to run was already on deadline. There were no working prototypes; there was no software. It was either hubris or an entirely justifiable expectation. No pressure, Kevin.