How to Completely Mask & Anonymize Your BitTorrent Traffic Using Anomos 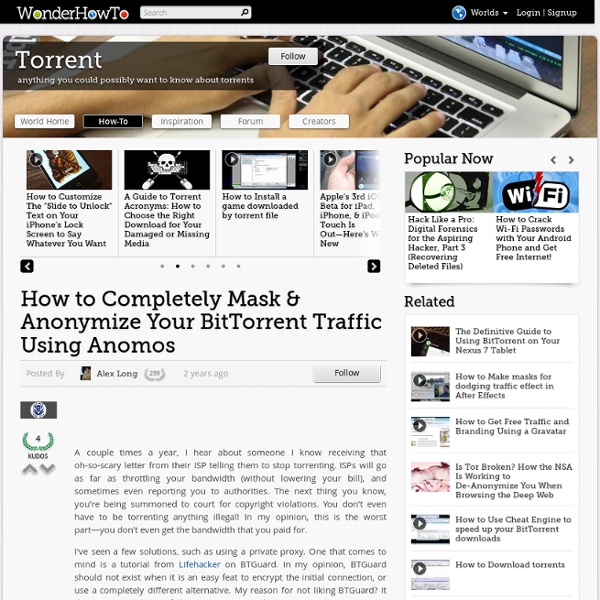 How to Completely Mask & Anonymize Your BitTorrent Traffic Using Anomos A couple times a year, I hear about someone I know receiving that oh-so-scary letter from their ISP telling them to stop torrenting. ISPs will go as far as throttling your bandwidth (without lowering your bill), and sometimes even reporting you to authorities. I've seen a few solutions, such as using a private proxy. BTGuard acts like a proxy and simply anonymizes your traffic when connected through them. A free alternative would be to use ItsHidden VPN service. Today's Null Byte will demonstrate how to get ready for the future. ThePirateBay, the world largest BitTorrent tracker, has plans to offer .atorrent files as an optional download. uTorrent, the largest BitTorrent client, has plans to integrate the Anomos protocol in future releases. Installation & Configuration of Anomos Client Anomos is basically the same, in principle, as the standard Bittorrent protocol. Downloads

Two Targets, One Bullet: How the Ultimate Sniper Rifle Was Made | Danger Room In 2007, when the Navy SEALs went looking for an alternative to the Barrett weapons system it already used — an ultra-high-caliber rifle capable of firing .5-inch cartridges at distances beyond 1,200 meters — it talked to the best weapons manufacturers across the globe. Eventually it contacted a small company with 50 employees, who, it had heard, could make a weapon suitable for its tactical and operational demands. [partner id="wireduk"] It didn’t buy American; it skirted around the excellence of German and Scandinavian weapons design; and, unsurprisingly, it didn’t call the Russians. It went British. It approached an enterprise that embodies a high-tech, design-focused approach, blending traditional British engineering with the latest technological innovation. The Portsmouth company, Accuracy International (AI), equips the British Special Boat Service and Special Air Service with sniper rifles. AI’s weapons are now part of long-range sniping lore. Story continues at Wired.co.uk…

Nerd Paradise : How to Write a 20 Page Research Paper in Under a Day - StumbleUpon Posted on: 10 Cado 7:0 - 5.27.29 So you've procrastinated again. You told yourself you wouldn't do this 2 months ago when your professor assigned you this. But you procrastinated anyway. Pick a Topic The more "legally-oriented" your topic is, the better. Make a list ...of every possible outcome that this issue could cause in...the near future...the far future...of every person that this topic affects....of any instances where this topic has come in the news....what you would do about this topic if you had the chance/power/enough-sugar...any little detail you can think ofThe important thing about this is to think of ABSOLUTELY EVERYTHING, no matter how silly or far-fetched. Reorder everything Put your most obvious argument first. Then put weird off the wall stuff, regardless of importance. Put the strongest argument for your case next. Now list the incidents that will help argue for your point. It's best to keep all this in the form of an outline. Spaces Now print it out. Write Go Back Inside

How To Change Windows 7 Logon Screen Home » How To, Microsoft, Windows diggdigg Hi and welcome back to another article in the series of Coolest Windows 7 Tips and Tricks. Today, we’ll be covering the easiest and simplest way to change the background of you windows login screen. Since Windows XP, windows login screen has been a beautiful entry point to your desktop. Windows 7 comes with pre-built functionality to change the login screen. Press Win+R key and Type “REGEDIT” at run prompt (without quotes). Did you know that there are multiple hidden Windows 7 themes in your computer? Follow us on Twitter or join our Facebook fanpage for latest Tech News and Tutorials. Advertisements Subscribe to TecRux: Subscribe to RSS Feed or get latest updates in your Inbox.Note: * Click confirmation link sent in email * Don't see the email, check spam folder Related Posts Article by Umair H. Umair H. has written 131 awesome articles.

Anonymous Email - Anonymous SMS - Sharpmail.co.uk Dar Nós How To… Embed This Infographic <a href= ‎"><img src=" title="10 How Tos" alt="How To Infographic" border="0" class="nopin" /></a><br />Source: <a href=' title='Interesting Facts'><a href=' title='Interesting Facts'>Today I Found Out</a></a> 1) How to drastically increase the life of your shaving razor Before or after you shave (I prefer before so that the blades are dry), place your jeans on a hard flat surface; then run the razor up the pant legs about 10-15 times quickly; then repeat running it down the pant legs 10-15 times quickly. The threads on the jeans then will very effectively both fix any tiny bends in the blades that inevitably happen and will also sharpen the blades on your shaver cartidge. 2) How to make your teeth whiter Baking soda makes a good teeth whitener. 1.

HE HATES PERFUME "Christopher's perfumes are not for everyone", writes Jessica Gallucci about the man behind CB I Hate Perfume. But you might consider a dab of "Wet Pavement" or "In the Library" behind each ear ... Special to MORE INTELLIGENT LIFE "I have a strong sensitivity to certain aromachemicals, like musk," says Christopher Brosius. "The aldehydes in Chanel No. 5 make me puke." Christopher is the perfumer behind CB I Hate Perfume Gallery, a small shop on a street that runs parallel to New York's East River. The shop's exposed wooden beams and minimalist decor give it the air of an austere cabin. The inventory is huge, partly because Christopher is compulsive about bottling pleasant aromas, and partly because his clients have such varied and specific tastes. Gorgeous fragrances often contain notes of something nasty, it turns out. A client once told Christopher how she loved the scent that wafted from her summer home's air conditioner after it had been out of use all winter.

30 free programming eBooks - citizen428.blog() Since this post got quite popular I decided to incorporate some of the excellent suggestions posted in the comments, so this list now has more than 50 books in it. BTW: I’m not very strict on the definition of “ebook”, some of them are really just HTML versions of books. [UPDATED: 2012-01-18] Learning a new programming language always is fun and there are many great books legally available for free online. Lisp/Scheme:Common Lisp: A Gentle Introduction to Symbolic ComputationHow to Design ProgramsInterpreting Lisp (PDF, suggested by Gary Knott)Let Over LambdaOn LispPractical Common LispProgramming in Emacs LispProgramming Languages. Ruby:The Bastards Book of Ruby (suggested by Dan Nguyen)Clever Algorithms (suggested by Tales Arvelos)Data Structures and Algorithms with Object-Oriented Design Patterns in RubyLearn Ruby the Hard WayLearn to ProgramMacRuby: The Definitive GuideMr. Erlang:Concurrent Programming in ErlangLearn You Some Erlang for Great Good

Kali: Martial Arts of Jason Bourne | finChin No defense. No evasion. No retreat. No moving away. You attack, I counterattack. A brutal new (to us) martial arts that focuses on maximum damage in minimum time: kali. Kali (usually, pekiti-tirsia kali) is the new favorite martial arts among special forces and law enforcement agencies. What’s kali? Later, Spain sent a much larger force to conquer the Philippines. You probably have seen stylized versions of kali in many movies. In every Bourne movie, there’s always a fight up close and personal with a dangerous assassin. If you wish to see more of the approach and thinking behind kali, watch the following US Army Special Forces training video. Loading ... Recommended Posts

Horrible Cards for Valentines Day - The Oatmeal - StumbleUpon Horrible Cards are Copyright © 2012 Matthew Inman. Please don't steal. The Oatmeal Constrictor knot History[edit] First called "constrictor knot" in Clifford Ashley's 1944 work The Ashley Book of Knots, this knot likely dates back much further.[5] Although Ashley seemed to imply that he had invented the constrictor knot over 25 years before publishing The Ashley Book of Knots,[1] research indicates that he was not its originator.[6] Ashley's publication of the knot did bring it to wider attention.[7] Although the description is not entirely without ambiguity, the constrictor knot is thought to have appeared under the name "gunner's knot" in the 1866 work The Book of Knots,[8][9] written under the pseudonym Tom Bowling.[10] in relation to the clove hitch, which he illustrated and called the "builder's knot". Tying[edit] The method shown below is the most basic way to tie the knot. Variations[edit] Double constrictor knot[edit] If a stronger and even more secure knot is required an extra riding turn can be added to the basic knot to form a double constrictor knot. Usage[edit] Releasing[edit]