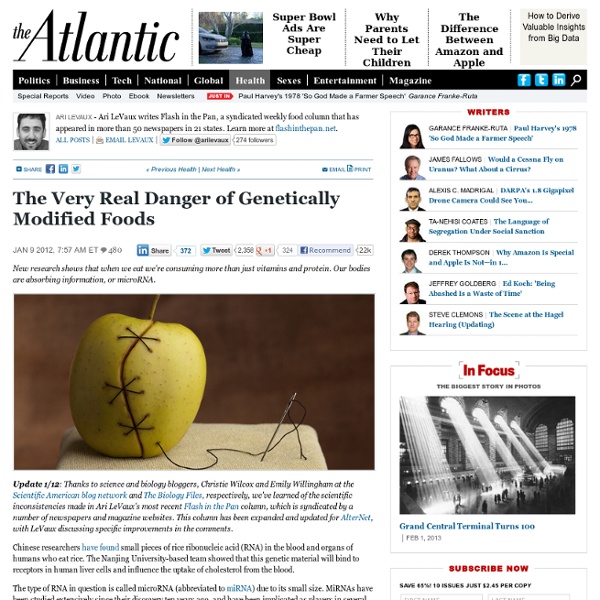 New research shows that when we eat we're consuming more than just vitamins and protein. Our bodies are absorbing information, or microRNA. Update 1/12: Thanks to science and biology bloggers, Christie Wilcox and Emily Willingham at the Scientific American blog network and The Biology Files, respectively, we've learned of the scientific inconsistencies made in Ari LeVaux's most recent Flash in the Pan column, which is syndicated by a number of newspapers and magazine websites. This column has been expanded and updated for AlterNet, with LeVaux discussing specific improvements in the comments. Chinese researchers have found small pieces of rice ribonucleic acid (RNA) in the blood and organs of humans who eat rice. The Nanjing University-based team showed that this genetic material will bind to receptors in human liver cells and influence the uptake of cholesterol from the blood. The type of RNA in question is called microRNA (abbreviated to miRNA) due to its small size. And: Related:  anonymous

How Genetically Modified Foods Could Affect Our Health in Unexpected Ways | January 11, 2012 | Like this article? Join our email list: Stay up to date with the latest headlines via email. Chinese researchers have found small pieces of rice ribonucleic acid (RNA) in the blood and organs of humans who eat rice. The type of RNA in question is called microRNA (abbreviated to miRNA) due to its small size. Should the research survive scientific scrutiny -- a serious hurdle -- it could prove a game changer in many fields. That knowledge could deepen our understanding of many fields, including cross-species communication, co-evolution, and predator-prey relationships. This study had nothing to do with genetically modified (GM) food, but it could have implications on that front. Monsanto's website states, "There is no need for, or value in testing the safety of GM foods in humans." The Central Dogma resembles the process of ordering a pizza. We've known for decades that the Central Dogma, though basically correct, is overly simplistic. And,

A List of Xenoestrogens « Endometriosis Journey A List of Xenoestrogens Posted on Updated on A List of Xenoestrogens Posted on October 20, 2007 by sowgenerously, edited by Endometriosis Journey for redundancy If you are attempting to avoid xenoestrogen exposure, here is a list of substances to avoid. The short answer is to go as organic and “green” as you can. Avoid: Avoid naturally occurring plant estrogens: * Coffee * Clover, red clover tea, alfalfa sprouts * Sunflower seeds * Queen Anne’s lace (wild carrot) * Pomegranate – The Greeks used this plant as a contraceptive! Chemicals: Here is another list from Dr. 1. According to Dr. * Use glass or ceramics whenever possible to store food and water. References:

What is MicroRNA? MicroRNAs are a class of post-transcriptional regulators. They are short ~22 nucleotide RNA sequences that bind to complementary sequences in the 3’ UTR of multiple target mRNAs, usually resulting in their silencing. MicroRNAs target ~60% of all genes, are abundantly present in all human cells and are able to repress hundreds of targets each. MicroRNAs were first discovered in 1993 by Victor Ambros, Rosalind Lee and Rhonda Feinbaum during a study into development in the nematode Caenorhabditis elegans (C. elegans) regarding the gene lin-14. It was only in 2000 when let-7 was discovered to repress lin-41, lin-14, lin28, lin42 and daf12 mRNA during transition in developmental stages in C. elegans and that this function was phylogenetically conserved in species beyond nematodes, that it became apparent the short non-coding RNA identified in 1993 was part of a wider phenomenon. Since then over 4000 miRNAs have been discovered in all studied eukaryotes including mammals, fungi and plants.

Health - Marion Nestle - Debunking the Health Claims of Genetically Modified Foods In a new book, critics of crop modification take a science-based approach to advocacy. I've just been sent GMO Myths and Truths, a review of research on claims made for the safety and efficacy of genetically modified (GM) foods. The authors are Michael Antoniou, Claire Robinson, and John Fagan, scholars with critical positions on GM foods. I've been writing about GM foods since the mid-1990s, and am impressed by the immutability of positions on the topic. As I discuss in my book Safe Food: The Politics of Food Safety, the pro-GM and anti-GM advocates view the topic in quite different ways that I call for lack of better terms "science-based" versus "value-based." In GMO Myths and Truths, the authors attempt to cross this divide by taking a science-based, heavily referenced approach to dealing with claims for the benefits of GM foods. Whether or not you agree with these conclusions, the authors have put a great deal of time and effort into reviewing the evidence for the claims.

Google complies with FDA demands to secretly disable Adwords accounts of nutritional detox companies : Dr. Leonard Coldwell The latest attack on free speech in America comes from the FDA and is supported by Google Adwords. NaturalNews has learned that the FDA is quietly, and without notice to affected companies, commanding Google to disable the full Adwords accounts of nutritional supplement companies offering “detox” or “chelation” nutritional products. This secret war against nutritional supplement companies is being waged entirely outside the law, as the FDA gives no notice to affected companies and does not give them any opportunity to respond in their defense. This action is just the latest round in the FDA’s war on nutritional supplement companies, which have been subjected to armed raids, threatening warning letters, product seizures, and even international kidnapping by the FDA itself ( In this case, the FDA is conducting an economic embargo on the company known as Global Healing Center (www.GlobalHealingCenter.com), founded by Ed Group III. Hi,