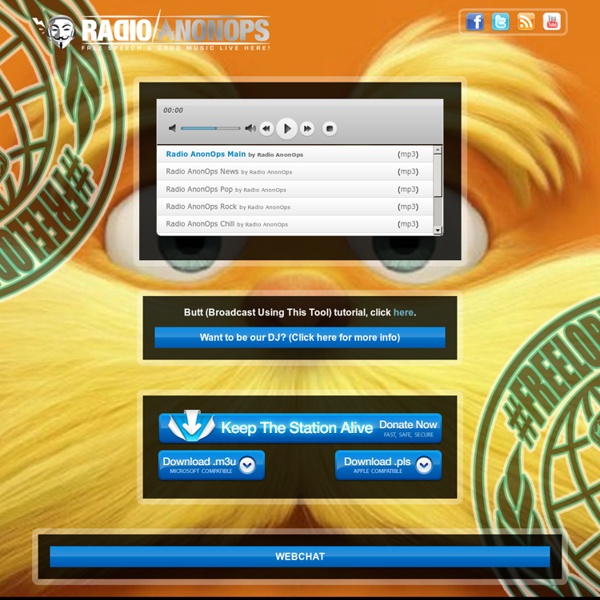 ReZoAnonymous (AnonymousVideo) Home - Phonica Records Anonymous (group) Anonymous (used as a mass noun) is a loosely associated international network of activist and hacktivist entities. A website nominally associated with the group describes it as "an internet gathering" with "a very loose and decentralized command structure that operates on ideas rather than directives". The group became known for a series of well-publicized publicity stunts and distributed denial-of-service (DDoS) attacks on government, religious, and corporate websites. Anonymous originated in 2003 on the imageboard 4chan, representing the concept of many online and offline community users simultaneously existing as an anarchic, digitized global brain.[3][4] Anonymous members (known as "Anons") can be distinguished in public by the wearing of stylised Guy Fawkes masks.[5] In its early form, the concept was adopted by a decentralized online community acting anonymously in a coordinated manner, usually toward a loosely self-agreed goal, and primarily focused on entertainment, or "lulz".

Dave Grohl And Krist Novoselic Share Memories, Unreleased Tracks From Nirvana's 'In Utero' : All Songs Considered hide captionNirvana in 1993 (from left): Kurt Cobain, Krist Novoselic, Dave Grohl. Anton Corbijn Few bands ever reach the popularity, influence and status of the early-'90s rock group Nirvana. Anyone who's old enough to remember knows that the trio from Aberdeen, Wash., helped pioneer grunge rock. But more than that, Nirvana became a symbol for an entire generation of ideas and popular culture, from fashion and art to our collective conversations about the way young people were making sense of the world back then, and how they saw their place in it. Remarkably, Nirvana did all this in a very short period of time, from about 1987 to 1994, and only released three albums during that period. All Songs Considered's Bob Boilen and Robin Hilton spoke recently with Nirvana's two surviving members, drummer Dave Grohl and bassist Krist Novoselic, about the making of In Utero. You can hear our interview, and the unreleased songs, by clicking the audio link on this page. Grohl: Yeah, I think so.

#FreeAnons | The Anonymous Solidarity Network Dan Howell Gene Simmons Calls Peter Criss and Ace Frehley 'Drunks' and 'Losers' It may not be pretty, but if you ask Kiss‘ Gene Simmons a question, you can pretty much always count on a direct answer. Simmons’ recent chat with Rolling Stone — supposedly scheduled to promote the new Kiss book ‘Nothin’ to Lose‘ — was full of brutally forthright responses to a wide (and occasionally fairly inane) variety of questions, including the matter of whether or not he agrees with being portrayed as “the bad guy” in the dismissals of original members Peter Criss and Ace Frehley. “I am the bad guy,” responded Simmons. “I won’t stand for drunks and alcoholics who get up on stage and consider it their birthright. While it’s never fun to be branded a loser, Criss and Frehley can at least take comfort in knowing that, in Simmons’ mind, they’re only two of many. Next: Top 10 Kiss Songs of the 1970s

2013 protests in Turkey The 2013–14 protests in Turkey started on 28 May 2013, initially to contest the urban development plan for Istanbul's Taksim Gezi Park. The protests were sparked by outrage at the violent eviction of a sit-in at the park protesting the plan.[71] Subsequently, supporting protests and strikes took place across Turkey protesting a wide range of concerns, at the core of which were issues of freedom of the press, of expression, assembly, and the government's encroachment on Turkey's secularism. With no centralised leadership beyond the small assembly that organized the original environmental protest, the protests have been compared to the Occupy movement and the May 1968 events. The sit-in at Taksim Gezi Park was restored after police withdrew from Taksim Square on 1 June, and developed into an Occupy-like camp with thousands of protesters in tents, organising a library, medical center, food distribution, and their own media. Background[edit] Events leading up to the protests[edit]