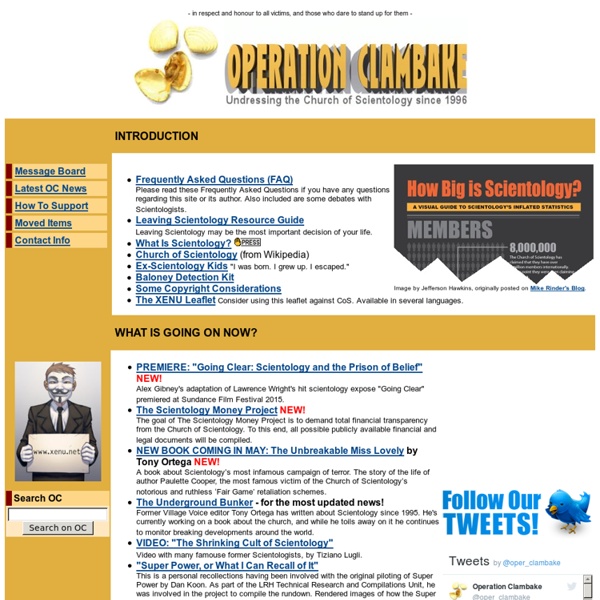 IDEAS: Economics and Finance Research Pour ne pas se laisser piéger par les sectes... Conspiracy Reality TV - Documentaries and Videos History Commons The Department of Justice, Equality and Law Reform: Report by Co On 29 November 2009, the Minister for Justice and Equality, in keeping with the statutory obligation under the Commissions of Investigation Act 2004, published Report of the Commission of Investigation into the Catholic Archdiocese of Dublin on the Department's website as well as through the Government Publications Office. The report below is, for legal reasons, a redacted version of that original report. Cover Part 1 (PDF - 161KB) Part 1 Beginning (PDF - 22KB) Part 1 (PDF - 45KB) Cover Part 2 (PDF - 167KB) Part 2 (PDF 1.44MB) Cover Appendices (PDF - 163KB) Appendices (PDF - 941KB) Further portions of report by Commission of Investigation into the handling by Church and State authorities of allegations and suspicions of child abuse against clerics of the Catholic Archdiocese of Dublin. Further Portions (PDF - 157KB) Supplementary Report into Catholic Archdiocese of Dublin Dublin Supplementary Report (PDF - 386KB)

Share International on the Reappearance of Maitreya the World Teacher Horology - The Index RWANDA: Accueil Accueil Irembo T his website assembles the rich collection of annexes that are referenced in André Guichaoua’s book, Rwanda, de la guerre au génocide (“Rwanda, from War to Genocide”). It provides the reader with complementary information that cannot be summarized in a few words or sentences. The first is to enable the reader to accede directly to information or to documents that are often difficult to obtain or, in some cases, not yet publicly released. The second concern is even more crucial. The third imperative is at the very core of this research project. Many people have documents or materials at their disposal of major importance for purposes of understanding what happened and for getting closer to the truth. André Guichaoua A Kinyarwanda translation

Benedict XVI: An apology overdue to the girls & women tortured i Wednesday, 24 February 2010 By Sharon OwensScroll down for links to watch more, and to read more about the 30,000 girls and women tortured by the Catholic Church's Sisters of Mercy, Sisters of Our Lady of Charity, Sisters of Charity and Good Shepherd Sisters in Ireland's "State-approved" Magdalene Laundries over a period spanning numerous decades, and culminating just 14 years ago in 1996 And also scroll down for link to sign Petition urging the Irish Prime Minister Brian Cowen to call for State acknowledgment of its complicity in remanding women and children to Magdalene Laundries, and to (i) offer an official apology to and (ii) establish a distinct redress scheme for victims and survivors of these abusive institutions When I was a young Catholic child in the 1970s, I was brought up to reject the British Royal family and everything it stood for: the class system, primogeniture, social elitism, the pomp and ceremony, the ritual, and the obscene wealth and privilege. Well, guess what?