How one man tracked down Anonymous 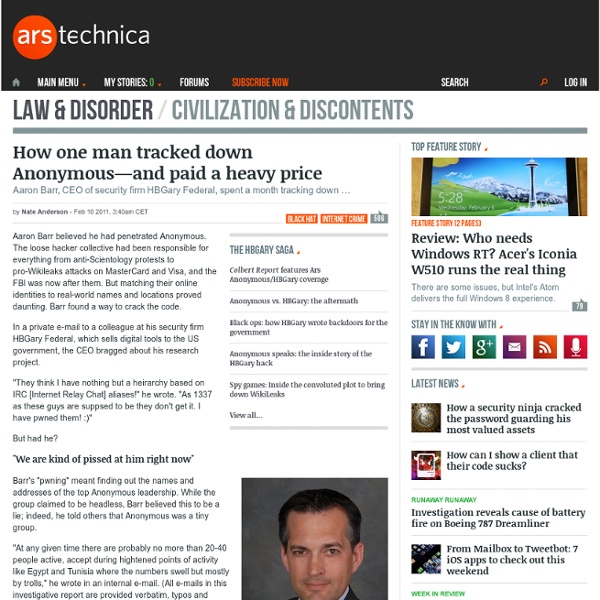 Aaron Barr believed he had penetrated Anonymous. The loose hacker collective had been responsible for everything from anti-Scientology protests to pro-Wikileaks attacks on MasterCard and Visa, and the FBI was now after them. But matching their online identities to real-world names and locations proved daunting. Barr found a way to crack the code. In a private e-mail to a colleague at his security firm HBGary Federal, which sells digital tools to the US government, the CEO bragged about his research project. "They think I have nothing but a heirarchy based on IRC [Internet Relay Chat] aliases!" But had he? "We are kind of pissed at him right now" Barr's "pwning" meant finding out the names and addresses of the top Anonymous leadership. "At any given time there are probably no more than 20-40 people active, accept during hightened points of activity like Egypt and Tunisia where the numbers swell but mostly by trolls," he wrote in an internal e-mail. Indeed, publicity was the plan. Related:  Anonymous & LulzSec

Anonymous speaks: the inside story of the HBGary hack It has been an embarrassing week for security firm HBGary and its HBGary Federal offshoot. HBGary Federal CEO Aaron Barr thought he had unmasked the hacker hordes of Anonymous and was preparing to name and shame those responsible for co-ordinating the group's actions, including the denial-of-service attacks that hit MasterCard, Visa, and other perceived enemies of WikiLeaks late last year. When Barr told one of those he believed to be an Anonymous ringleader about his forthcoming exposé, the Anonymous response was swift and humiliating. Over the last week, I've talked to some of those who participated in the HBGary hack to learn in detail how they penetrated HBGary's defenses and gave the company such a stunning black eye—and what the HBGary example means for the rest of us mere mortals who use the Internet. Anonymous: more than kids HBGary and HBGary Federal position themselves as experts in computer security. Time for an injection

TASC - Echelon 2 TASC, Inc. describes itself as "a renowned provider of advanced systems engineering, integration and decision–support services across the intelligence, defense, homeland security and federal markets." It's also a major target of our investigation due to correspondence discovered between HBGary Federal CEO Aaron Barr and TASC executives Al Pisani and John Lovegrove regarding their collaborative pursuit of the Romas/COIN contract, which was then held by Northrop Grumman . Throughout 2010, Barr exchanged dozens of e-mails with TASC executives as the two parties collaborated on building a team capable of winning the Romas/COIN contract away from Northrop; to a lesser extent, Mantech CEO Robert Frisbie was also involved in this effort, mostly in communication with Barr. From: Aaron Barr <aaron@hbgary.com> To: Pisani, Albert A. Aaron, It was good to talk to you Friday; Al and I want to move quickly to meet and explore our options to pursue COIN together. Management Profile: Peter A. T.

Home Of Happy Wheels - Happy Wheels Full Version Hello pals. I'd like to continue hosting the flash version of Happy Wheels as long as possible. With the loss of certain ad networks, I'm going to try out a few different ad formats on this site as I continue to attempt to regain some of the revenue that went missing. The discord server, which is now official at has been very helpful to me and the game. Though I would prefer to be silent, I feel obligated to say that I am still working full time on the sequel, and it's still reeeeeaally time consuming. Everything Anonymous Open Letter to Al Jazeera To Whom It May Concern: Thank you, Al Jazeera, for your outstanding coverage in the streets of Egypt. Your constant reporting and unbiased journalism has helped unite the revolutionaries, and the world. We stand with the people, waiting for Hosni Mubarak to relinquish the presidency and restore power to the people of Egypt. It is vital in this struggle that media outlets, do not become influenced by any Government or organization. As the protests escalated, so did the amount of people across the world watching Al Jazeera. The ideals of freedom and human rights are sought after throughout the globe. This has been an open letter from ANONYMOUS31 January, 2011 We do not forget,We do not forgive,We love you, Expect Us All content on this website is automatically licensed under a Creative Commons Attribution license.

How Aaron Barr Infiltrated Anonymous, and Why He Decided to Do It Ars Technica's Nate Anderson has put together a long and fascinating report on the tumultuous recent history of Aaron Barr -- the security expert who successfully infiltrated Anonymous, and then got burned, after running to the FBI with his findings. Based on e-mails he sent before beginning his mission, it's clear that Barr's motives, from the very beginning, were profit-driven. A social media fanatic, Barr firmly believed that he could use data from sites like Facebook and LinkedIn to identify any hacker in the world, including members of Anonymous. "Hackers may not list the data, but hackers are people too so they associate with friends and family," Barr wrote in an e-mail to a colleague at HBGary Federal. "Those friends and family can provide key indicators on the hacker without them releasing it...." He even wanted to give a talk at this year's Bside security conference, titled "Who Needs NSA when we have Social Media?"

the simple image sharer Indian hacker group kicked-out by Facebook The Indian arm of a hacker group 'Anonymous' - called Anonymous Operation India - has been removed from Facebook and Twitter. Both the 'Operation India' Facebook page and '@operationindia' Twitter handle are no more accessible.'Anonymous' is a 'hacktivist' group that has been linked to the recent attack on Sony as well as against the governments of Iran, Spain, New Zealand and Colombia. Their operations started in India recently and came into the limelight when they claimed to have hacked the National Informatics Centre website and the Indian Army website last week . The NIC site on the URL was defaced with graffiti that said: "We exist without nationality.

Aaron Barr HBGary is subsidiary company of ManTech International, focused on technology security. In the past two distinct but affiliated firms had carried the HBGary name: HBGary Federal, which sold its products to the US Federal Government,[3] and HB Gary, Inc.[4] Its other clients included information assurance companies, computer emergency response teams, and computer forensic investigators.[5] On February 29, 2012, HBGary, Inc. announced it was acquired by IT services firm ManTech International.[6] At the same time, HBGary Federal has been reported to be closed.[6] History[edit] The company was founded by Greg Hoglund in 2003.[1] In 2008, it joined the McAfee Security Innovation Alliance.[5] The CEO made presentations at the Black Hat Briefings, the RSA Conference, and other computer security conferences.[7][8] HBGary also analyzed the GhostNet and Operation Aurora events.[3][7] As of 2010, it had offices in Sacramento, California, Washington, D.C., and Bethesda, Maryland.[2] Fallout[edit]

It's finally possible! In ‘Anonymous’ Raids, Feds Work From List of Top 1,000 Protesters | Threat Level It turns out there’s a method behind the FBI’s raids of suspected Anonymous members around the country. The bureau is working from a list, provided by PayPal, of the 1,000 internet IP addresses responsible for the most protest traffic during Anonymous’ DDoS attacks against PayPal last December. FBI agents served 40 search warrants in January on people suspected of hosing down PayPal during ”Operation Payback” — Anonymous’ retaliatory attack against companies who blacklisted WikiLeaks. An FBI affidavit first published Tuesday by an NBC affiliate in Dallas lays out how the FBI decided on its targets, and suggests the bureau may have plenty more. According to the affidavit, by FBI agent Chris Thompson, PayPal security officials were in close contact with the bureau beginning on December 6, two days after PayPal froze WikiLeaks’ donation account and the first day it began receiving serious denial-of-service traffic. The full affidavit is below. (Photo courtesy gaelx) Anonymous Affidavit

A sinister cyber-surveillance scheme exposed | Barrett Brown When President Eisenhower left office in 1960, he provided the American people with a warning. "In the councils of government, we must guard against the acquisition of unwarranted influence, whether sought or unsought, by the military-industrial complex. The potential for the disastrous rise of misplaced power exists and will persist." Sixty years later, the military-industrial complex has been joined by another unprecedented centre of what has increasingly proven to be "misplaced power": the dozens of secretive firms known collectively as the intelligence contracting industry. Last February, three of these firms – HBGary Federal, Palantir and Berico, known collectively as Team Themis – were discovered to have conspired to hire out their information war capabilities to corporations which hoped to strike back at perceived enemies, including US activist groups, WikiLeaks and journalist Glenn Greenwald.

The nightmarish hybrid taxidermy that could land 'Franken-artist' in jail By Daily Mail Reporter Updated: 06:44 GMT, 19 December 2011 Like a modern day Dr Frankenstein, Enrique Gomez De Molina creates hauntingly stunning hybrid sculptures made from the stuffed parts of dead animals. But it is his beloved mythical creatures that could land the Miami artist in jail for up to five years and see him forking out $250,000 in fines. De Molina uses the parts of once-living animals and merges them together to create strange beings, one example features the head of two swans on the body of a goat and another shows the head of a squirrel meshed with a crab. Mythical: The surreal sculptures feature a doubles head swan on the body of what appears to be a goat Creepy: This otherworldly piece is created with the head of a screaming squirrel and the body of crab Nightmarish: This taxidermy Sculpture called the McSparboe Salmonella is a mix of a rooster and a goat Weird: In this strange example De Molina merges a goat's head and hooves with the body and tail of a skunk

LulzSec hacking suspect ‘Topiary’ arrested in the Shetland Islands An 18-year old man has been arrested by British police in Shetland, UK, under suspicion of launching hacking attacks against a number of websites. Officers from the Metropolitan Police Service's Police Central e-Crime Unit (PCeU) arrested the man as part of an international investigation into the activities of the Anonymous and LulzSec hacktivist groups. The man, who was arrested at a residential address in Shetland, is said to have used the online nickname "Topiary" and acted as a spokesperson for the groups via forums such as Twitter. The suspected hacker is currently being transported to a central London police station, and a search is taking place at his home. "Topiary" has been identified in the past as having a leading role in hactivist attacks launched by the LulzSec and Anonymous groups. In recent months the LulzSec gang have hacked and launched denial-of-service attacks against a number of high profile websites including The Sun , the CIA , SOCA , Sony , PBS and the US Senate .