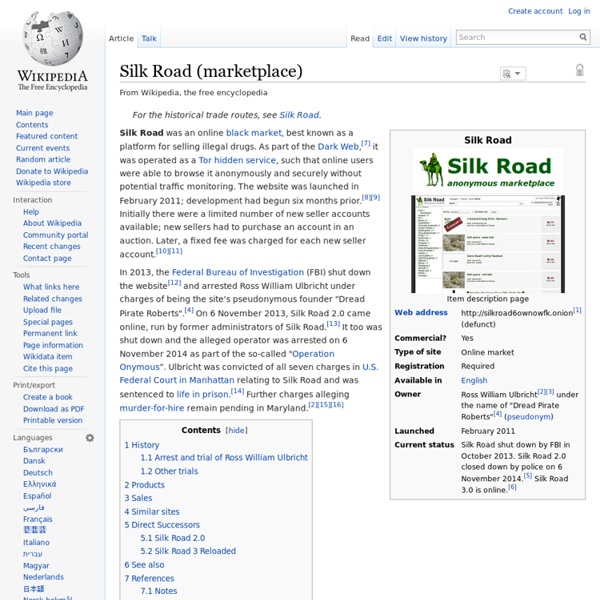 For the historical trade routes, see Silk Road. In 2013, the Federal Bureau of Investigation (FBI) shut down the website[12] and arrested Ross William Ulbricht under charges of being the site's pseudonymous founder "Dread Pirate Roberts".[4] On 6 November 2013, Silk Road 2.0 came online, run by former administrators of Silk Road.[13] It too was shut down and the alleged operator was arrested on 6 November 2014 as part of the so-called "Operation Onymous”. Ulbricht was convicted of all seven charges in U.S. Federal Court in Manhattan relating to Silk Road and was sentenced to life in prison.[14] Further charges alleging murder-for-hire remain pending in Maryland.[2][15][16] Silk Road was founded in February 2011.[17] The name "Silk Road" comes from a historical network of trade routes, started during the Han Dynasty (206 BC – 220 AD), between Europe, India, China, and many other countries on the Afro-Eurasian landmass. Impact of the seizure on the USD/Bitcoin exchange rate

anonymoX How And Why To Get To Silk Road I’m sure by now many of you have heard about Silk Road. It is the anonymous marketplace. It is the Amazon.com for all things illegal. Silk Road is not easy to get to, for various reasons. Although Tor is amazing technology and continues to improve over time, it is not fail safe. Even though I highly recommend running Linux full-time when online, it is not necessary in order to visit Silk Road. Once you have Tor running successfully you will need to direct your browser to the Silk Road URL. After you finish creating your profile you should be able to browse through a wide selection of illegal goods and services. So, now that you know how to get to Silk Road I encourage you to do so, but with the utmost safety in mind. I fully suspect that other, more revolutionary, services will come about in time. What other goods and services do you think are likely to pop up in an anonymous marketplace?

super memory, for babies Overview[edit] The ability to recall images in great detail for several minutes is found in early childhood (between 2% and 10% of that age group) and is unconnected with the person's intelligence level.[citation needed] Like other memories, they are often subject to unintended alterations. The ability usually begins to fade after the age of six years, perhaps as growing vocal skills alter the memory process.[2][3] A few adults have had phenomenal memories (not necessarily of images), but their abilities are also unconnected with their intelligence levels and tend to be highly specialized. In extreme cases, like those of Solomon Shereshevsky and Kim Peek, memory skills can actually hinder social skills.[4] Persons identified as having a related condition known as Highly Superior Autobiographical Memory (HSAM)[1] are able to remember very intricate details of their own personal life, but this ability seems not to extend to other, non-autobiographical information. Skeptical views[edit]

Proxy 4 Free - Public Proxy Servers, Anonymous Proxy, Proxy List - Protect Your Online Privacy! Traveling the Silk Road: A Study of the Online Black Market (Translated from the original Italian) Yes guys, when we think to the Deep Web, the media tell us only about its dark side, as it's considered a paradise for cybercrime and a place to escape, but is it all true? Governments want you stay far from hidden web, because they cannot spy on you. Crime in the Deep Web is only as prevalent as it is in the clear web, and we have described it in detail in the upcoming Boo, the "Deep Dark Web". Of course, the anonymity granted by the Deep Web could encourage and facilitate criminal activities, but at same time it represents an obstacle to the criminal in that, such as for those who desire to steal sensitive information of users or wish to spy on them. Meanwhile, on the clear web, we are able to find many reports produced by security firms on cyber criminal activities and their related earnings, and we know relatively little about the profits related to the Deep Web. First of all, where is the Silk Road? Which are the most sold products? Conclusions

Proxy.org - The Proxy Authority Anonymity Networks. Don't use one, use all of them! Introduction The 3 major anonymity networks on the Internet are Tor/Onionland, I2P and Freenet. If you feel confused on which one is the "best" one to use the answer is simple. Use all three! Each anonymity network is designed for a different specific purpose. One network alone cannot do what the three can do together. Tor/Onionland Tor is an anonymous Internet proxy. Onionland uses the same method to connect to machine identified by a cryptographic public key. Positive Parts of Tor/Onionland: Written In C, that means that it is fast and generally low memory usage.Very easy and simple user interface. Negative Parts of Tor/Onionland: Written in C. The best use for Tor is anonymous proxying to the regular Internet. FreeNet Freenet is an anonymous data publishing Network and is very different from Tor and I2P. Freenet is a big truck you dump stuff on while I2P is a series of Tubes. Freenet uses UDP and is the "oldest" of the 3 Networks. Positive Parts of FreeNet: Negative Parts of Freenet: See Also

Traditional Chinese medicine Traditional Chinese medicine (TCM; simplified Chinese: 中医; traditional Chinese: 中醫; pinyin: zhōng yī; literally: "Chinese medicine") is a broad range of medicine practices sharing common concepts which have been developed in China and are based on a tradition of more than 2,000 years, including various forms of herbal medicine, acupuncture, massage (Tui na), exercise (qigong), and dietary therapy.[1] It is primarily used as a complementary alternative medicine approach.[1] TCM is widely used in China.[1] The doctrines of Chinese medicine are rooted in books such as the Yellow Emperor's Inner Canon and the Treatise on Cold Damage, as well as in cosmological notions such as yin-yang and the five phases. Starting in the 1950s, these precepts were standardized in the People's Republic of China, including attempts to integrate them with modern notions of anatomy and pathology. In the 1950s, the Chinese government promoted a systematized form of TCM.[11] History[edit] Yin and yang[edit] Qi[edit]

Anonymouse.org AnonWWW Many mice surf the web under the illusion that their actions are private and anonymous. Unfortunately, this is not the way it is. Adverts Members | Terms of Service | Privacy Policy | Help / FAQ | Contact Info Tor vs. I2P: The Great Onion Debate Tor vs. I2P: The Great Onion Debate In my recent Darknet series, I attempted to connect the dots on the Deep Web. I covered the two largest anonymity networks on the Internet today, Tor and I2P. With this article, I am going answer those questions and better explain the pros and cons of each, breaking down the networks, pitfalls, and things you should know to be safe. Back to Onions Tor and I2P are both anonymizing networks, allowing people to tunnel out of their open and non-secure environments. As a quick recap, onion routing involves wrapping your packets in multiple layers of encryption, in a system where each router that passes it along only has the key to decrypt its layer and none of the others. Tor Tor has been around quite a while longer then I2P. The only reason anyone would be changing the I2P config would be to set up port forwarding, and that's a bit out of this article's scope (though a great idea for a future one). I2P was designed with the internal network in mind.

Ayurveda Ayurveda (Sanskrit Āyurveda आयुर्वेद, "life-knowledge"; English pronunciation /ˌaɪ.ərˈveɪdə/[1]) or Ayurvedic medicine is a system of traditional medicine native to the Indian subcontinent and a form of alternative medicine. The oldest known Ayurvedic texts are the Suśrutha Saṃhitā and the Charaka Saṃhitā. These Classical Sanskrit texts are among the foundational and formally compiled works of Ayurveda. Charak By the medieval period, Ayurvedic practitioners developed a number of medicinal preparations and surgical procedures for the treatment of various ailments.[2] Practices that are derived from Ayurvedic medicine are regarded as part of complementary and alternative medicine,[3] and along with Siddha Medicine and Traditional Chinese medicine, forms the basis for systems medicine.[4] Eight components of Ayurveda[edit] Principles and terminology[edit] Several philosophers in India combined religion and traditional medicine—notable examples being that of Hinduism and Ayurveda. History[edit]