Anonymous speaks: the inside story 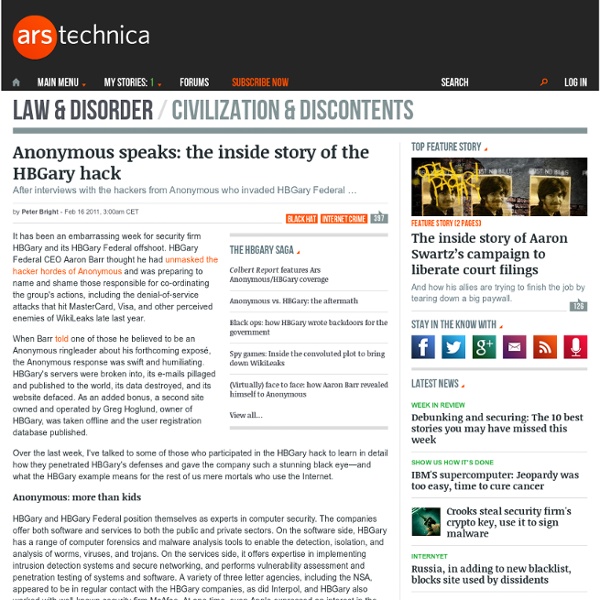 It has been an embarrassing week for security firm HBGary and its HBGary Federal offshoot. HBGary Federal CEO Aaron Barr thought he had unmasked the hacker hordes of Anonymous and was preparing to name and shame those responsible for co-ordinating the group's actions, including the denial-of-service attacks that hit MasterCard, Visa, and other perceived enemies of WikiLeaks late last year. When Barr told one of those he believed to be an Anonymous ringleader about his forthcoming exposé, the Anonymous response was swift and humiliating. HBGary's servers were broken into, its e-mails pillaged and published to the world, its data destroyed, and its website defaced. Over the last week, I've talked to some of those who participated in the HBGary hack to learn in detail how they penetrated HBGary's defenses and gave the company such a stunning black eye—and what the HBGary example means for the rest of us mere mortals who use the Internet. Anonymous: more than kids Time for an injection

Barr resigns over Anon hack High performance access to file storage HBGary Federal chief exec Aaron Barr has resigned in a bid to allow the firm to draw a line under the continuing revelations from the Anonymous hack attack. Barr was the prime mover in plans to out senior members of Anonymous at the B-Sides security conference last month. But hunter became hunted after the more skilled members of Anonymous hacked into HBGary Federal's computer network before publishing its email database. The emails included the revelation that Morgan Stanley, a HBGary client, was hit by the Operation Aurora attacks of late 2009, as well as messages that purported to show HBGary was planning a dirty tricks campaign against WikiLeaks. HBGary, while admitting it was hacked and not denying the authenticity of any particular message, has said that the notorious mischief maker at Anonymous had plenty of opportunity to alter the published emails.

UPDATED: The HB Gary Email That Should Concern Us All As I wrote yesterday , there is a leaked email that has gotten surprisingly little attention around here. It's the one where Aaron Barr discusses his intention to post at Daily Kos - presumably something negative about Anonymous, the hacking group. But that's not the email I'm talking about here. As I also mentioned yesterday, in some of the emails, HBGary people are talking about creating "personas", what we would call sockpuppets. But for a defense contractor with ties to the federal government, Hunton & Williams, DOD, NSA, and the CIA - whose enemies are labor unions, progressive organizations, journalists, and progressive bloggers, a persona apparently goes far beyond creating a mere sockpuppet. Persona management entails not just the deconfliction of persona artifacts such as names, email addresses, landing pages, and associated content. Yes!!! In another Word document, one of the team spells out how automation can work so one person can be many personas: Really? That's me. Link

Session Start: Mon Feb 07 03:17:59 2011 Session How one man tracked down Anonymous&mdash;and paid a heavy price Aaron Barr believed he had penetrated Anonymous. The loose hacker collective had been responsible for everything from anti-Scientology protests to pro-Wikileaks attacks on MasterCard and Visa, and the FBI was now after them. But matching their online identities to real-world names and locations proved daunting. Barr found a way to crack the code. In a private e-mail to a colleague at his security firm HBGary Federal, which sells digital tools to the US government, the CEO bragged about his research project. "They think I have nothing but a heirarchy based on IRC [Internet Relay Chat] aliases!" But had he? "We are kind of pissed at him right now" Barr's "pwning" meant finding out the names and addresses of the top Anonymous leadership. "At any given time there are probably no more than 20-40 people active, accept during hightened points of activity like Egypt and Tunisia where the numbers swell but mostly by trolls," he wrote in an internal e-mail. Indeed, publicity was the plan.

BoA Fraud & Corruption Docs. Anonymous on the ropes This blog set to diaplay 20 days of posts. Sorry Blogspot only shows 3 days, waiting for a Google fix, G Prologue: Anonymous has no idea of the shit storm headed their way. Our "paradigm engine" and BSU's picked up the intel. This paradigm intelligence is predicated on those findings. Good Luck Guys G The Post Wikileaks and Anonymous current cyber war is doomed. It is not a fight for free speech, They are not publishing material wrong doings, they are publishing everything, just to violate privacy. This act against WWW privacy will have deep and long reaching effects on Anonymous and Wilileaks. Very negative impacts. Wikileaks and Anonymous fight against privacy is EVIL. Wikileaks primary motive seems to be profit $$$, just like the Wall St Banks, without morals. They are at risk in this fight, because their cause is BAD. Even Gov.s have a right to privacy, now I'm not talking about releasing reports on US wrong doing, that they might be able to get away with. privacy, a very big NO NO on the WWW.

Anonymous victim HBGary goes to ground 16 February 2011Last updated at 18:33 HBGary's website was replaced with a logo and statement from Anonymous The computer security company hacked by members of activist group Anonymous has gone to ground as further revelations about its activities leak online. HBGary has cancelled its appearances at public events, saying that members of staff had been threatened. It follows the release of internal documents which appear to show the firm offered to smear Wikileaks' supporters. HBGary officials said the online messages could have been altered prior to publication. The company's founder, Greg Hoglund had been scheduled to give a talk at the RSA Security conference in San Francisco this week, but pulled out at the last minute. The company also withdrew from an associated exhibition. "In an effort to protect our employees, customers and the RSA Conference community, HBGary has decided to remove our booth and cancel all talks," it said in a statement posted on its website. Government payload

Corporate plot to silence WikiLeaks revealed Sunday, February 20, 2011 Leaked emails have revealed a plot by private internet security firms to bring down WikiLeaks. The plot was allegedly created on behalf of the Bank of America — the largest bank in the US. WikiLeaks editor-in-chief Julian Assange has said Bank of America will be the subject of future leaks. Computer-hacker group Anonymous revealed the plot after stealing 50,000 internal emails from internet security company HBGary Federal. The hackers attacked the HBGary Federal website after executive Aaron Barr boasted to the media that the company was working to expose members of WikiLeaks, The New York Times said on February 11. Anonymous supported WikiLeaks in December by shutting down the websites of Visa, Mastercard and PayPal after those companies cut off WikiLeaks’ ability to raise funds via their services. The emails included a report commissioned by law firm Hunton & Williams, apparently on behalf of Bank of America, Thetechherald.com said on February 7. From GLW issue 869