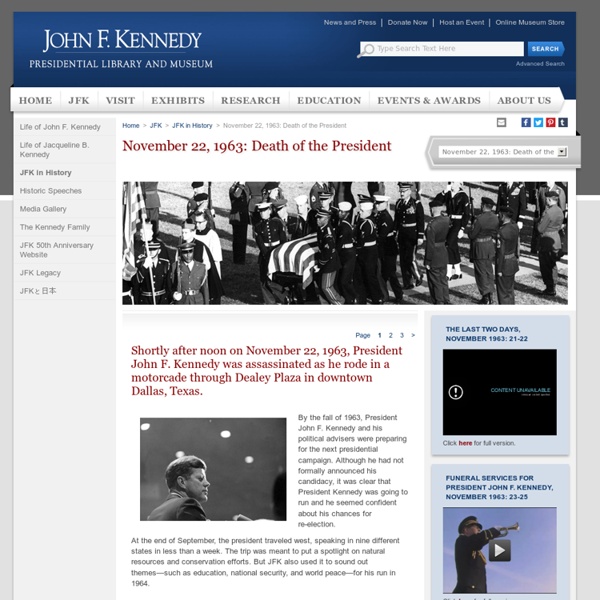 Shortly after noon on November 22, 1963, President John F. Kennedy was assassinated as he rode in a motorcade through Dealey Plaza in downtown Dallas, Texas. By the fall of 1963, President John F. At the end of September, the president traveled west, speaking in nine different states in less than a week. Campaigning in Texas A month later, the president addressed Democratic gatherings in Boston and Philadelphia. Mrs. President Kennedy was aware that a feud among party leaders in Texas could jeopardize his chances of carrying the state in 1964, and one of his aims for the trip was to bring Democrats together. The first stop was San Antonio. Morning in Fort Worth A light rain was falling on Friday morning, November 22, but a crowd of several thousand stood in the parking lot outside the Texas Hotel where the Kennedys had spent the night. The warmth of the audience response was palpable as the president reached out to shake hands amidst a sea of smiling faces.

Fact file: 10 unusual facts about JFK's assassination - Fact Check Updated The assassination of John Fitzgerald Kennedy, the 35th president of the United States, on November 22, 1963, remains one of the defining events of the 20th century. The shooting in Dallas, Texas, before thousands of onlookers was also captured by TV cameras and in home movies, yet in the minds of many, much about what happened that day remains shrouded in mystery. President Kennedy's alleged killer, Lee Harvey Oswald, was himself shot and killed as cameras rolled just two days later. Why Oswald shot Kennedy and wounded Texas governor John Connally, and whether he acted alone or was part of a wider conspiracy, has been the subject of official inquiries and countless films, books, and newspaper and magazine articles over the past 50 years. The internet has also become fertile ground for speculation and allegations of involvement by the mafia, the Russians, the Cubans and even vice-president Lyndon Johnson, who succeeded Kennedy. Kennedy was the fourth US president to be assassinated.

The Truth Behind JFK's Assassination On November 29, 1963, President Lyndon Johnson directed the Warren Commission to “evaluate all the facts” in the brutal November 22 murder of his predecessor, John F. Kennedy, on a downtown Dallas street in broad daylight. Reduced to its bare essentials, the investigation sought answers to three fundamental questions: Who, why and how? “Why” was entirely contingent on “who,” and that depended on “how.” Thus, the linchpin of the Warren Report—and every subsequent investigation—has always been precisely how Kennedy was assassinated in Dealey Plaza. In the 1964 Warren Report, just seven pages (of 888) reconstruct the shooting sequence. Try Newsweek for only $1.25 per week President John F. The story of how the Warren Commission fumbled this pivotal question is long and convoluted, and only the barest outline can be presented here. Composite of photos taken by Secret Service re-staging NARA As the Bullets Struck... The limousine carrying mortally wounded President John F. Ignoring the Evidence

John F. Kennedy assassination conspiracy theories - Wikipedia The assassination of John F. Kennedy on November 22, 1963, has spurred numerous conspiracy theories, which include accusations of involvement of the CIA, the Mafia, sitting Vice President Lyndon B. Johnson, Cuban Prime Minister Fidel Castro, the KGB, or some combination thereof. In 1964, the Warren Commission concluded that Lee Harvey Oswald was the only person responsible for assassinating Kennedy. Background[edit] Handbill circulated on November 21, 1963, one day before the assassination. President John F. In 1964, the Warren Commission concluded that Oswald had acted alone and that no credible evidence supported the contention that he was involved in a conspiracy to assassinate the president.[22] The Commission also indicated that then-Secretary of State Dean Rusk, then-Defense Secretary Robert S. The last remaining documents under Section 5 of the President John F. Public opinion[edit] According to author John C. Possible evidence of a cover-up[edit] United States Senator and U.S. E.

Findings | National Archives C. The Committee believes, on the basis of the evidence available to it, that President John F. Kennedy was probably assassinated as a result of a conspiracy. The Committee is unable to identify the other gunman or the extent of the conspiracy. Go to the footnotes for this chapter. Supreme Court Justice Oliver Wendell Holmes once simply defined conspiracy as "a partnership in criminal purposes." (1) That definition is adequate. The committee recognizes, of course, that while the work "conspiracy" technically denotes only a "partnership in criminal purposes," it also, in fact, connotes widely varying meanings to many people, and its use has vastly differing societal implications depending upon the sophistication, extent and ultimate purpose of the partnership. Conspiracies may easily range, therefore, from those with important implications for social or governmental institutions to those with no major societal significance. Page 96 Page 97 Page 98 Page 99 Top of Page Page 100 Page 104 Page 105

Who killed JFK? A guide to the Kennedy conspiracy theories Biographical drama Jackie comes to UK cinemas tomorrow, offering a fresh look on the weeks after the assassination of US president John F Kennedy from the perspective of his wife. Natalie Portman stars as Jacqueline Kennedy, while JFK is played by Caspar Phillipson, although he is barely on screen. "For what must be the first time ever, the president has been first-ladied out of the movie," says The Guardian. Nevertheless, more than 53 years on, the subject of Kennedy's death still fascinates the world. He was shot on 22 November 1963, while travelling with his wife through Dallas, Texas, in the back of an open-top convertible. Lee Harvey Oswald opened fire as the presidential motorcade passed the Texas School Book Depository at 12.30pm and the president was pronounced dead at Dallas's Parkland Hospital 30 minutes later. But the competing conclusions of the FBI investigations and government commissions have encouraged many to reject the official version. The 'magic bullet' theory Rafael Cruz