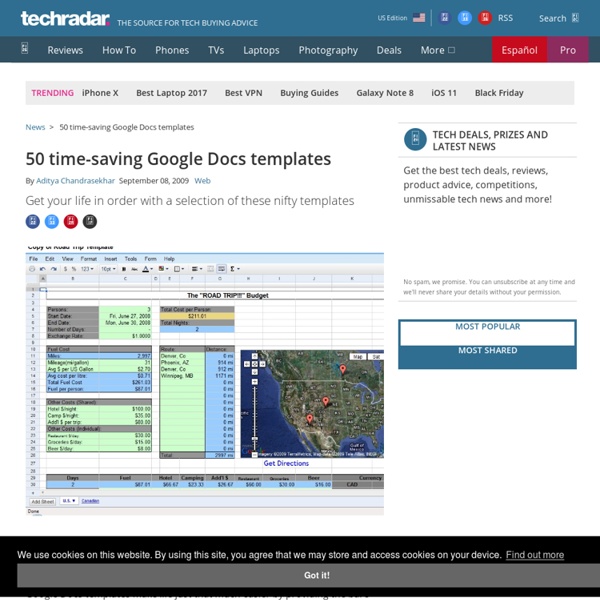 Google Docs templates make life just that much easier by providing the bare skeleton of a specific document, spreadsheet or presentation – all you have to do is fill in the blank bits with your information. There are thousands of user-submitted templates to pick from - calendars, presentation designs, fax covers, invitations and business cards are just some of what's available. With so many templates available it can be a little overwhelming searching for the good ones. So we've done the searching for you - here are 50 of the best Google Docs templates that are time saving, elegant, easy to use or simply plain genius. At home 1. 'Lose inches, tone up and get your best body' promises this template. WORKOUT: Keep your body in top form 2. Weekly spending is probably the most simple and easy to use weekly expense template there is. TRACK EXPENSES: Know exactly how your wallet has ended up empty 3. If you are very conscious about your health, the health tracker should suit your needs perfectly.

cornellintro.pdf Best Web-Based Conferencing Tool: WebEx @oneshot719: Webex is 'free' you can continue to make test accounts with fake / random emails. So judging by this poll, you can do that. I have experience using WebEX and actually using it to get major conferences together between 15-30 people all watching web presentations. It's pretty intuitive, however if you have a LARGE powerpoint file, or a movie / video you want to share, YOU DO WANT TO LOG IN EARLY AND UPLOAD IT. The powerpoint training video we used took 45 minutes to upload before we could 'share' it with everyone by the time they were scheduled to join the meeting. @PixelProphet: ok so if i own my domain i can make accounts for webex such as: webextrial1@lucaspc.com webextrial2@lucaspc.com and so on @oneshot719: You can even use thisone@hotmail.com / thisone2@hotmail.com ect without owning the email address.

5 Differences Between Hemp and Marijuana Hemp and marijuana are two popular names for the cannabis plant. The word cannabis often brings to mind images of a burning joint or a bong filling up with white smoke. Most of the time, the term wouldn’t be equated with plant-based plastics, durable paper or military grade fabric. But in reality, cannabis has just as much to do with these industrial hemp products as it does with the recreational drug better known as marijuana or pot. This begs the question — how is hemp different from marijuana? 1. A 19th century illustration of Cannabis sativa (Photo: Wikimedia Commons) Cannabis is believed to be one of the oldest domesticated crops. Tall, sturdy plants were grown by early civilizations to make a variety of foods, oils and textiles, such as rope and fabrics. Other plants were recognized for being psychoactive and were bred selectively for medical and religious purposes. 2. Chemical structure of tetrahydrocannabinol (Photo: Wikimedia Commons) 3. 4. A hemp-based skin balm sold in the U.S.

JANINE TURNER: Science about our neocortex validates our Founding Fathers' vision What do our nation’s Founders and monkeys have in common? An innate understanding about the value of community, small communities. Our Founders knew that people best governed themselves when they were in small groups. The people within these groups knew best what they needed, knew best how to make it happen and knew best how to take care of one another. A relatively new anthropological theory has revealed that the magic number for efficient communities is 150. How do monkeys fit into this? The Dunbar Number legitimizes with scientific theory what our ancestors already knew. Ever wonder why you feel so powerless regarding your influence over your supposed self-governing republic? This is one of the reasons why the majority of Americans have lost their feeling of belonging, independence, vigor and empowerment. The answer for restored liberty and self-reliance lies in the Dunbar Number.

The Manager's Handbook: 80+ Open Courseware Collections to Help You Be a Better Leader America in the 1920s, Primary Sources for Teachers, America in Class, National Humanities Center Collection of primary resources compatible with the Common Core State Standards—historical documents, literary texts, and works of art—thematically organized with notes and discussion questions. Made possible by a grant from the National Endowment for the Humanities and with the generous support of Barbara Asch and Jonathan Weissin honor of Burton J. Weiss, Jon's father. BECOMING MODERN presents an expansive collection of primary sources designed to enhance classroom study of the 1920s—a brief but defining period in American history, perhaps the first that seems immediately recognizable to us in the 21st century. Organized in five themes, each with six to eight sections, BECOMING MODERN includes a multiplicity of genres to represent the broad expansion of media in the Twenties. Films, newsreels, animated cartoons, comic strips, radio broadcasts, and sound recordings are offered in addition to informational texts, fiction selections, visual art, photographs, and music selections. Images:

Presentation lessons from Citizen Kane Citizen Kane (1941) is considered by most film critics to be among the best American films ever produced. The fact that the film's lead actor, writer, and director — the legendary Orson Welles — was only 25-years old, and it was his first movie, makes the film even that much more remarkable. It's a wonderful film that is fresh even today, but are there lessons in the making of the film that we can apply more broadly to other creative arts including presentations? I believe there are. The film was innovative and used techniques in storytelling and production that were not common for the time. Story Structure. Although the unconventional (for the time) nonlinear narrative approach is a tad confusing at times, Citizen Kane made clear use of the basics of storytelling structure: Exposition (beginning), Conflict (middle), and Resolution (end). The non-linear structure of the narrative. Citizen Kane unfolds in a nonlinear and in a sense circular way. “Create your own visual style...