Blogaway for Android (Blogger) Veemee 3D Avatar Creator - Android-apps op Google Play. Documents 5 - File manager, PDF reader and browser on the App Store. Tumblr. Tumblr is a place to discover and post about stuff you love, and join communities of people who love that same stuff. 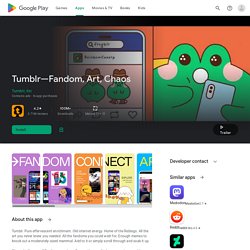 It’s pretty neat.Q: What can I post on Tumblr? A: Photos, videos, live videos, songs, text—pretty much anything.Q: Can I make GIFs? A: Yes, you CAN make GIFs! You can make them out of videos, bursts, live photos, or just shoot them on the spot.Q: What’s the deal with “reblogging”? A: It’s a way to take the stuff you find on Tumblr and make it your own. WordPress. Blogger. List My Apps. Charlesmadere/that-lil-hummingbird: fan-made Android app for. OCHA NEKO 茶猫 par OchaaNeko. Text from computer, tablet and smartphone with our mysms apps. Tablet Talk: SMS & Texting App. Tablet Talk is a tablet SMS texting app that lets you text from a tablet and even make voice calls, while your phone stays in your pocket! 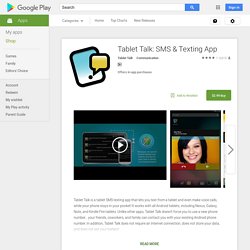 It works with all Android tablets, including Nexus, Galaxy, Note, and Kindle Fire tablets. Unlike other apps, Tablet Talk doesn't force you to use a new phone number... your friends, coworkers, and family can contact you with your existing Android phone number. In addition, Tablet Talk does not require an Internet connection, does not store your data, and does not eat your battery! Our customers love Tablet Talk! 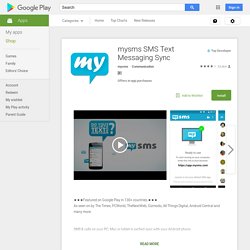 ★★★As seen on by The Times, PCWorld, TheNextWeb, Gizmodo, All Things Digital, Android Central and many more.SMS & calls on your PC, Mac or tablet in perfect sync with your Android phone. ● Text from computer and tablet (real SMS and MMS) using your Android #● Call notifications on your computer - when you receive a call on your phone● The only remote texting app with native apps for Android tablet, iPad, Windows 7/XP, Windows 8 desktop & tablet, Mac OS X and Chrome● Complete call log history from your Android on your PC & tablet● MMS Group Chat (group messaging)● Multimedia messages (picture messages and files)● Support for any browser (Chrome, Internet Explorer, Firefox, Safari, Opera …)To connect your computer or tablet to your Android phone, download this app on your phone and register for an account. 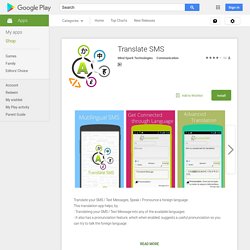 This translation app helps, by : - Translating your SMS / Text Message into any of the available languages - It also has a pronunciation feature, which when enabled, suggests a useful pronunciation so you can try to talk the foreign language. Target App Users: - Tourist / Travellers to a foreign country - Communicate with relatives who do not know how to read / write in English - Useful for sending out messages in languages that do not have an easy native language keyboard - Language Learners who are trying to learn a foreign language, this app provides a pronunciation guide. Privacy - We do not collect any personal information at all in this app. - This free app uses Advertisements from AD networks. This free app has an outgoing send limit of 5 translated messages PER day. 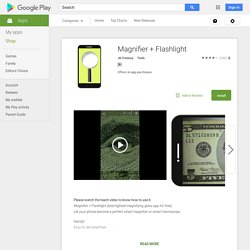 Magnifier + Flashlight (best lighted magnifying glass app for free)Let your phone become a perfect smart magnifier or smart microscope. Handy! Easy to see small text.Open flashlight when start APP. You can also use it as a simple version of the skin quality check device. (Skin detector) [Quick Magnifier Camera Guideline]When you start camera, the APP will set the magnifier zoom to middle value. You can use the following method to change other settings:1. [Others]1. 【Recommended External Photo Editor】( Line Camera ) APP is now tested more compatible. Or you can use system photo editor, it also work. Tap Counter Manager. Day Counter.