CasperJS, a navigation scripting and testing utility for PhantomJS and SlimerJS 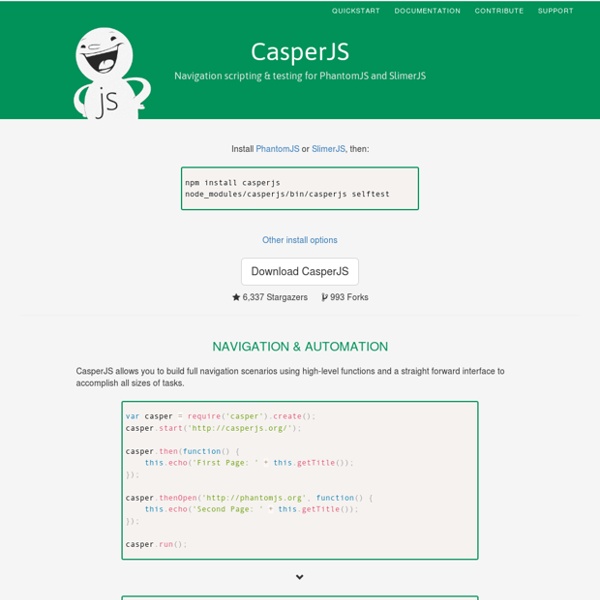 Casper.js is released under the terms of the MIT license. Copyright (c) 2011-2013 Nicolas Perriault Permission is hereby granted, free of charge, to any person obtaining a copy of this software and associated documentation files (the "Software"), to deal in the Software without restriction, including without limitation the rights to use, copy, modify, merge, publish, distribute, sublicense, and/or sell copies of the Software, and to permit persons to whom the Software is furnished to do so, subject to the following conditions: The above copyright notice and this permission notice shall be included in all copies or substantial portions of the Software. THE SOFTWARE IS PROVIDED "AS IS", WITHOUT WARRANTY OF ANY KIND, EXPRESS OR IMPLIED, INCLUDING BUT NOT LIMITED TO THE WARRANTIES OF MERCHANTABILITY, FITNESS FOR A PARTICULAR PURPOSE AND NONINFRINGEMENT.

Automated cross browser testing with JavaScript Does DalekJS depend on Selenium? Short answer: No. Dalek uses the WebDriver JSON-Wire protocol to communicate with the browsers it utilitizes, when applicable. The WebDriver specification evolved out of the Selenium project, after which it was submitted as a draft to the W3C. So, in some ways, Dalek's existence would not be possible without the work the Selenium project has done so far. However, as Dalek's only dependency is node.js, there is no need to install Java or download the Selenium.jar file.

Continuos Integration (CI) for JavaScript – Jasmine and Teamcity Web applications are using more JavaScript than ever before. The following image (thanks to Gineer) shows the shift in the architecture types of web applications from simple thin clients to thicker clients driven by rich presentations and client logic. Since most of the newer web applications include business logic embedded into the client using JavaScript, we must put assurances to make sure the quality of the application is not compromised over time. In most cases, the JavaScript side of the applications goes untested or is not automated which is a bad idea. I have selected the following tools to be able to provide Continuous Integration to Rich Internet Applications: Jasmine is a testing framework for JavaScript.

Help Scout Developers - Front-end Testing for the Lazy Developer with CasperJS If you pride yourself on possessing the 3 Virtues of a Great Programmer, then you probably hate writing automated test suites. Writing comprehensive suites of Unit tests flies directly in the face of everything we Great Programmers stand for. Why would a lazy, impatient developer who never makes mistakes need to waste all that time, anyway? Most of the time, all you want is an automated way to make sure your application is functioning properly at a high level. Do you really need to write mountains of Unit tests to do this?

Building a Text-Based UI with Backbone and Charm I am a little framework averse. When I write a program, I like to build from scratch as far as it is practical. Not using a framework gives me the feeling that I am so in control of my own destiny. But having said that, I will sometimes succumb to using a framework when it's very clear that the use of the framework will result in significantly less code, and/orsignificantly less complexity I recently rewrote a text-based user interface using Backbone, and as far as I know, that is a framework. Scrapy Tutorial — Scrapy 1.0.3 documentation In this tutorial, we’ll assume that Scrapy is already installed on your system. If that’s not the case, see Installation guide. We are going to use Open directory project (dmoz) as our example domain to scrape. This tutorial will walk you through these tasks: Creating a new Scrapy projectDefining the Items you will extractWriting a spider to crawl a site and extract ItemsWriting an Item Pipeline to store the extracted Items

Organizing your application using Modules (require.js) - Backbone.js Tutorials Unfortunately Backbone.js does not tell you how to organize your code, leaving many developers in the dark regarding how to load scripts and lay out their development environments. This was quite a different decision to other JavaScript MVC frameworks who were more in favor of setting a development philosophy. Hopefully this tutorial will allow you to build a much more robust project with great separation of concerns between design and code. This tutorial will get you started on combining Backbone.js with AMD (Asynchronous Module Definitions). What is AMD?

Frontend testing with phantomjs and casperjs ~ Robert Basic ~ the magic of coding... I am not usually fond of doing much frontend stuff, but I do like to dable in some javascript from time to time. Nothing fancy, no node.js, coffeescript and the likes for me. I still feel like making applications on the server side, and have the client just show things to the user.

iodine (IP-over-DNS, IPv4 over DNS tunnel) iodine Latest (from 2014-06-16): 0.7.0 Download source / binaries: win32/64, android Older downloads available below. iodine lets you tunnel IPv4 data through a DNS server. This can be usable in different situations where internet access is firewalled, but DNS queries are allowed. It runs on Linux, Mac OS X, FreeBSD, NetBSD, OpenBSD and Windows and needs a TUN/TAP device. NodeJS Console Object Debug Inspector - Thomas Hunter - Web Development Tutorials and Personal Opinions The NodeJS Console Object Debug Inspector, or simply node-codein, is a tool for providing a visual debugger of global node variables, as well as executing code inside of your running process. Think of it as a GUI REPL for a running node process. This GUI is run in a browser (it works best with Chrome, maybe only with Chrome). It provides expandable and collapsable nodes when dealing with hierarchal data, has syntax highlighting depending on the type of data involved. It will mirror your console.log() commands (they are shown in both the terminal as well as the GUI).

Testing a Distributed System Distributed Development Philip Maddox Distributed systems can be especially difficult to program, for a variety of reasons. They can be difficult to design, difficult to manage, and, above all, difficult to test. Testing a normal system can be trying even under the best of circumstances, and no matter how diligent the tester is, bugs can still get through. Now take all of the standard issues and multiply them by multiple processes written in multiple languages running on multiple boxes that could potentially all be on different operating systems, and there is potential for a real disaster.