OAuth — An open protocol to allow secure API authorization in a 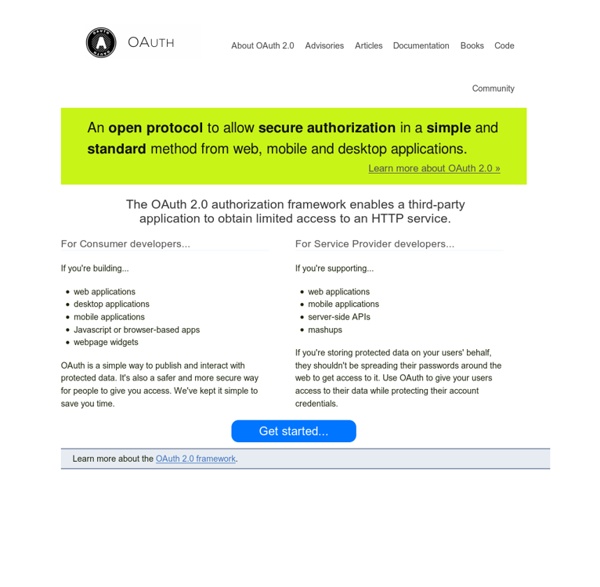 For Consumer developers... If you're building... web applications desktop applications mobile applications Javascript or browser-based apps webpage widgets OAuth is a simple way to publish and interact with protected data. It's also a safer and more secure way for people to give you access. We've kept it simple to save you time.

Telecommunications data retention In the field of telecommunications, data retention (or data preservation) generally refers to the storage of call detail records (CDRs) of telephony and internet traffic and transaction data (IPDRs) by governments and commercial organisations. In the case of government data retention, the data that is stored is usually of telephone calls made and received, emails sent and received and web sites visited. Location data is also collected.

LemonLDAP - Wiki - Main - WebHome Introduction Lemonldap::NG provide SSO to Web based applications. The main program is an Apache Handler, acting like a reverse proxy for protected applications. LemonLDAP::NG is the new version of Lemonldap (founded by Eric German) which is no more maintened. The project leaderis Xavier Guimard. It comes from a french administration project, managed by the MINEFI and the Gendarmerie Nationale. Authorization Roles in CRM Web Channel (SAP Library - SAP CRM: Business Scenario and Business Process Configuration) Use You assign authorization roles to your users in CRM Web Channel to determine which applications they can enter and the tasks they can carry out in these applications. There are two types of authorization roles provided by SAP: ● For service users There is a service user role for each Web-based application to provide an anonymous stateless RFC connection between the Web-based application and the backend SAP CRM system. ● For Internet users

2.0 — OAuth OAuth 2.0 is the industry-standard protocol for authorization. OAuth 2.0 supersedes the work done on the original OAuth protocol created in 2006. OAuth 2.0 focuses on client developer simplicity while providing specific authorization flows for web applications, desktop applications, mobile phones, and living room devices. This specification and its extensions are being developed within the IETF OAuth Working Group. Questions, suggestions and protocol changes should be discussed on the mailing list.

Bastion » A blog about J2EE Security, WebLogic, authentication, authorization, auditing, and PKI According to the Java Servlet Specification, there are four standard methods of authentication in web applications: FORM, BASIC, DIGEST, and CLIENT-CERT. FORM is quite common, but BASIC and DIGEST are not. CLIENT-CERT is primarily used for client certificate authentication but it has more to offer than you might imagine from the name. OAuth For MediaWiki's (the software used by Wikipedia) OAuth support, see mw:Help:OAuth OAuth is an open standard for authorization, commonly used as a way for Internet users to log into third party websites using their Microsoft, Google, Facebook or Twitter accounts without exposing their password.[1] Generally, OAuth provides to clients a 'secure delegated access' to server resources on behalf of a resource owner. It specifies a process for resource owners to authorize third-party access to their server resources without sharing their credentials.

How Apple and Amazon Security Flaws Led to My Epic Hacking In the space of one hour, my entire digital life was destroyed. First my Google account was taken over, then deleted. Next my Twitter account was compromised, and used as a platform to broadcast racist and homophobic messages. And worst of all, my AppleID account was broken into, and my hackers used it to remotely erase all of the data on my iPhone, iPad, and MacBook.

Authentication and Authorization Authentication is any process by which you verify that someone is who they claim they are. Authorization is any process by which someone is allowed to be where they want to go, or to have information that they want to have. For general access control, see the Access Control How-To. GitHub API OAuth2 is a protocol that lets external applications request authorization to private details in a user's GitHub account without getting their password. This is preferred over Basic Authentication because tokens can be limited to specific types of data, and can be revoked by users at any time. All developers need to register their application before getting started. A registered OAuth application is assigned a unique Client ID and Client Secret. The Client Secret should not be shared.