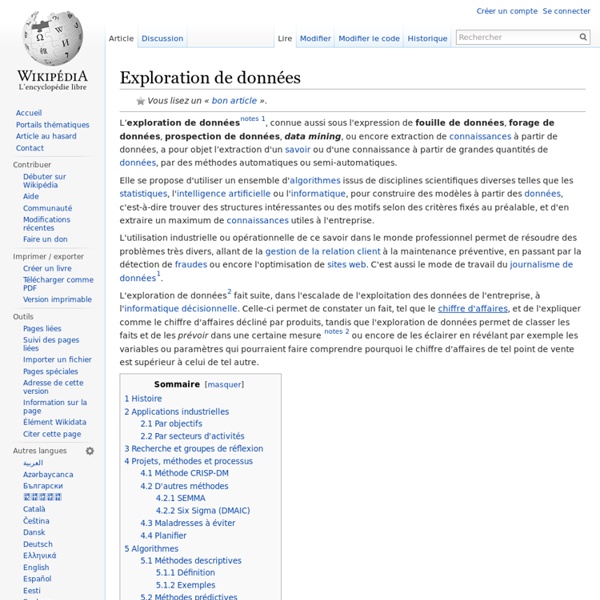 ShareLatex Mind maps To see the corresponding video for this blog post click here. In this post we’re going to show you how to create mind maps using TikZ. To create this post we’ve adapted and simplified an example found in chapter six of the TikZ documentation, so if you want to go into greater detail on this topic, make sure you check out the extensive documentation. To get started, we load up a the TikZ package and the ‘mindmap’ TikZ library. Domain-driven design Domain-driven design (DDD) is an approach to software development for complex needs by connecting the implementation to an evolving model.[1] The premise of domain-driven design is the following: Core definitions[edit] Prerequisites for the successful application of DDD[edit] Data mining Data mining is the process of discovering patterns in large data sets involving methods at the intersection of machine learning, statistics, and database systems.[1] Data mining is an interdisciplinary subfield of computer science and statistics with an overall goal to extract information (with intelligent methods) from a data set and transform the information into a comprehensible structure for further use.[1][2][3][4] Data mining is the analysis step of the "knowledge discovery in databases" process or KDD.[5] Aside from the raw analysis step, it also involves database and data management aspects, data pre-processing, model and inference considerations, interestingness metrics, complexity considerations, post-processing of discovered structures, visualization, and online updating.[1] Etymology[edit] In the 1960s, statisticians and economists used terms like data fishing or data dredging to refer to what they considered the bad practice of analyzing data without an a-priori hypothesis.

Domain-driven design Domain-driven design (DDD) is an approach to software development for complex needs by connecting the implementation to an evolving model.[1] The premise of domain-driven design is the following: Concepts[edit] Concepts of the model include: Context The setting in which a word or statement appears that determines its meaning; Domain Data Mining: What is Data Mining? Overview Generally, data mining (sometimes called data or knowledge discovery) is the process of analyzing data from different perspectives and summarizing it into useful information - information that can be used to increase revenue, cuts costs, or both. Data mining software is one of a number of analytical tools for analyzing data. In Turkey, Renewed Anti-Government Protests - In Focus One day last summer, as anti-government protests roiled Istanbul, a 14-year-old boy named Berkin Elvan was on his way to buy bread when he was struck in the head by a tear gas canister. After spending months in a coma, Berkin died this week -- reigniting anger at Prime Minister Recep Tayyip Erdogan and sending thousands back into the streets in dozens of cities. Riot police were quick to react, disrupting demonstrations with water cannons, clubs, and more tear gas.

eVa's walking Researchers are claiming a record efficiency of 15.6 percent for a new graphene-based solar cell (Image: Shutterstock) In 2012, researchers from the University of Florida reported a record efficiency of 8.6 percent for a prototype solar cell consisting of a wafer of silicon coated with a layer of graphene doped with trifluoromethanesulfonyl-amide (TFSA). Now another team is claiming a new record efficiency of 15.6 percent for a graphene-based solar cell by ditching the silicon all together. The prototype photovoltaic device, created by researchers from the Group of Photovoltaic and Optoelectronic Devices (DFO) at Spain's Universitat Jaume I in Castelló and Oxford University, uses a combination of titanium oxide and graphene as a charge collector and perovskite as a sunlight absorber.

Learning analytics Learning analytics is the measurement, collection, analysis and reporting of data about learners and their contexts, for purposes of understanding and optimising learning and the environments in which it occurs.[1] A related field is educational data mining. For general audience introductions, see: The Educause Learning Initiative Briefing [2]The Educause Review on Learning analytics [3]And the UNESCO "Learning Analytics Policy Brief" (2012)[4] Are data mining and data warehousing related? - HowStuffWorks Both data mining and data warehousing are business intelligence tools that are used to turn information (or data) into actionable knowledge. The important distinctions between the two tools are the methods and processes each uses to achieve this goal. Data mining is a process of statistical analysis.

Holi 2014: The Festival of Colors This week Hindus around the world celebrate Holi, the Festival of Colors. Holi is a popular springtime celebration observed on the last full moon of the lunar month. Participants traditionally throw bright, vibrant powders at friends and strangers alike as they celebrate the arrival of spring, commemorate Krishna's pranks, and allow each other a momentary freedom -- a chance to drop their inhibitions and simply play and dance.