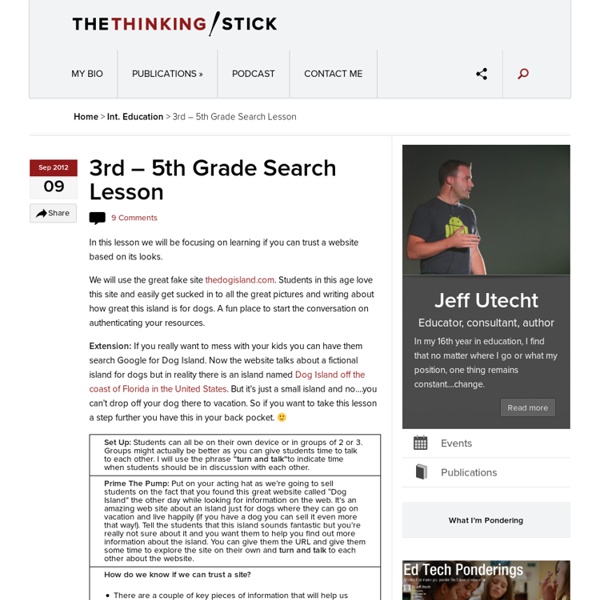 In this lesson we will be focusing on learning if you can trust a website based on its looks. We will use the great fake site thedogisland.com. Students in this age love this site and easily get sucked in to all the great pictures and writing about how great this island is for dogs. A fun place to start the conversation on authenticating your resources. A look at the search result for the linkto: have a discussion about this page and how using linkto: can help tell us who is linking to a web page. Downloads this Lesson Google Docs Format 3-5 Search Lesson Plan (490.8 KiB, 15,745 hits) Other Search Lesson Plans K-2 Lesson Plan Reasoning

Boilerplate’s Origins Paul came up with the concept for Boilerplate years before the robot appeared in our books. Initially, he thought about using it in a graphic novel. That evolved into the idea of telling the robot’s story in a more “realistic” way, illustrated by doctored photographs and set against world history as a backdrop. In the year 2000, which for so long sounded like the future but is now in the past, Paul decided to post some robot stories on our website. Swiss university launches country's first ever degree in yodelling Swiss yodeller Nadja Räss will teach the course. Photo: andibrunner.com From the 2018/19 academic year it will be possible to study yodelling to degree level in Switzerland for the first time. The Lucerne University of Applied Sciences and Arts is adding yodelling to its Folk Music programme from the autumn, offering both a three-year bachelor’s and a two-year master’s degree in the alpine vocal technique, it said on its website. The university has offered folk music degrees since 2012, and it now becomes the first in the country to offer the traditional Swiss art of yodelling at degree level.

Teaching Students about Fake News in the Real World — Literacy Ideas Whatever Donald Trump’s legacy as president of the United States becomes he will forever be known as the protagonist for bringing two key terms to the modern vocabulary. “Fake News” and “Alternative Truths” Whilst Trump’s delivery and intent of these terms are contentious there is no debate he called out the elephant in the room when talking about news and journalism in the context of modern technology. Facebook, Twitter, blogging and an endless army of social media tools have provided a platform for anyone with a WiFi connection and a device the opportunity to voice their opinion and consider themselves a journalist, social crusader, paid opinion or blatant liar... The propagation of questionable “news” content has skyrocketed out of control at pace with the growth of the internet. Content creation today is virtually free without any need for fact-checking or validation.

How to identify fake news The illustration above, which shows reporters carrying various forms of fake news, was published way back in 1894 by pioneering cartoonist Frederick Burr Opper. He would have been blissfully unaware at the time of its creation, but he had just uncovered a powerful phrase that, 123 years later, would become word of the year for 2017 and which would define the credibility and legitimacy of the news, mass media and journalism throughout the 21st century. Rubber Duck Media explains below how to identify fake news and what can be done to prevent it spreading further and doing more damage.

The Smell Test: Educators can counter fake news with information literacy. Here’s how. Illustration by Steve Brodner Discerning fact from fiction in news and online content has never been more challenging. From “pizzagate”—false reports of a child sex ring operating in a DC pizza parlor—and creepy clown attacks to retweeted election headlines touting events that never happened, fake news is rampant. Turn Students into Fact-Finding Web Detectives Fact-Checking Tips and Tools for Teachers and Students Show students where to look for credible information on the web. Explain that professional fact-checkers may already have done this important work for us. Use the resources below as references for finding vetted and fact-checked information. Google Search Skills Every Student Should Know Upgrade your students' Google game!

All About Explorers All About Explorers was developed by a group of teachers as a means of teaching students about the Internet. Although the Internet can be a tremendous resource for gathering information about a topic, we found that students often did not have the skills to discern useful information from worthless data. So we set out to develop a series of lessons for elementary age students in which we would demonstrate that just because it is out there for the searching does not mean it is worthwhile. A typical novice strategy for searching the Internet is to type the topic into the address bar. For example, if you are researching Christopher Columbus, you naturally would look first at www.columbus.com.

Who Stands Between Fake News and Students? Educators Every week, Dave Stuart hands out a current news article to his world history students so they can digest and evaluate the credibility of the information and its sources. One day this fall, Stuart, now in his tenth year at Cedar Springs High School in Michigan, distributed a couple of stories about the 2016 presidential candidates. In the middle of a uniquely controversial and divisive campaign, it was perhaps inevitable that during the discussion some students would dredge up information that didn’t appear in the articles their teacher had provided. It was quickly apparent, says Stuart, that much of it was untrue and probably gleaned from dubious sources – or peddlers of what has now been famously dubbed “fake news.” Source: Buzzfeed News

Don’t Believe Everything You Hear or Read Mars Peopled by One Vast Thinking Vegetable! Salt Lake Tribune, October 13, 1912 In the most recent “Right to the Source” column in NSTA’s magazine The Science Teacher, Michael Apfeldorf discusses reactions in the early 20th century to reports of life on Mars.