Recipes for 101 Simple Salads for the Season 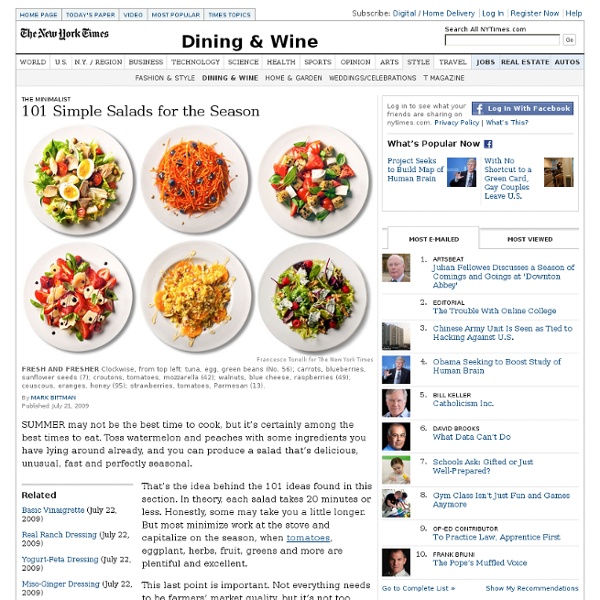 The Winter Guest: School of tapas: Sauteed watermelon with honey and mint Watermelon marinated in honey, vinegar and mint, then sauteed. This watermelon sauteed with honey and mint is a recipe for Michelin-starred French chef Michel Trama, quoted by Spanish chef Miguel López Castanier, chef at the Madrilenian Taberna de Liria in one of his books. Alright, I can't say it is strictly a Spanish tapa, and it's not traditional at all, but it perfectly fits the modern tapa concept. You could easily find it in any posh restaurant in any Malaga holidays, for example. And it is strikingly delicious and refreshing. This is a simple, refreshing and surprising way to eat a watermelon, worth trying. Ingredients Serves 4 1/2 peeled, sliced ​​watermelon1 heaping tablespoon of honey 2 tablespoons Spanish Sherry vinegar (or plain white wine vinegar)1 good bunch of mint leavesSalt to tasteOlive oil for sauteeing InstructionsArrange slices of watermelon on a large dish. The combination of flavors is amazing in this recipe.

potato salad A Life Journey » Blog Archive » How to Open & Clean out a Young Thai Coconut Hi Everyone, so my best friend in the whole world Gina told me she had no clue how to open a coconut… what?!!! I definately gotta change that! Its a lot easier than you might think, or easier than previous ways you’ve tried in the past. Cutting board, thick and preferably made out of wood Butchers Knife/Cleaver – Doesn’t have to be sharp Bowl or Cup (or 2*) Fruit scoop or spoon or ice cream scooper Young Thai Coconut (obviously!) First thing worth mentioning is when you buy a young thai coconut you want to make sure its good, but how do you do that? So now you’re pretty sure your coconut is a good coconut. Now take notice of where the three “veins” or lines on-top of the coconut are. If your knife stands up on its own, you went down far enough, if not try to lightly tap it into the coconut or if you’re feeling brave, try to hit the coconut in the same spot again. If you notice on my second coconut the meat was purple colored. Congratulations you just opened a coconut!!

101 Cookbooks - Healthy Recipe Journal Sweet potato & pear soup with sage My favorite thing about cooking is when things come out of nothing. After the holidays, we had an empty fridge, empty countertops… contents of a meal (or even a snack) nowhere in sight. I had a pear that was on the verge of way-too-ripe, half an onion… and then I noticed a sweet potato that I never remembered buying. I’ve seen recipes for butternut squash soup with pears, so I figured this would work just as well. The result was a rich & creamy warming meal. INGREDIENTS:Serves 3-4 (or up to 6 as a starter or side) adapted from Sassy Radish 1 tablespoon olive oil 1/2 medium onion, diced 1 large garlic clove, minced 1 teaspoon garam masala 1/2 teaspoon smoked paprika 1/4 teaspoon cayenne 1 large sweet potato (or enough to equal just shy of 1 pound) 1 ripe pear, peeled and chopped 3 cups water 1 teaspoon salt, plus more to taste 1/4 cup coconut milk (I used regular, light would also work) 4 sage leaves METHOD:Preheat oven to 400.

Recipe for CrockPot Rice with Dried Mushrooms, Herbs, and Parmesan Did you know you could put rice, seasonings, dried mushrooms, and stock into your slow cooker and a few hours later you'll have a delicious rice side dish without heating up the house or watching it at all? I'm thinking this is the perfect rice dish for a hot summer day when you're preparing for a party, or even for Sunday when you're gone to church but want dinner ready when you get home. This way of cooking rice was completely new to me, and I was so pleased with the results that I'm already imagining lots of other rice dishes made in the slow cooker. I always like to give credit for any recipe adapted from a cookbook, even when I've changed nearly everything in the recipe like I did this one. But the cookbook where I found this idea is out of stock on Amazon.com, the reviews there are mostly negative, and I've had the book for 15 years and this is the first thing I've made from it. The recipe called for 3 cups chicken stock and 3/4 cup white wine.