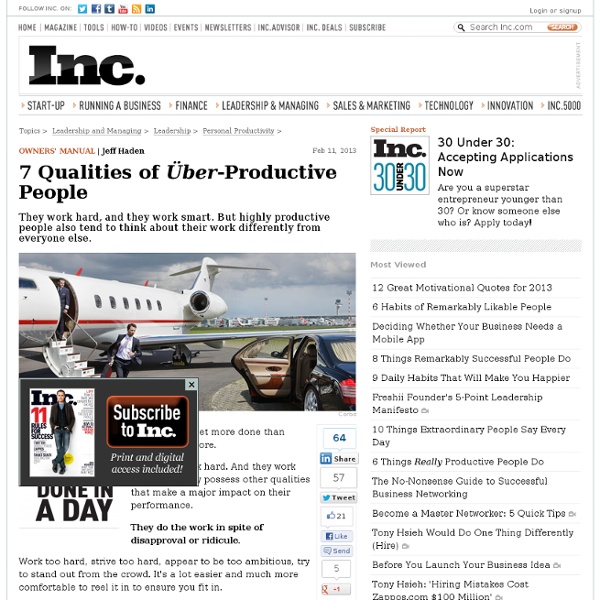 Some people get more done than others--a lot more. Sure, they work hard. And they work smart. But they possess other qualities that make a major impact on their performance. They do the work in spite of disapproval or ridicule. Work too hard, strive too hard, appear to be too ambitious, try to stand out from the crowd. Pleasing the (average-performing) crowd is something remarkably productive people don't worry about. They hear the criticism, they take the potshots, they endure the laughter or derision or even hostility--and they keep on measuring themselves and their efforts by their own standards. And, in the process, they achieve what they want to achieve. They see fear the same way other people view lunch. One of my clients is an outstanding--and outstandingly successful--comic. Yet he still has panic attacks before he walks onstage. He's still scared. Anyone hoping to achieve great things gets nervous. They can still do their best on their worst day. Most people wait for an idea.

MacGyver Favorites of 2012: On being wrong about business talks Business talks are boring. Among all the things I was certain of when I started writing for TED, that one was near the top of the list, just under ‘ice is cold’ and ‘brains are gooey.’ I worked as a physicist for a few years before switching over to writing (with a short jaunt in between in comedy), so just never cared much for business. My time as a scientist was spent doing research, talking to people about research, lecturing about research, annoying family members by going on and on about research and, very occasionally, sleeping. At TED, I was hired to write about the science talks, and it was wonderful. As I watched more talks, though, one theme started to emerge that I fell in love with — the idea of being wrong. I loved Rowe’s talk, partly because it’s a riveting story, but also because the feeling of being wrong –which he describes perfectly – is so central to science. And then, at TEDGlobal this year, I saw the talk at the top of this post, by Margaret Heffernan.

10 theories that explain why we dream Kinja is in read-only mode. We are working to restore service. I like #7 and #8 of sorts, as they sort of fit in with the kinds of dreams I have. Fixing things, solving thing, experimenting with situations, and learning. That said, I know that differs a lot from the kind of dreams I probably had as a child, so there really can't be a single answer to this I guess. On that note after seeing Inception I loved the comments about how our dreams are basically "filled in" with familiar places/things to make them feel more complete. Flagged

The #1 Career Mistake Capable People Make 69 Awesome Brain Hacks That Give You Mind-Blowing Powers #56. You Can Reset Your Sleep Cycle With a Hunger Strike Chances are, when summer vacation or the holidays come around and you're given time off work or school, your sleeping patterns falter a little bit ("a little bit" is a phrase that here means "you play video games until the 'a.m.' and 'p.m.' dot on your alarm clock has completely lost its meaning"). How? Simple! Don't forget to compensate for the hunger madness. You might know that the main way our body regulates its biological clock (and circadian rhythm) is through light. The food-clock desires this. Imagine you're a predator out hunting for food (and Jesse Ventura), but all the regular animals you would eat are nowhere to be found. The slaying of pizza rolls has set countless new biological mornings. It makes sense -- your brain is now under the impression that if you want to survive, you can only go hunting at night. #55. #54. You already know that the answer is yes. Let's say you're an eyewitness to a bank heist. #53. #52. #51.