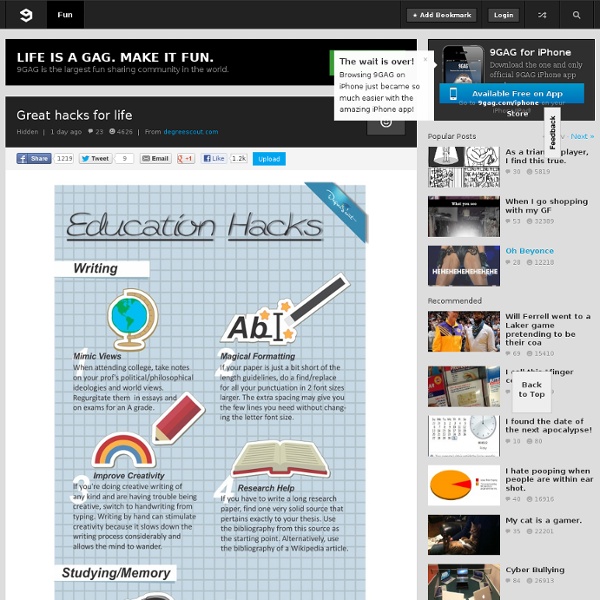 Body hacks. A Marines mistake. My dog is just learning romance. Babies are the worst roommates. If I didn't know about God and sin. Well played horse, well played. That's... genius. Useful Life Hacks « The Bored Ninja - Fun, Interesting, and Cool Stuff on the Internet My Collection of Funny Emails. Send funny emails to your friends! Reynolds Wrap has lock in taps to hold the roll in place The color on the bread tab indicates how fresh the bread is And those colors are in alphabetical order: b, g, r, w, y. You can divide and store ground meat in a zip loc bag. If you place a wooden spoon over a pot of boiling water, it won't boil over. Marshmallows can cure a soar throat. Stuffing a dryer sheet in your back pocket will repel mosquitoes. You can freeze cupcake batter for later use. You can paint upholstery You can make your own laundry soap. . You can dye plastic buttons. You can run a paper bag through your printer. You can print directly onto fabric. A dry erase marker can be used on most desk tops. You can mail anything that will take a stamp and weighs less than 13ounces without a box? If you break your blender jar you can replace it with a mason jar. Cereal canisters make the perfect trashcan for your car. Medicine cabinets are NOT the safest place for medicine

10 Psychology Tricks You Can Use To Influence People Before we get started, it’s important to note that none of these methods fall under what we would term the dark arts of influencing people. Anything that might be harmful to someone in any way, especially to their self esteem, is not included here. These are ways to win friends and influence people using psychology without being a jerk or making someone feel bad. Trick: Get someone to do a favor for you—also known as the Benjamin Franklin effect. Legend has it that Benjamin Franklin once wanted to win over a man who didn’t like him. Scientists decided to test this theory and found that those who were asked by the researcher for a personal favor rated the researcher much more favorably than the other groups did. Trick: Ask for way more than you want at first then scale it back later. This trick is sometimes known as the door in the face approach. Trick: Use a person’s name, or their title depending on the situation. Trick: Flattery will actually get you everywhere. Offer They Can’t Refuse

The Quick & Easy Checkmates in Chess - Just Chess Chess is a wonderful game. Played well, it is a game of daring and strategy that will leave spectators breathless in anticipation of your next move. Played badly, some will have to struggle to keep a wince from their face as you miss move after move, until the game is lost. This is a tutorial for two of the simplest ways to end a game. Either colour can use these tactics. The Four-Move Checkmate The first move is the most critical in the game. For white, the first move is the King’s pawn. The second and third moves are interchangeable, yet no less important. Before moving your fourth turn, take a second to check the board over. The Five-Move Checkmate The Five-move Checkmate is more difficult to use than it’s four move brother, because of the extra combinations involved with an extra move allowed. A defense of both types of checkmate can be to move the King’s Bishop’s pawn up one square.