The Art of Non-Conformity 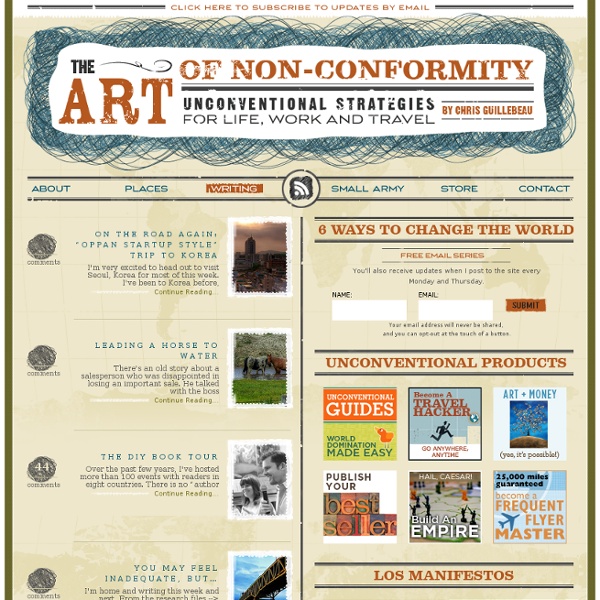 Challenging Authority Since 1978 I am a writer, traveler, and entrepreneur with the goal of visiting every country in the world while connecting with other world-changers. Continue reading about Chris Mission Accomplished!

How to Be Awesome The other day I was talking with my friend Phil, a doctoral student in philosophy. Phil is much smarter than me – of that there is no doubt – but he’s struggling with the process of working through a draining series of requirements to receive his terminal degree. A Ph.D. in a field like philosophy usually requires at least 5 years of study beyond the 4-year bachelor’s degree.

The Peoples Voice Greg Hunter· Economist Dr. Paul Craig Roberts says, "The physical stock of gold in the West to meet delivery demand is diminishing rapidly. So, one day the Chinese will buy 100 tons of gold, and we won't be able to make delivery. That would crash the system. It would just pop. Lemon Cleanse LEMON DRINK for your Master Cleanseyou need:* 2 tablespoons FRESH squeezed lemon or lime juice (approx. 1/2 lemon)* 2 tablespoons genuine organic maple syrup, Grade B (the darker the better)** 1/10 teaspoon (a small pinch!) cayenne pepper, gradually increase (the more BTUs the better)* 300 - 500 ccm (10-14 oz) pure waterIn a 300ccm (10-ounce) glass (to allow for 227ccm and mixing room): 2 tablespoons fresh (and organic, if possible) lemon or lime juice (absolutely no canned or frozen juice). 2 tablespoons real (and organic, if possible) grade B or C maple syrup. (Don't use Grade A maple syrup or maple-flavored syrup. They are over-refined, which means that they are mostly refined sugars and lack essential minerals.) A small pinch of cayenne pepper (to taste). Spring or purified water, between room temperature and medium hot (but not cold) – fill to 1/4 liter (8 oz).

CS170: EFFICIENT ALGORITHMS & INTRACTABLE PROBLEMS, FALL 2006 The textbook for this course is "Algorithms" by Dasgupta, Papadimitriou & Vazirani. It will not be available at bookstores until about September 15. In the meantime, you can access the material online at Algorithms The grades for the course have been uploaded on bearfacts. The scores for the final are available here. Have a good break!

Personal Memex The Vision Over the last few years, I’ve been interested in the fields of Personal Knowledge Management (or PKM) and Personal Learning Environments (or PLE). I’ve been a knowledge worker as long as I can remember, and have subsequently searched long and hard for numerous software applications and systems to help me better process, organize, and retrieve information. I’ve tried many different free and commercial solutions (outliners, PIMs, personal knowledge bases, mind mapping software, notebooks/pad, etc.), but none of then were 100% complete in my mind. Then, In 2006 I came across Vannevar Bush, and learned about his amazing vision for the Memex (or “memory extender”). The memex is the name given by Vannevar Bush to the theoretical proto-hypertext computer system he proposed in his 1945 The Atlantic Monthly article As We May Think.

Alternative media (U.S. political left) List of alternative media (U.S. political left) From Wikipedia, the free encyclopedia This is a list of alternative media espousing the views of the American political left. Uncollege In the digital age that we all live in, you are essentially illiterate if you can’t code. Whether you are an entrepreneur who wants to create an MVP, an aspiring developer, or a human being who uses a computer, one thing is clear—coding is an invaluable skill. It’s a skill that’s also tangibly valuable in the marketplace: the demand for developers is obscene. While every other sector is flooded with overqualified applicants, there is a war for technical talent. This is good news for hackademics. If you can write beautiful code, formal credentials become a mere triviality.

Seven Speaking Tips That Beat "Pretend Your Audience Is Naked& Aggh. Everyone showed up clothed! Once upon a time, I suffered from glossophobia. This affliction touches billions. It's the fear of public speaking , even to a tiny group. I conquered it by discovering what makes people smile, nod, and listen carefully, because nothing calms you down faster than an interested audience.

10 Differences Between Successful and Unsuccessful People Everyone strives to be successful, but it doesn’t always come easily. The people who do end up reaching their highest potential always possess certain qualities and habits that allowed them to get there which separate them from those who don’t. Here are 10 differences between successful and unsuccessful people! 1. Embrace change vs. Alternative media Because the term "alternative" has connotations of self-marginalization, some media outlets now prefer the term "independent" over "alternative". Several different categories of media may fall under the heading of alternative media. These include, but are not limited to, radical media, dissident and social movement media, ethnic/racial media, indigenous media, community media, subcultural media, student media, and avant-garde media. Each of these categories highlights the perceived shortcomings of dominant media to serve particular audiences, aims and interests, and attempts to overcome these shortcomings through their own media.

Public speaking:  an exercise and illustration Know the room.Be familiar with the place in which you will speak. Arrive early, walk around the speaking area and practice using the microphone and any visual aids. Know the audience.Greet some of the audience as they arrive. It's easier to speak to a group of friends than to a group of strangers. Know your material.Practice your speech and revise it if necessary.If you're not familiar with your material or are uncomfortable with it, your nervousness will increase.