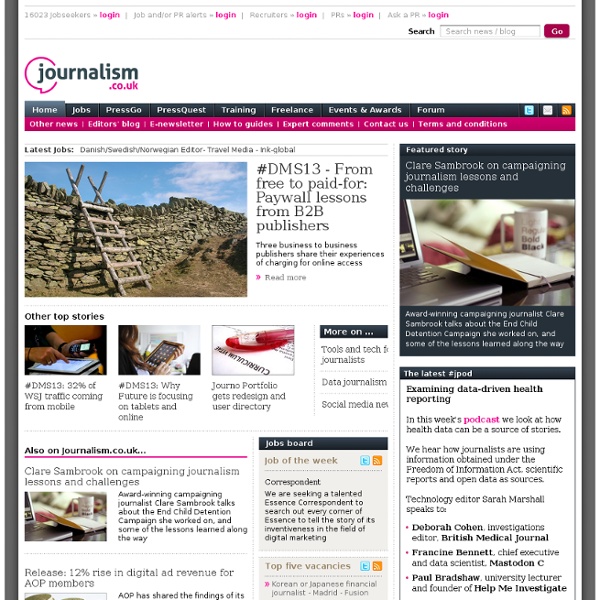 How Social Media is Radically Changing the Newsroom Leah Betancourt is the digital community manager at the Star Tribune in Minneapolis, Minn. She is @l3ahb3tan on Twitter. Did Biz Stone, Evan Williams, Jack Dorsey or even Mark Zuckerberg ever portend that their means of connecting among social circles would be the news du jour in many newsrooms across the country? Social networking sites are some of the newest tools for reporters to use in news gathering, networking and promoting their work. But many newsrooms are fuzzy on the usage. "It’s very much the issue of the day. Stuff that occurs to me: Where London science communicators might work by @JoBrodie, brodiesnotes.blogspot.com Updated 28 December 2013 - sections marked in orange have been checked, others haven't. Shortened link for this post is How you can help... 1.

REFLECTIONS OF A NEWSOSAUR: What’s next for newspapers? Not so very long ago, the newspaper business was a snap: Build the largest possible audience, sell the most possible ads, charge the highest possible rates, print the fattest possible papers and pump out the biggest possible profits. This enviable model worked exquisitely for generations, because publishers had little, if any competition. But it is now clear, as attested by the 50% drop in newspaper advertising since 2005, that the old ways can no longer succeed. So, most publishers – after arguably procrastinating far too long – are faced with choosing the best possible going-forward strategy for their mature, if not to say declining, businesses. They will be in good company. In the last few weeks, Warren Buffett, the Newhouse family and Rupert Murdoch each embarked on one of the three most likely paths available to newspaper publishers.

Shortlist Data visualisation of the year Shortlisted projects Humanizing data on the Syrian conflict, Bayanat Box, Lebanon Is anything left of Mosul?, BBC News Visual Journalism team, United Kingdom Feeding China, Bloomberg, Hong Kong HOW TO: Launch Your Own Indie Journalism Site Maria Schneider left mainstream publishing behind last year to start Editor Unleashed, a site covering writing, publishing and social media. Share tips and advice for startup journalists here. Downsizing, layoffs, newspaper and magazine closings have put journalism on the most endangered careers list. But hundreds of smart journalists are realizing the opportunity and using their connections, reporting savvy and deep knowledge of their subjects to start sites covering their familiar beats. These bootstrapping indie journalists are learning to run their own small business, including tending to many details they never had to worry about before—ad sales, marketing, promotion, tech and design to name a few.

Journalism Graduate Schemes: The Complete List The only complete and updated list of media and journalism graduate schemes or traineeships in the UK. We aim to update this list every two weeks – but do get in touch if you spot something which isn’t quite right. You can also sign up for our newsletter to get free monthly reminders of when graduate schemes are closing and any paid freelance opportunities. List Last Updated 15 March 2017 March The Spectator Summer Internship Scheme – Closes March 17Paid summer internship scheme – but no CVs accepted! Video: The Most Quoted Man in News With no special skill or expertise, Greg Packer has been quoted by media outlets nearly a thousand times. Since his name first appeared on newsprint, in 1995, he’s spoken to reporters on subjects ranging from the war in Iraq to the release of the first iPhone. Greg’s campaign to be the most quoted man in news has been so successful that the Associated Press sent its staff a memo that essentially banned interviews with him.

Top 5 Online Resources for the Citizen Journalist Over the next few years, those early experiences as well as the investigations that followed led me to accumulate a personal library of valued online resources for journalists. These are resources that are now extremely valuable to me. They represent the core of my online research, and they are the places I immediately turn to first when it’s time to conduct another deep investigation for another news article. As the Internet expands, the community of citizen journalists continues to grow. Along with that growth comes a sort of collaborative network where you can excel in your research more from networking than you can from competing.