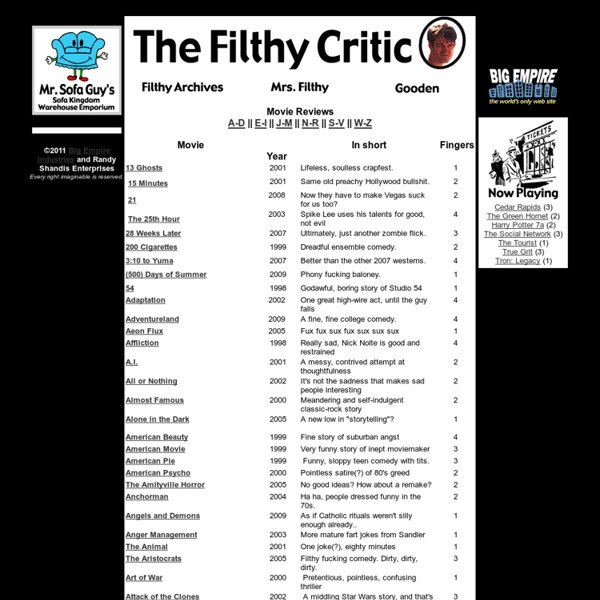 Shadowess Shadowess This is a little game I am making just for fun. I’ve no real plan – other than adding cool stuff. You can follow the development of Shadowess 2 . Use ARROWS to move. Sound Credits I found all sounds on freesound.org , here is a full list of credits: Teaser I made a teaser for fun. Type of Roomate you will get in College « GraphJam: Music and Po (404 error) Yikes! This page doesn't exist. Please choose something else from the Cheezburger menu Make a Meme Use one of our LOLBuilders. Make a Site Cheezburger Sites, the fastest site you'll ever make. Pick Your Site Name Tell me more Keyboard Navigation Use your keyboard to navigate the site!

The Many Costumes of Bill Murray’s Film Career Niege Borges decided to create a thank you card for Bill Murray but the Brazilian artist is not very good with words so he decided to make a paper doll with costumes of Murray’s filmography. The result is some of the most impressive Bill Murray fan art to date. [source] From The Web Leave a comment comments Tags: Bill Murray, Bill Murray fan art, Bill Murray with socks, billy murray 25 Imaginative Illustrations Inspired By Film Posted by Andrew Lindstrom / Lists / April 16th, 2009 For the most part, being both a film geek and design geek are two completely separate interests of mine that rarely coexist. Occasionally I’ll be enticed by a great poster design, or appreciate the font choice in a title sequence – but usually the two worlds never collide. However, lately I’ve noticed a trend of artists and designers paying homage to their favorite films in their own creative way. It is in admiration of this movement that I’ve hand picked my favorite 25 Imaginative Illustrations Inspired By Film. Network – Source Annie Hall – Source The Shining – Source Indiana Jones and the Last Crusade – Source The Dark Knight – Source Groundhog Day – Source Big – Source American Psycho – Source M – Source Rain Man – Source Office Space – Source The Philosopher’s Stone – Source Highlander – Source Bill and Ted’s Excellent Adventure – Source The Great Dictator – Source Pulp Fiction – Source Ghost Busters – Source Synecdoche, NY – Source Similar Posts

20 Animal Pictures Guaranteed To Make You LOL September 23, 2011 | 18 Comments » | Topics: LOL, Pictures 11 Points - 11 Predictions That Back to the Future Part II Got R So, since it's 2009 and we're only six-and-a-half years away from the future they traveled to (October 2015)... I think we're close enough to do an audit. How'd they do? How accurate were their predictions? In my too-much-time-on-my-hands research of the subject, I ended up finding 11 good predictions from "Back to the Future Part II"... and 11 bad predictions. Watching multiple TV channels simultaneously. Here's Marty video conferencing with his co-worker Needles.

19 Movie Body Modifications: Bulked Up, Pigged Out and Skeletal There are few actors that are willing to undergo a massive body transformation for movie roles. There are even fewer, because of the difficulty, that do it more than once. Typically referred to as ‘method actors’ for their dedication to their craft and their roles, these Hollywood icons were willing to shed or gain significant weight, or take up rigorous weight-lifting regimens. The following are some of the most noteworthy body transformations by movie stars. George Clooney – Syriana (Source 1, 2) George Clooney packed on about 30lbs for his role of a veteran CIA operative in the politcal-suspense thriller, Syriana. Jake Gyllenhaal – Jarhead (Source 1, 2) The regularly slim (Donnie Darko, Brokeback Mountain) Gyllenhaal put on about 25lbs of pure muscle for his role as Anthony “Swoff” Swofford in the 2005 film about the first Gulf War. Ryan Reynolds – Blade Trilogy (Source 1, 2) Hillary Swank – Million Dollar Baby (Source 1, 2) Swank is no stranger to changing her appearance for a movie role.

16 Unique and Impressive On-Screen Transformations Many movies require actors and actresses to wear costumes or to apply basic makeup to take on a specific role. Some directors may even require an actors and actresses to change their hair color or lose weight. Few movies, however, require its stars to undergo massive transformations for their roles-a select few of which are unique to the point that they create a memorable experience in and of themselves. From prosthetic body parts to changing one’s race, gender or species, these are the most unique transformations that actors have undergone for their on-screen performances. Brad Pitt – The Curious Case of Benjamin Button (Source 1, 2) In the film adaptation of F Scott Fitzgerald’s famous children’s book , Pitt plays a character that ages backwards. Heath Ledger – Batman: The Dark Knight (Source 1, 2) Heralded as Ledger’s career defining performance, his portrayal of The Joker was quite different than that of his precursor, Jack Nicholson. Charlize Theron – Monster (Source 1, 2) (Source 1, 2)

Bon Iver (Part I) - Bon Iver (Part I) - LA BLOGOTHEQUE We first suggested this idea just like we used to, hoping it would work because we so loved the artist. We just suggested that Bon Iver could play a private show, a Pocket Party in an apartment. We didn’t really know if we could trust that it would ever happen until one moment in May, when Nora and I met Justin for an interview in a small backyard. At the end of it, we mentioned what was on our minds. He immediately responded that this is kinda what he dreams of: that his album is meant to be played in front of small crowds, and that he was looking forward to it. We, too, were looking forward to it, and God knows how hard it all was. We emptied the living room for the Pocket Party, and then spent an hour or so wandering with Bon Iver. What you can see in these first videos, and what we understood that evening, is how thoroughly Bon Iver is now a band. Flash back, however, to earlier in the day as they worked out their set. Translated by Nora