How to Draw the Head from Any Angle 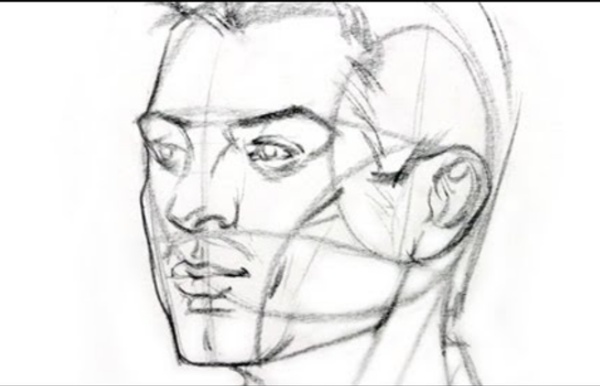 How to Draw the Head in 3/4 or Side View A common approach to drawing the head from 3/4 or side view is to use a 2 step construction approach. The first step is to draw a ball for the cranium, followed by drawing the frontal plane and jaw. Below is an example by Andrew Loomis (Fig. 1). This tutorial will introduce a more fluid and gestural approach to drawing the head. The focus is on the major gestures, or “thrusts” as Steve Huston refers to them, and their relationships to one another. Freehand Drawing and Composition Page 08 / 09 Free Book for Learning Art, For Beginners Drawings may be arranged in the following classes : 1. Drawings representing the appearance of a single object whose position is of no consequence. 2.

Without the 2020 Games, Olympian Gwen Berry is considering unemployment She is thinking about filing for unemployment, or seeing if she can get a day job, like the one she once held at Dick's Sporting Goods, to help stem the financial tide left behind by the coronavirus. "When people think of Olympians, they think of people who have a lot of money, like professional basketball players, or professional baseball players, and it's definitely not the case," Berry told CNN Sport. "The Olympics are considered amateur. We do not get paid for training or participating. The Olympic Games makes billions of dollars, and the athletes literally get paid nothing. I don't think a lot of people understand that, because they don't know Olympians.

Bernie Ecclestone, former F1 mogul, to be a father again at 89 Ecclestone's fourth child will be born this summer, the former Formula One chief told the UK's PA Media news agency Friday. The new arrival will be the billionaire's first son, and his first child with Flosi, joining daughters Tamara, Petra and Deborah from Ecclestone's previous marriages. "Tamara is absolutely thrilled for them both," a spokesperson for Ecclestone's second daughter told CNN. Ecclestone will turn 90 in October but says his age isn't an issue. "I don't see there's any difference between being 89 and 29," Ecclestone told PA. "You've got the same problems I suppose.

The people creating art to remember George Floyd - CNN Style Written by Ananda Pellerin, CNN This feature includes artwork with language that some might find offensive. In the wake of George Floyd's death at the hands of a Minneapolis police officer, artists have been quick to respond with works that seek to memorialize, to provoke and to heal. Los Angeles-based artist and activist Nikkolas Smith is using his work to convey the message that police violence is a reality for many African Americans. "This latest case of police brutality was yet another injustice that moved me to paint a tribute to give honor and a voice to a voiceless victim," said the 35-year-old over email. A portrait of George Floyd by Nikkolas Smith Credit: Nikkolas Smith

Self Portrail Stencil I am soooo excited about this one. Please do try it, especially you journal artists. It is a lot more fun than you'd think to manipulate images of yourself. Although I make stencils a lot, it had never occurred to me to do a self-portrait until I read Randi Feuerhelm-Watts' brilliant book, Wide Open. If you don't have her book, go get it today. So many inspiring ideas! How to Draw Hair, Part 1 Looking back at my tutorials on drawing the head, I realized that I covered individual features, but completely left out hair. This tutorial will is split into 3 parts: The Basics, Types of Hair, and a Step by Step drawing. I’ll start this first part of the series with common mistakes that I see all the time. Common Mistakes when Drawing Hair Forgetting about the volumes

Human Figure Drawing Proportions START WITH A (3 x 4) OVAL. Divide this head like this:The top of the skull.The pupils are in the middle of the head, top to bottom.The bottom of the nose is about 1.5 eye widths from the eye line.1 eye width below the nose is between the lips.1/3 below between the lips and the chin is the chin crease.I started with an oval that fit on my skull's front view. My horizontal center line of the skull dividing the top to bottom is between the pupils. How to Draw Eyes For a video version of this tutorial visit www.proko.com/how-to-draw-eyes-structure This tutorial is a continuation of How to Draw the Head from Any Angle. I will go over the structure of the eye and detailed information on drawing the brow ridge, eyeball, eyelids, eyelashes, iris, cornea, and pupil. The Basic Forms

Eyes and Freckles The color pencil drawings of Amy Robins. Artwork © Amy Robins Link via Life is a Danceable Tragedy How to Draw the Head From Any Angle The Basic Forms To draw the head from any angle you must first understand its basic structure. Look past all the distracting details and visualize the underlying forms. This ability to simplify can be applied to the features of the face, but when starting the drawing you could look even further.

How to Draw Lips For a video version of this tutorial visit www.proko.com/how-to-draw-lips-anatomy-and-structure This tutorial is a continuation of How to Draw the Head from Any Angle. I will cover the basic forms of the mouth, some anatomical information, and the key information about the minor planes. Drawing Hair in Pencil By Maery Drawing hair is hard work. It's complicated, time consuming, and often the results are terrible, and trust me, I speak from personal experience when I say that. So, why bother?