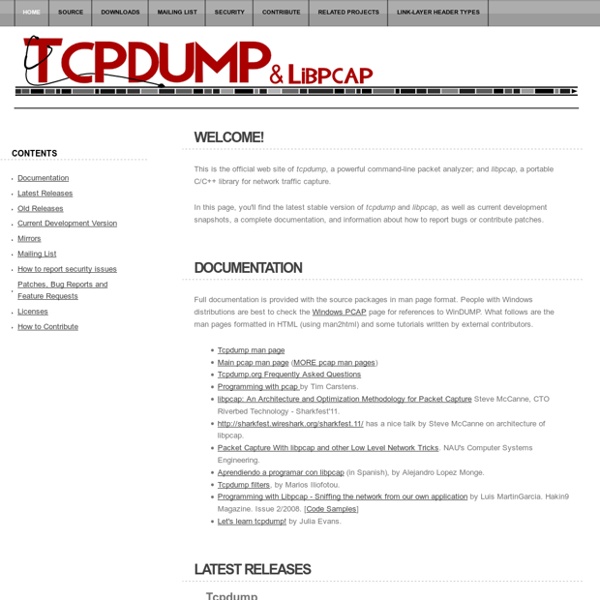 SampleCaptures Sample Captures So you're at home tonight, having just installed Wireshark. You want to take the program for a test drive. But your home LAN doesn't have any interesting or exotic packets on it? Here's some goodies to try. Please note that if for some reason your version of Wireshark doesn't have zlib support, you'll have to gunzip any file with a .gz extension. John the Ripper password cracker John the Ripper is free and Open Source software, distributed primarily in source code form. If you would rather use a commercial product tailored for your specific operating system, please consider John the Ripper Pro, which is distributed primarily in the form of "native" packages for the target operating systems and in general is meant to be easier to install and use while delivering optimal performance. This version integrates lots of contributed patches adding GPU support (OpenCL and CUDA), support for a hundred of additional hash and cipher types (including popular ones such as NTLM, raw MD5, etc., and even things such as encrypted OpenSSH private keys, ZIP and RAR archives, PDF files, etc.), as well as some optimizations and features. Unfortunately, its overall quality is lower than the official version's. Requires OpenSSL.

Network Monitor Experts are tools that can be run directly from the Network Monitor Application. They provide external analysis of live or previously captured network traffic. These experts can help troubleshoot specific problems or provide more information to help you narrow down an issue. The following site has a list of the currently available experts and is where you are directed when you select "Download Experts" from the Expert Menu in the Network Monitor application. There you'll also find an SDK which contains a sample and further documentation to help you create your own experts.

Packet Captures Showing 1 - 25 of 166 nf9-juniper-vmx.pcapng.cap 912 bytes Submitted Dec 10, 2016 by Jb93 Juniper vMX NetFlow. arp_pcap.pcapng.cap 2.2 KB Submitted Mar 11, 2016 by Ashay PCAP files from the US National CyberWatch Mid-Atlantic Collegiate Cyber Defense Competition (MACCDC) The U.S. National CyberWatch Mid-Atlantic Collegiate Cyber Defense Competition (MACCDC) is a unique experience for college and university students to test their cybersecurity knowledge and skills in a competitive environment. The MACCDC takes great pride in being one of the premier events of this type in the United States. While similar to other cyber defense competitions in many aspects, the MA CCDC, as part of the National CCDC, is unique in that it focuses on the operational aspects of managing and protecting an existing network infrastructure.

3 way handshake, TCP Three-way handshake, TCP Synchronization In this lesson, you will learn how two TCP devices synchronize using three way handshake (3 way handshake) and what are the three steps of a TCP three way handshake and how two TCP devices synchronize. Before the sending device and the receiving device start the exchange of data, both devices need to be synchronized. During the TCP initialization process, the sending device and the receiving device exchange a few control packets for synchronization purposes. This exchange is known as a three-way handshake. Top 10 Wireshark Filters (by Chris Greer) Author Profile - Chris Greer is a Network Analyst for Packet Pioneer. Chris has many years of experience in analyzing and troubleshooting networks. He regularly assists companies in tracking down the source of network and application performance problems using a variety of protocol analysis and monitoring tools including Wireshark. When he isn’t hunting down problems at the packet level, he can be found teaching various analysis workshops at Interop and other industry trade shows. Chris also delivers training and develops technical content for several analysis vendors.

DNS for Rocket Scientists - Contents This Open Source Guide is about DNS and (mostly) BIND 9.x on Linux (Fedora Core), BSD's (FreeBSD, OpenBSD and NetBSD) and Windows (Windows 7 and 10). It is meant for newbies, Rocket Scientist wannabees and anyone in between. This Guide was born out of our first attempts a number of years ago at trying to install a much needed DNS service on an early Redhat Linux system. We completed the DNS 'rite of passage' and found it a pretty unedifying and pointless experience. Health Warning: This is still a work-in-progress. If you find errors don't grumble - tell us.

TCP Tune System Specific Notes for System Administrators (and Privileged Users) These notes are intended to help users and system administrators maximize TCP/IP performance on their computer systems. They summarize all of the end-system (computer system) network tuning issues including a tutorial on TCP tuning, easy configuration checks for non-experts, and a repository of operating system specific instructions for getting the best possible network performance on these platforms This material is currently under active revision. 50+ Open Source Performance Testing Tools Performance testing is a general term used to describe testing activities where a simulated user load is directed at a system and measurements are gathered. It is designed to meet or exceed a set of system performance goals while maintaining a particular user load profile. It places variable load – from a minimum to a maximum – on the system.