How to Draw Eyes 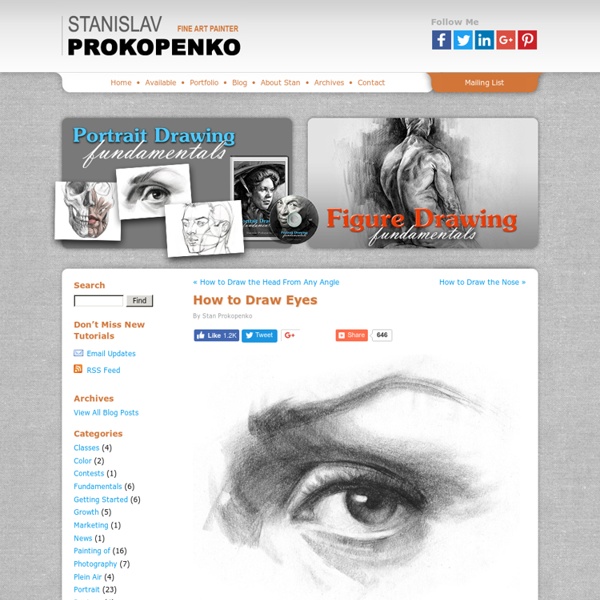 Eyes and Freckles The color pencil drawings of Amy Robins. Artwork © Amy Robins Link via Life is a Danceable Tragedy Drawing Charicature Hands This short tutorial is a just a small taste of a larger and much more in-depth book I wrote called The Mad Art of Caricature! The book is 175 full-color pages, lavishly illustrated and contains greatly expanded explanations of the concepts presented in this tutorials, as well and a great deal of additional material on caricaturing other facial features, posture, hands, expression and more, techniques on drawing from live models, doing caricature for freelance illustration and for MAD Magazine. This is a must have book for anyone interested in caricature, cartooning or humorous illustration. You can order it online here. How to Draw Hands Easily the most asked question I get is “how do you draw caricatures?”. Next to faces, hands are probably the most expressive and intricate part of the human form. I’m a cartoonist at heart, so the hands I draw are not realistic hands by most definitions. Breaking Down Hand Structure Not really much to it, is there? Relationships of Hand Structure

How to Draw Lips For a video version of this tutorial visit www.proko.com/how-to-draw-lips-anatomy-and-structure This tutorial is a continuation of How to Draw the Head from Any Angle. I will cover the basic forms of the mouth, some anatomical information, and the key information about the minor planes. At the end, I will show a step by step drawing of the lips. Basic Forms One of the most overlooked ideas of the mouth is the cylindrical tooth cylinder underneath. You can see here how this inflated cylinder affects the surface forms of the lips: Major Planes Anatomical Information I won’t go into too much detail about all the muscles of the lips and their functions because that’s not the intention of this tutorial. is a great resource for anatomy. The red portion of the lips and the part directly above and below is called the orbicularis oris. Minor Planes The Red Portion of the Lips The top lip has three forms and the bottom lip has two. The forms of the lower lip are usually fuller then the upper lip. 5.

Stanislav Prokopenko - Russian Fine Art Painter Art | Sharpie Markers Official Blog It’s that time of year again! Sharpie is excited to announce the bright new faces appearing in its 2012 advertising campaign! You may remember last year’s “Start With Sharpie” ads that featured some of our most passionate fans. We were so inspired by what fans just like YOU are creating with Sharpie that we HAD to showcase a new round of amazing talent in 2012! Allow me to introduce you to Sharpie’s newest rising star, and one of the stars for our 2012 ad campaign, Emmy Star Brown! Our very own gold star, Emmy Star Brown, Sharpie 2012 Advocate! Emmy is a Chicago graphic designer and artist who got her start by creating eco-friendly, freehand expressive artwork on salvaged glassware and glass windows. Tell me about yourself! I grew up right outside of Chicago, in the suburb of Glen Ellyn. As a kid, both of my parents were teachers. Likes: Design-wise, I have always loved mobiles, typography, modern/minimalist work. I’m also a huge dog lover. What inspires you to uncap what’s inside? Yes!

Human Figure Drawing Proportions START WITH A (3 x 4) OVAL. Divide this head like this:The top of the skull.The pupils are in the middle of the head, top to bottom.The bottom of the nose is about 1.5 eye widths from the eye line.1 eye width below the nose is between the lips.1/3 below between the lips and the chin is the chin crease.I started with an oval that fit on my skull's front view. My horizontal center line of the skull dividing the top to bottom is between the pupils. My head is 5 eyes wide not including my ears. When drawing the head I consider the horizontal eye line the center of the head. The head sideways is one head-length high and one head-length wide. The ear hole is in line with bottom of the nose, and the backbone/skull pivot point. The bottom of the ear varies with the individual and age. The face triangle is from the center of each pupil, through the nostrils of the nose to a point between the top front teeth. This charcoal self-portrait drawing is on a white background. 1. That's it.

Drawing the Nose Update 09-26-2012 – Above is a video version of this tutorial. For more video tutorials visit Proko.com and subscribe to the newsletter In this tutorial I will go over the structure of the nose and give detailed information about the bridge, ball, and nostrils of the nose. At the end, I will show a step by step of a nose drawing. The Major Planes When drawing the nose, I’ll usually start by indicating the 4 major planes – top, 2 sides, and bottom. Anatomical Information I think the anatomical shapes in the nose are really interesting. The Minor Planes It’s important to memorize the subtle plane changes in all the different part of the nose. Minor Planes of the Bridge The Glabella is shaped like a keystone. Minor Planes of the Ball The ball of the nose isn’t perfectly round, but has very distinct plane changes. Minor planes of the Nostrils The nostrils, also called wings, curl under themselves similar to the septum. Drawing the Nose 4. Made a video version of this tutorial.

50 Clever Tutorials and Techniques on Traditional Drawing - Smashing Magazine Advertisement Traditional drawing is certainly way harder than digital and it is true that people are able to progress much faster digitally, but one should learn the traditional type of drawing and painting before starting digital drawing, since it often lays out the foundation for screen design. This article contains a mixture of traditional drawing tutorials, drawing techniques and some methods for transforming and preparing your creations for screen design. Traditional Drawing Tutorials Marilyn Portrait TutorialA truly fantastic drawing tutorial to learn how to draw a portrait of Marilyn Monroe with pencil. Portrait tutorialThis is a step by step tutorial on how to draw a realistic portrait. How to draw lipsIn this tutorial artist will explain how to draw the structure of the human lips. How to Draw a CarFor this tutorial the artist will show the different steps he takes in drawing a realistic looking car. Evil skull drawingLooking for a terrifying evil skull drawing tutorial?