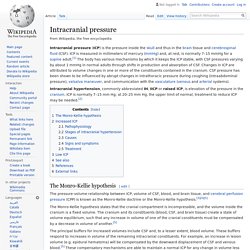 ICP is measured in millimeters of mercury (mmHg) and, at rest, is normally 7–15 mmHg for a supine adult.[1] The body has various mechanisms by which it keeps the ICP stable, with CSF pressures varying by about 1 mmHg in normal adults through shifts in production and absorption of CSF. Changes in ICP are attributed to volume changes in one or more of the constituents contained in the cranium. CSF pressure has been shown to be influenced by abrupt changes in intrathoracic pressure during coughing (intraabdominal pressure), valsalva maneuver, and communication with the vasculature (venous and arterial systems). Epidural hematoma - Wikipedia.

Epidural or extradural hematoma (haematoma), also known as an epidural hemorrhage, is a type of traumatic brain injury (TBI) in which a buildup of blood occurs between the dura mater (the tough outer membrane of the central nervous system) and the skull.[1] The spinal cord is also covered by a layer of dura mater, so epidural bleeds may also occur in the spinal column. 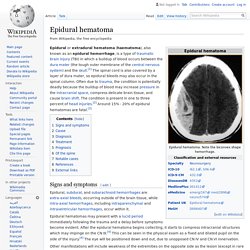 Often due to trauma, the condition is potentially deadly because the buildup of blood may increase pressure in the intracranial space, compress delicate brain tissue, and cause brain shift. The condition is present in one to three percent of head injuries.[2] Around 15% - 20% of epidural hematomas are fatal.[3] Signs and symptoms[edit] Epidural, subdural, and subarachnoid hemorrhages are extra-axial bleeds, occurring outside of the brain tissue, while intra-axial hemorrhages, including intraparenchymal and intraventricular hemorrhages, occur within it.

Cause[edit] Radiology Reference Article. Extradural haematoma (EDH), also known as an epidural haematoma, is a collection of blood that forms between the inner surface of the skull and outer layer of the dura, which is called the periosteal layer. 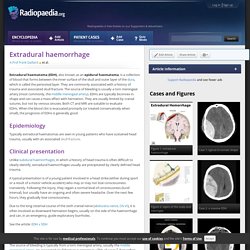 They are commonly associated with a history of trauma and associated skull fracture. The source of bleeding is usually a torn meningeal artery (most commonly, the middle meningeal artery). EDHs are typically biconvex in shape and can cause a mass effect with herniation. They are usually limited by cranial sutures, but not by venous sinuses. Both CT and MRI are suitable to evaluate EDHs. Typically extradural haematomas are seen in young patients who have sustained head trauma, usually with an associated skull fracture. Unlike subdural haemorrhages, in which a history of head trauma is often difficult to clearly identify, extradural haemorrhages usually are precipitated by clearly defined head trauma. 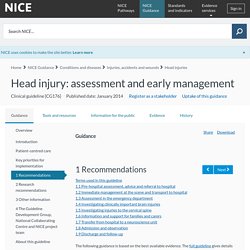 The full guideline gives details of the methods and the evidence used to develop the guidance. Within this guideline children are defined as patients aged under 16 years and infants as those aged under 1 year at the time of presentation to hospital with head injury. Terms used in this guideline Focal neurological deficit Problems restricted to a particular part of the body or a particular activity, for example, difficulties with understanding, speaking, reading or writing; decreased sensation; loss of balance; general weakness; visual changes; abnormal reflexes; and problems walking. High-energy head injury Base of open or depressed skull fracture or penetrating head injury 1.1 Pre-hospital assessment, advice and referral to hospital Telephone advice services Any loss of consciousness ('knocked out') as a result of the injury, from which the person has now recovered. Community health services and NHS minor injury clinics. CPP. ICP. Secondary Brain Injury. Battle's sign - Wikipedia.

In medical terminology, Battle's sign, also mastoid ecchymosis, is an indication of fracture of posterior cranial fossa of the skull, and may suggest underlying brain trauma. 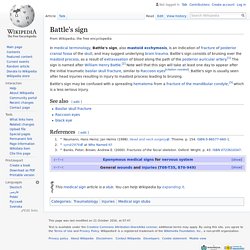 Battle's sign consists of bruising over the mastoid process, as a result of extravasation of blood along the path of the posterior auricular artery.[1] The sign is named after William Henry Battle.[2] Note well that this sign will take at least one day to appear after the initial traumatic basilar skull fracture, similar to Raccoon eyes[citation needed]. Battle's sign is usually seen after head injuries resulting in injury to mastoid process leading to bruising. 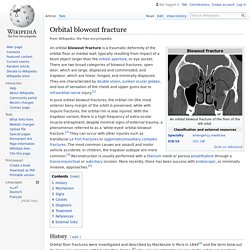 With the trapdoor variant, there is a high frequency of extra-ocular muscle entrapment, despite minimal signs of external trauma, a phenomenon referred to as a 'white-eyed' orbital blowout fracture.[2] They can occur with other injuries such as transfacial Le Fort fractures or zygomaticomaxillary complex fractures. The most common causes are assault and motor vehicle accidents. In children, the trapdoor subtype are more common.[3] Reconstruction is usually performed with a titanium mesh or porous polyethylene through a transconjunctival or subciliary incision. More recently, there has been success with endoscopic, or minimally invasive, approaches.[4] History[edit] Mechanism[edit] Signs[edit] Some clinically observed signs include: Causes[edit] Common medical causes of blowout fracture may include: Subdural.