How to Paint a Realistic Eye [Coloring Tutorial] 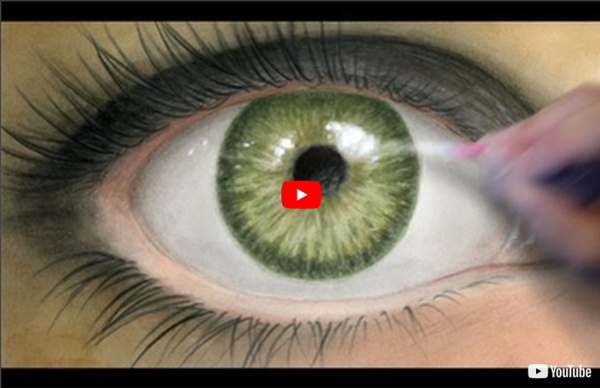 How to Draw the Head in 3/4 or Side View A common approach to drawing the head from 3/4 or side view is to use a 2 step construction approach. The first step is to draw a ball for the cranium, followed by drawing the frontal plane and jaw. Below is an example by Andrew Loomis (Fig. 1). This tutorial will introduce a more fluid and gestural approach to drawing the head. Cross-hatching Modeling is a term that drawing borrows from sculpture to signify any graphic strategy that develops the appearance of the third dimension. Varying line width and weight, exploring tonal contrasts, cast shadows, linear cross-sections, and atmospheric perspective are some of the ways that the draughtsman responds to the visual phenomena of the three-dimensional world. Building on the investigations of line in the early weeks of the semester, we move on to a juncture where the boundary between this most abstract of elements begins to blur into another element – value, or tone – in all of its orchestral richness.

Hong Chun Zhang: Hairy Art 30 Jul Click to enlarge Chinese artist Hong Chun Zhang, now living and working in Kansas, has found a balance between her Chinese and American artistic educations and cultures. Her painting and drawing foundation from China was very rigorous, but her content choices are now less restricted due to her US exposure. Much of her work revolves around hair, something she identifies with, and characterizes her to some degree through her own long hair, in addition to being something Zhang finds both beautiful and at times repulsive. She has charcoal drawings on larger-than-life scrolls to emphasize the length, and very realistic oil paintings on the subject matter as well.

Artist Uses Dance Movements To Create Stunning Charcoal Drawings EmailEmail New Orleans-based contemporary performance artist Heather Hansen’s work is the perfect union of dance and drawing. Her whole body moves in light and fluid dance-like motions and, just with little pieces of charcoal, she draws stunning one-of-a-kind symmetrical patterns and abstract forms on large sheets of paper. The resulting drawings are beautiful, resembling the perfect geometrical forms we see in nature, but the creation process is what moves us the most.

INSTALLATIONS Pre-Nostalgic is a 24 channel audio/visual installation of animated sound, sculpture ​ and drawing. It was created to exist as an installation and as a choreographed exhibition of moving sound and image, giving the audience a sense of full immersion and connectedness with their surroundings. Pre-Nostalgic premiered as a featured exhibition in Boundary Crossings, An Institute in Contemporary Animated Arts held in Portland, OR 2011. at the boundaries between contemporary art, photography and fashion » Charcoal Drawings by Anouk Griffioen Anouk Griffioen is a Dutch artist whose charcoal drawings bridge the worlds of fashion photography and art. In a way she brings together the best of both worlds, maintaining a level of detail that respects the real subject, but with an overall aesthetic that seems to bring across emotion more powerfully than a photograph would. From certain angles it seems that the subject of the portrait is a carrier of the artists own personality – almost a self portrait within an alternate vehicle. Her portraits focus on the model’s form and expressions, and the textures and shapes formed by the clothing take an important role in the mood and composition. Ironically, at one point in her career she decided to reduce the fashion component in her drawings in order to gain wider acceptance within the art world. She found that the result was a surprising increase in the role of fashion in her work.

Self Portrail Stencil I am soooo excited about this one. Please do try it, especially you journal artists. It is a lot more fun than you'd think to manipulate images of yourself. Although I make stencils a lot, it had never occurred to me to do a self-portrait until I read Randi Feuerhelm-Watts' brilliant book, Wide Open. If you don't have her book, go get it today. mixed media portrait lenore lovely vintage portrait African American woman original mixed media painting. art and flora

How to Draw Hair, Part 1 Looking back at my tutorials on drawing the head, I realized that I covered individual features, but completely left out hair. This tutorial will is split into 3 parts: The Basics, Types of Hair, and a Step by Step drawing. I’ll start this first part of the series with common mistakes that I see all the time. Common Mistakes when Drawing Hair Look Within: Self-Portraiture - the arts(7,8,9,10) - ABC Splash - Skip to content Add this to your favourites Look Within: Self-Portraiture Human Figure Drawing Proportions START WITH A (3 x 4) OVAL. Divide this head like this:The top of the skull.The pupils are in the middle of the head, top to bottom.The bottom of the nose is about 1.5 eye widths from the eye line.1 eye width below the nose is between the lips.1/3 below between the lips and the chin is the chin crease.I started with an oval that fit on my skull's front view. My horizontal center line of the skull dividing the top to bottom is between the pupils. My head is 5 eyes wide not including my ears. When drawing the head I consider the horizontal eye line the center of the head. I believe the ear gets longer with age.

Chuck Close Presenting Partner: Citi ‘Chuck Close is magician and mythbuster all in one’ –Washington Post How to Draw Eyes For a video version of this tutorial visit www.proko.com/how-to-draw-eyes-structure This tutorial is a continuation of How to Draw the Head from Any Angle. I will go over the structure of the eye and detailed information on drawing the brow ridge, eyeball, eyelids, eyelashes, iris, cornea, and pupil.

Samuel van Hoogstraten Painter and writer, Hoogstraten is best remembered for his experiments in perspective. His perspective box, 'A Peepshow', is the best surviving example of this aspect of his art. His preoccupation with perspective may have been stimulated by his contact with Carel Fabritius when they were both students of Rembrandt in Amsterdam. Hoogstraten was a native of Dordrecht, where he was first trained by his father. He moved to Amsterdam shortly after his father's death in December 1640 and received further training in the studio of Rembrandt, at the time when Carel Fabritius was also there. His early works show the influence of Rembrandt.