IEEE - The world's largest professional association for the advancement of technology 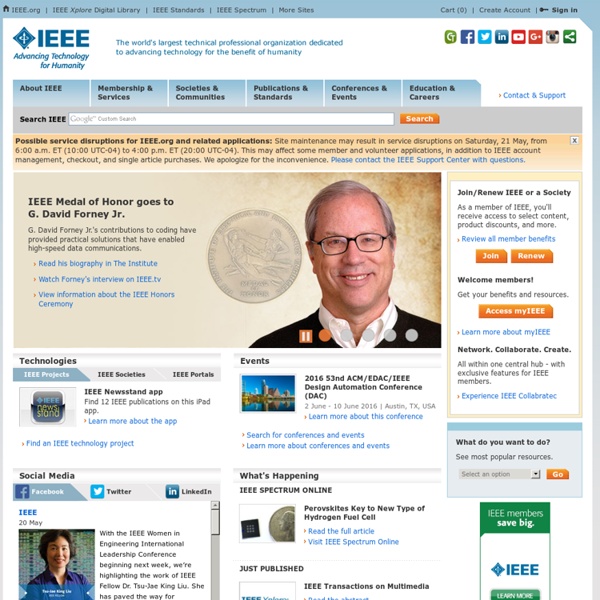 Applications developer: Job description Applications developers translate software requirements into workable programming code and maintain and develop programs for use in business. Most will specialise in a specific development field - such as mobile phone applications, accounting software, office suites or graphics software - and will have in-depth knowledge of at least one computer language. The work of an applications developer differs with a systems developer in that systems software allows a computer to actually run. The Best Portable Apps A portable app is a “lite” version of a software, which can be run without being installed on the host computer, and which doesn’t modify the computer’s configuration information. In other words, you can run it, use it, and no-one will ever know you were there. 5 Websites For Every Portable Application On The Web 5 Websites For Every Portable Application On The Web You already know that some applications offer portable or "soft" installations, but don't you wish there was some place on the Internet where you could find any portable application? Read More Apart from being more flexible and secure when working on public computers, another good use for portable apps is to keep your number of installed apps to an absolute minimum. Installed programs take up space and can cause a computer to run slower, so the less you have installed the better.

How to search like a spy: Google's secret hacks revealed The National Security Agency just declassified a hefty 643-page research manual called Untangling the Web: A Guide to Internet Research (PDF) that, at least at first, doesn't appear all that interesting. That is, except for one section on page 73: "Google Hacking." "Say you're a cyberspy for the NSA and you want sensitive inside information on companies in South Africa," explains Kim Zetter at Wired. Popular Testosterone Therapy Lacks Evidence Testosterone-replacement therapies promise to bring increased muscle mass, a heightened sex drive, more energy and maybe even some extra vigor in the golf swing for men with "low-T," or low levels of testosterone. But in the last five years, even as low-T has become a buzz word, some have questioned the claims of products that offer to boost levels of the hormone and improve fitness, libido and mental focus. Through prescription patches, injections and gels, along with the advent of "T-Clinics," where men can receive testosterone injections, the hormone is more readily available than ever, said Dr. Robert Schwartz, a geriatrics professor at the University of Colorado School of Medicine. But in June, the Food and Drug Administration (FDA) announced that all manufacturers of approved testosterone products must include a label that warns users about the risk of blood clots in the veins that the products may pose. [8 Tips for Healthy Aging]

Applications programmer: job description Applications programmers are responsible for designing and modifying computer applications. They are also required to implement their systems and to offer training and support. What does an applications programmer do? Typical employers | Qualifications and training | Key skills 5 Blog Platforms for Teachers Compared In One Chart Maintaining a blog is my first suggestion whenever I am asked to give a recommendation for a good way to keep parents informed about what is happening in classrooms. The blog can be updated by teachers or by students and teachers. To help teachers decide which blogging platform could be best for them and their students, I created the following chart. The chart compares eight key elements of five common blogging platforms.

Beach Bummer: Toxic Slime Will Hit Lake Erie Again Slimy green mats of toxic algae will again threaten the western shores of Lake Erie later this summer, according to an algae forecast released today (July 10). The predicted Lake Erie algal bloom will be smaller than in the past three years, but still above the average for the past 12 years, according to the National Atmospheric and Oceanic Administration (NOAA) forecast. The algae are also expected to collect on certain shorelines instead of spreading out evenly across the lake, NOAA said in a statement. In previous years, the toxic algae have clung to the western third of the lake, in Ohio and southern Ontario. The 2014 Lake Erie algae bloom forecast, as compared to previous years.Credit: NOAA This year's forecast calls for some 24,250 tons (22,000 metric tons) of blue-green algae to overtake Lake Erie's waters, while the average since 2004 is 15,430 tons (14,000 metric tons).

Multimedia programmer: Job description A multimedia programmer works with different multimedia features such as, text, sound, graphics, digital photography, 2D/3D modelling, animation and video to create products such as websites or computer programmes. Multimedia products mainly work on the internet but can also be used in: interactive television; information kiosks; DVDs; CD-ROMs; computer games consoles; mobile phones. The 2014 Honor Roll: EdTech’s Must-Read K–12 IT Blogs Every year, thousands of educators flock to annual conferences to hear what the best and brightest minds of the industry are up to. But what if you could hear from these luminaries every day? That's part of what makes our latest list of the top 50 K–12 ed tech blogs special.

ftp () NOTE: click here if you get an empty page. FTP(1) BSD General Commands Manual FTP(1) ftp - Internet file transfer program Future Drones Could Mimic Birds and Bats The flight habits of birds, bats and insects could inspire new designs of flying robots, say scientists who are using nature as a guide for developing innovative drone technologies. As part of a broad investigation of bioinspired flight control, 14 different research teams are stealing ideas from nature to make novel improvements to the capabilities of drones. "Whether this is avoiding obstacles, picking up and delivering items, or improving the takeoff and landing on tricky surfaces, it is hoped the solutions can lead to the deployment of drones in complex urban environments in a number of different ways," officials from the Institute of Physics (IOP) in the United Kingdom said in a statement. [5 Surprising Ways Drones Could Be Used in the Future]