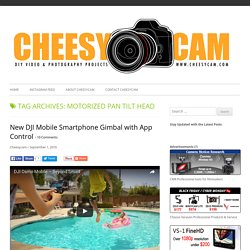 Yes, there are already plenty of existing smartphone gimbals on the market, but what makes the OSMO Mobile different is the way the gimbal interacts with the smartphone via the DJI GO app. A few features are Face Tracking to automatically pan and tilt the gimbal, work as a Motorized Pan Tilt head for motion timelapse, and even Live Stream to YouTube and Facebook from within the app. As far as Smartphone Gimbals go, I think they just stole the show. There's a list of other features for the OSMO Mobile available now at the DJI Website (found here). Cruising the NAB Show floor this year, the CAME-TV Accordion Jib with it's odd looking design got a fair share of attention. So this video walks you through my assembly of the CAME-TV Accordion Jib which is actually quite simple. Came-TV Motorized Accordion Jib Telescoping Video Crane For more information about Senna products, you can check out their website at Specifications. Résultats Google Recherche d'images correspondant à. 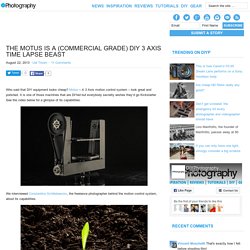 Motus – A 3 Axis motion control system – look great and polished. It is one of those machines that are DIYed but everybody secretly wishes they’d go Kickstarter. See the video below for a glimpse of its capabilities. We interviewed Constantino Schillebeeckx, the freelance photographer behind the motion control system, about its capabilities. UT: How did the project start? CS: The evolution of the project has been a long and sinewy one. Initial sketches of pan/tilt design UT: Can you explain how Motus is used? CS: Motus is, currently, a 3-axis (dolly, pan, tilt) motion control system; what that means is that through the control box, you can program a specific path of motion, and then repeat that path of motion exactly.

Fully assembled pan/tilt with built in stepper drivers (big easy drivers); side view UT: That sounds pretty interesting, for the sake of photographers who are starting out, can you list the parts in the system. Pan/Tilt Module. Download Sketchup file Hey, new thing! 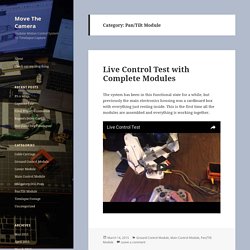 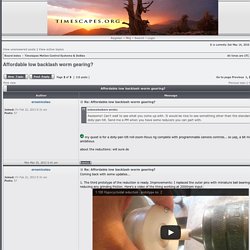 @geraldft:Hi, there! No, I didn't know about HD's plastic drives. Sounds very lightweight, but not too torquey. About the near-zero backlash market: 1. besides HD (japanese guys, with a foot in Europe via Germany and a foot in the US - nice guys, I've been discussing with some of them), there's also a Chinese factory, TOTEL, independent from them, looks-like, which manufacture the same HDs, but with sadly the same price ranges (quite surprisingly, when you consider the Chinese are actually much cheaper in many fields - but alas, not here). Projects/PanAndTiltCameraBase - Nordeast Makers. PanoTilt Project Documentation[edit] Last Edit: 6/3/15 This project is inspired by the old defunct Open Moco project, and the companies that have arisen from the old open source projects--eMotimo and Dynamic Perception. 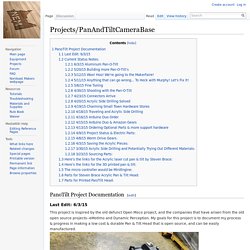 My goals for this project is to document my process & progress in making a low cost & durable Pan & Tilt Head that is open source, and can be easily manufactured. Current Status Notes: LCD Servo Robot Head. All Acrylic P&T. So I have been playing around for that last few month looking to built out my own Pan and Tilt that could run OpenMoco or other real time pan and tilt software. 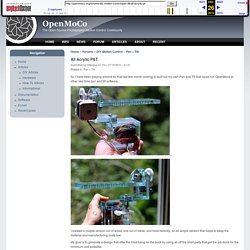 I created a couple version out of wood, one out of metal, and most recently, an all acrylic version that helps to keep the material and manufacturing costs low. My goal is to generate a design that offer the most bang for the buck by using all off the shelf parts that get the job done for the minimum cost possible. I have been having good luck with Acetal gears, thrust bearings, and acrylic for the structural components. This combination takes the weight of my 7D + moderate weight lens without issues. Currently I am running Easy Stepper Drivers and some $20 motors from Jameco. DIYcrap: OpenPanTilt, a DIY 3D-printed Pan and Tilt head for DSLR timelapse photography. I hereby present OpenPanTilt, a 3D-printed Pan/Tilt head for timelapse photography with DSLR. 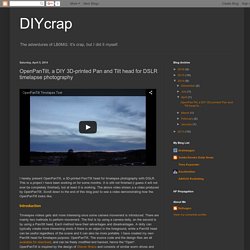 This is a project I have been working on for some months. It is still not finished (i guess it will not ever be completely finished), but at least it is working. The above video shows a a video produced by OpenPanTilt. Scroll down to the end of this blog post to see a video demonstrating how the OpenPanTilt looks like. Introduction Timelapse videos gets alot more interesing once some camera movement is introduced. 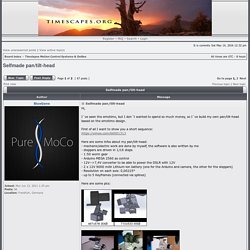 I'm a little behind you, still waiting on parts, and planning on making some changes as I go. This head is meant to be an experimental prototype for learning what works and what gets changed. Thanks for the link to the Servocity rotating hub. They add new products so often its hard to keep up.