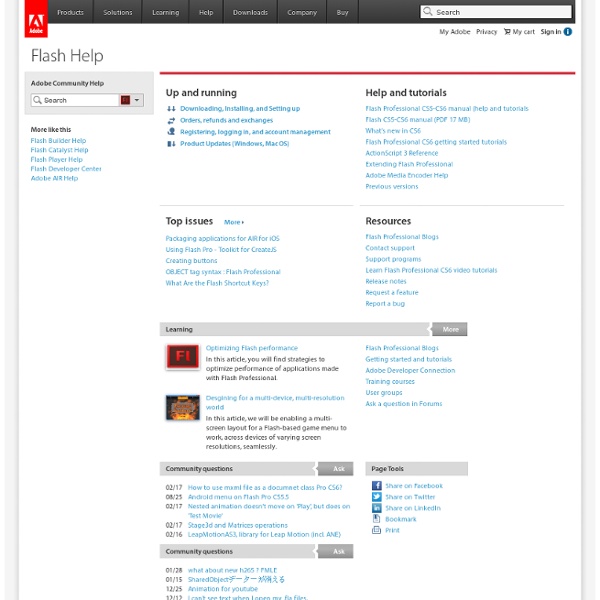 zeh - portfolio version 12 Classes and MovieClips, Page 1 by kirupa | 28 May 2007 In Flash CS3, you have support for creating ActionScript 3.0 (AS3) projects. Besides allowing you to write code in the new AS3 language, there are some subtle differences that may go unnoticed unless you are actively looking for new things. One such difference is what happens when you create or convert something into a new movie clip. With AS3 projects, when you convert or create something into a movie clip, you specify the name of your movie clip like you always did. By accessing the class and writing code directly inside it, you can bypass adding code using the timeline. The actual code is defined inside the class itself. In this article, I will explain how to take a movie clip, create a class file for it, and write some code inside the class file to create the animation you see above. First, you will need to create a movie clip. The following instructions explain how to setup your movie and specify the blue circle: [ draw a blue, solid, filled circle ]

Using pixel fonts - ActionScript.org Flash, Flex and ActionScript Resources This user is yet to take control of their account and provide a biography. If you are the author of this article, please contact us via support AT actionscript DOT org. View all articles by Andre Assalino Written by: André Assalino, me@andreassalino.com , www.andreassalino.com Difficulty Level: beginner Requirements: Flash MX and higher. Pixel fonts can be used to give a more clean look to the site, or just to avoid Flash's antialiasing. If you are going to use a pixel font, then you must have the textfield in Dynamic Text and embedd all characters. For that you have the option "characters" (in the properties panel) where you must choose wich characters you want to embedd. If you don't have lots of text, just do Auto Fill, otherwise if you do have a big text or if it's loaded from outside of the swf, i recommend picking the options who will make the text display properly. Don't forget that each pixel font has a proper size! Save your .fla as font.fla and publish as SWF. If you? Cheers, Andr?

XML Music Player By Blue_Chi | Flash CS3 | ActionScript 3.0 | Intermediate | Page 1, 2, 3, 4, 5, 6 In the final section of our tutorial we add one final feature and will fix any bugs that might pop up if you decide to make some small variations to the player, we will also polish the code and optimize it. Here is the outline of this section: Adding a feature for continuous playback. Fixing possible bugs. Continuous Playback Currently our gallery will stop playing once a song finishes, we need to add the feature to make it automatically move to the next song once a track finishes playing. function playSong(mySong:Number):void{ var myTitle = my_songs[mySong]. title_txt.text = myTitle; artist_txt.text = myArtist; if (my_channel){ my_channel.stop(); } my_sound = new Sound(); my_sound.load(new URLRequest(myURL)); my_channel = my_sound.play(); my_channel.addEventListener(Event.SOUND_COMPLETE, onNext); } We are registering our event listener with the same function we used for our next_btn. That should do it.

1 Introduction 2 Examples 2.1 Basic examples, single file2.2 Basic examples, multiple files2.3 Displaying the loading progress2.4 Using targetspecific listeners2.5 Errorhandling2.6 Queuemanagement2.7 Miscellanous3 API3.1 Constructor 3.2 Static constants 3.3 Loading and observing targets3.4 Managing the queue3.5 Managing listeners 3.6 Events3.7 Configuration3.8 Getters, getting information about the loading process4 FAQ5 Donations6 Bugs7 Support8 History9 Status and copyright10 License For Use As Colin Moock, the author of Actionscript - The Definitive Guide stated lately: Preloading still is a major problem for a lot of flashers. The different interfaces to the different filetypes (SWF, XML, Text, Sound), the asynchronous behaviour of the loading process and the uncomplete errorhandling alltogether make preloading really hard to handle. This is why Colin started a petition and proposed a new interface for preloading. The LoaderClass is based on Colin's interface proposal. back back

A Guide To iOS SDK For Web Designers Advertisement As a designer looking to broaden your skill set, you’ve decided that learning how to make native apps for Apple’s iOS platform is an attractive and potentially lucrative prospect. With a frisson of excitement, you start to do some research. The euphoria is short-lived however, as you quickly discover that unless you are an experienced programmer, the task is far from easy. The documentation provided by Apple is aimed at those with a degree in computer science. This post will help you get to know the iOS development tools a little better. The result will look like this: Going Native? By “native” iOS development, we mean using Apple’s software development kit (SDK) and the programming language Objective-C to author apps for the iPhone, iPod Touch and iPad. In relaxing the App Store’s submission review guidelines in September 2010, Apple made it easier for developers to use third-party frameworks and more familiar languages, such as HTML, CSS and JavaScript, to create apps.

Working with 9-slice scaling Description MovieClip.scale9Grid You can use 9-slice scaling to specify component-style scaling for movie clips. 9-slice scaling lets you create movie clip symbols that scale appropriately for use as user interface components, as opposed to the type of scaling typically applied to graphics and design elements. With the previous flash versions you had an unwanted behavior when you scaled a symbol with rounded corners: With the new Flash 8 you can define a scale9Grid in order to mantain the aspect of the corners and scale only the center part of the symbol. Below here you can see a practical example of the scale9 working in flash 8: As you can see the rounded corners are not scaled as the rest of the symbol, this because i edited the scale9 grid directly in the library. When a scale9Grid property is defined for a movieclip, the movie clip is divided into a grid with nine regions, based on the scale9Grid rectangle, which defines the center region of the grid 1. 2. Create a new document.

stateManager Due to the success (and quality) of Asual's SWFAddress, I've decided to stop work on this project. SWFAddress is now capable of all the things that StateManager is, so it doesn't seem very beneficial to the open source community to continue development on StateManager. The source code and examples will remain available but no longer be updated, but keep checking xa for other open source code! Within days after posting the above message, Rostislav Hristov (the creator of SWFAddress) sent me a very flattering email asking me to join the SWFAddress team. While I probably won't be able to contribute too much time to the project, Rostislav has informed me that he has incorporated my Safari findings into the SWFAddress code base. The flash community has been talking about, and proposing solutions for, "fixing the back button," for much longer than I've been developing in Flash, but when a sunKING client asked for a working back button in their flash site, I decided to have a go at it. Part I

How to Write a Web Design Proposal You became a web designer to create great web sites and applications. The plan didn’t include dealing with slow paying clients or spending countless hours trying to find work. It also didn’t include having to write proposals after you find prospective clients. If you plan on paying the bills, you1 can’t avoid these painful activities. Here we’re going to take a look at hacking the proposal writing process. Anatomy of a Proposal Before you can quickly and efficiently write amazing proposals, you’ll need some basic background on what a persuasive proposal is made of. A persuasive proposal has three parts: Problem statementProposed solutionPricing information You’ll have everything you need as long as you include these essential elements. Problem statement An effective proposal describes a client’s needs and their drivers. The best way to show what this means is by example. You might see something like this on a mediocre proposal: Why is this mediocre? See the difference? Proposed Solution