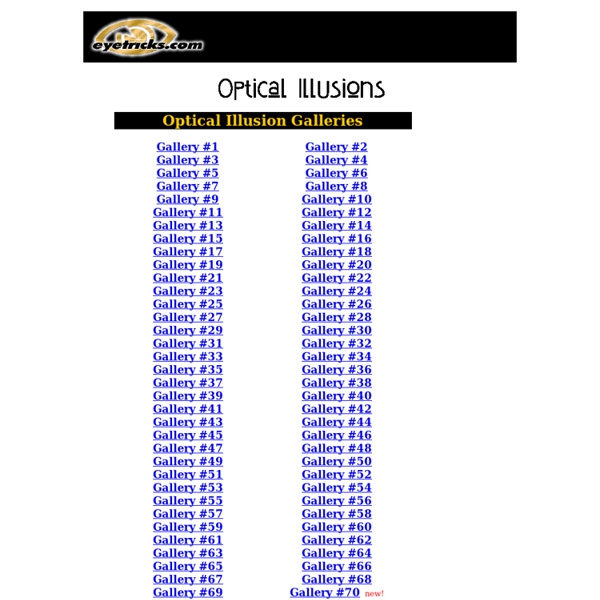 Software: Image to HTML Converter Most web pages are made up of HTML files linked to separate image files. Here's a way to embed an image directly into an HTML file. Enter the URL of any JPEG, PNG or GIF on the web: How does it work? Why does it take so long to load? To combat this, the HTML table uses basic RLE compression. Why does it take so long to display? So it's big, bloated and slow. However, it is the seed for a powerful tool. The lesson here is to think outside the box. What's next?

Earth Science Picture of the Day Optical Illusions and Visual Phenomena png2ico - PNG to icon converter (Linux,GNU,Windows,Unix) [Overview] [News] [Utilities] [Articles] [Science] [Old] Converts PNG files to Windows icon resource files. If you're looking for a program to create a favicon.ico for your website, look no further. If you need instructions or don't even know what a favicon is, check out my short tutorial on how to create and install a favicon.ico. The program is extremely simple to use. To create a favicon.ico that contains a logo in the resolutions 16x16 and 32x32 (an icon can contain multiple images of different sizes, but a single 16x16 image is enough for a favicon), you would use a command like the following: png2ico favicon.ico logo16x16.png logo32x32.png Download If you use Windows, then download the following package that contains a ready-to-run executable and documentation: png2ico-win-2002-12-08.zip (90K) ATTENTION! On other platforms, you will have to compile the program yourself.

Optical Illusions - Free Picture Illusions prefuse | interactive information visualization toolkit Creative and Humorous Food Photography Really Really Creative and Funny Food Photos This is a collection of creative and very funny photography with Food and drinks. These photographers have used their amazing talent in giving these food items shapes and situations to make it humorous. Some of them are specially great like marshmallows and oranges ones. Click on images to go to original Sources. .: OMG :. by ~Ytse80 Eggbert ‘Casanova’… by *Rerinha Don’t eat me by ~Kawaychelo-Yaoychelo Massacre by *Alephunky You’re Toast. by ~cake-monsterr When McCain Smiles attack. by ~AppleSkins Chick in Chains by *HerrBuchta Egglife – It could be worse by ~Bella-Irae Suicide OREO by *Rerinha Apple A Day by *Doctor-Gus The Cola Wars by *caycowa Cannibalism by *finkycake Vampire Egg by ~partyeskimo Sausage Killer by ~andyy008 eat or been eaten by ~foorebellion Tragedy by ~xMandaPanda How Orange Juice Is Made by ~ariesleovirgo Gummie bears play doctor by ~emma-frost Awkward Moment by ~MegaSquishy

15 cool word illusions If you're a regular visitor (reader) of my blog, you'll probably know that I really like optical illusions. Here's another article about this phenomenon, now it's all about optical illusions with words. I'll start off with a classic. Check out the following image. Say aloud the ink color of each word. How quickly can you do it? The next one is a really cool wedding card. This one is pretty strange. What do you read here? Somewhat simular to the previous illusion. When looking at the following illusion, you'll probably read the word Life. Another double word illusion. The following illusion looks like a couple of blocks don't doing anything. This is a double word illusion that fits exactly in this topic. Read the text in the triangle below out lout. Did you read I love Paris in the springtime? In this illusion you'll read the word Teach and the reflection of it. The following four illusions show faces of people. Bonus: FFF Count the "F's" that are in the following text. Wrong. Bonus 2: Face