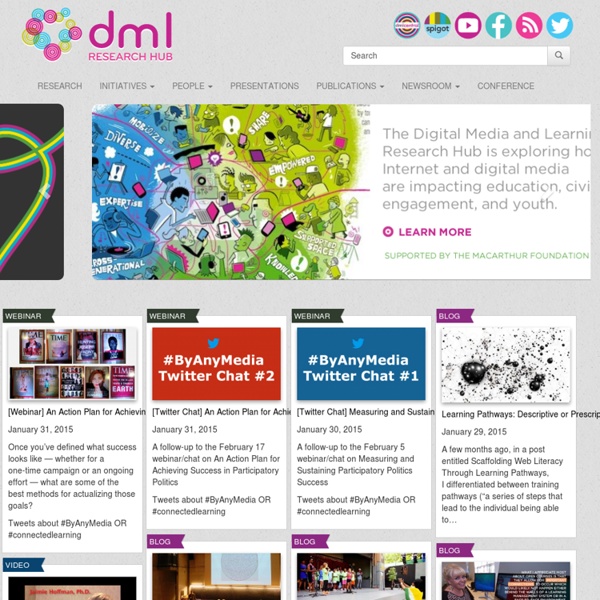 Skip to main content Skip to navigation Previous Pause Next blog Networks: What You Don’t See is What You (for)Get Nishant Shah April 16, 2014

George Veletsianos » My Publications Books Veletsianos, G. (2016). Social Media in Academia: Networked Scholars. Don, a senior vice president for sales at a global manufacturing company, wakes up late, scrambles to get showered and dressed, has an argument with his teenage daughter over breakfast, then gets stuck in traffic on the way to work and realizes he will be late for his first meeting. Donna, a marketing executive, wakes at 6 for a quick spin on the exercise bike, takes a moment to stretch and relax, then quickly gets herself ready, dresses and feeds her two kids before walking them to the bus, then catches the train to the office. Which executive will have a more productive day at work?

Don Tapscott: Discovery Learning Is the New Higher Learning Encyclopedias, record labels and publishers were once in the business of producing unique content that generated big revenues. All are being bludgeoned by the digital age that brought abundance, mass participation, democratized production and the rise of a new delivery channel -- the Internet. A similar fate could soon await Canada's universities. On the surface, they may seem in good health.

Have Students Create Infographics Using Google Draw For a presentation I am giving at the JEA/NSPA Spring National High School Journalism Convention April 26th, I needed to figure out how to do Infographics using Google tools. I’ve long been a fan and user of Google Draw, but I have not tried to actually make an infographic before. I found it surprisingly easy to make the necessary elements right in Google Draw. There are other tools out there to create Infographics, but there are some distinct advantages to using Google.

Social Media: Why This Matters To Everyone In Education August 12, 2012 in Volume 2 HETL Note: We are pleased to present “Social Media: Why It Matters to Everyone in Education” – an opinion article by Daniel Clark. The article explores social media and the use of social media in an educational context applying a staged model proposed by the author. As we’ve watched digital networks reshape just about every aspect of business these days, I’ve found that we’ve struggled to come up with the right words and ways to describe a very different way of working. From vast app stores and pervasive streams of big data to enterprise social networks and customer engagement, the rules that Internet-based models of business impose are often very different. Yet some well-known elements of business haven’t necessarily changed and have only become more pronounced: For example, scale is one of the single biggest challenges in moving to digital and social business, but has also been a challenge in our globalized world for some time. Today’s pervasive network connectedness is making this factor ever more pronounced.

Poverty as a Childhood Disease Photo Poverty is an exam room familiar. From Bellevue Hospital in New York to the neighborhood health center in Boston where I used to work, poverty has filtered through many of my interactions with parents and their children. I ask about sleeping arrangements. Mother, father, older child and new baby live in one bedroom that they’re renting in an apartment, worrying that if the baby cries too much, they’ll be asked to leave.

Beyond Minecraft: Games That Inspire Building and Exploration By Tanner Higgin, Graphite The success and popularity of Minecraft in and out of classrooms is no surprise. It’s one of the best examples of the potential of learning with games because it embraces exploration, discovery, creation, collaboration, and problem-solving while allowing teachers to shepherd play toward any subject area. Jan05_01 Editor’s Note: This is a milestone article that deserves careful study. Connectivism should not be con fused with constructivism. George Siemens advances a theory of learning that is consistent with the needs of the twenty first century. His theory takes into account trends in learning, the use of technology and networks, and the diminishing half-life of knowledge. It combines relevant elements of many learning theories, social structures, and technology to create a powerful theoretical construct for learning in the digital age.

Over the last few weeks, several important parallel threads in social collaboration have begun flowing together at long last, though still a little uneasily yet. From this discussion I believe there's a real chance to address some long-standing social business challenges if we can work through and address these issues better than we have up until now. Unfortunately, any progress will require connecting some technology thinking with some business thinking, which is the quintessential oil and water of the information technology divide. However, I believe we can now do this better than we ever could in the recent past and that a major opportunity lies ahead. Specifically, these threads are: Social Approaches to Learning Theory Comparison Chart Nardi (1995) compares and contrasts the various social learning theories, which draws attention to the subtle differences between the theories. We have prepared a three column chart that organizes these subtle differences. Our hope is that you will find this chart to be a valuable reference tool for future use (i.e.

TCEA 2015: How to Inspire a Love of Big Data When they're learning new things, kids and adults often ask, “I don’t get it. When am I ever going to need to know this?” Data is no stranger to this kind of thought. When we are presented with mountains of data, our eyes tend to glaze over.