Can You Build Your Business on Somebody Else's Platform? Many of you will know that Twitter unexpectedly cancelled it’s contract to allow DataSift to resell Twitter data to 3rd parties. 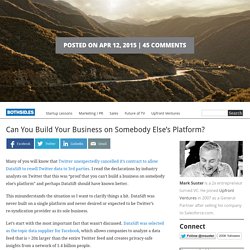 I read the declarations by industry analysts on Twitter that this was “proof that you can’t build a business on somebody else’s platform” and perhaps DataSift should have known better. This misunderstands the situation so I want to clarify things a bit. DataSift was never built on a single platform and never desired or expected to be Twitter’s re-syndication provider as its sole business. Let’s start with the most important fact that wasn’t discussed. DataSift was selected as the topic data supplier for Facebook, which allows companies to analyze a data feed that is > 20x larger than the entire Twitter feed and creates privacy-safe insights from a network of 1.4 billion people. But of course customers will have to do some technical work to migrate products and will lose DataSift functionality that Twitter / Gnip does not possess directly. 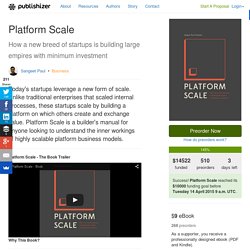 Unlike traditional enterprises that scaled internal processes, these startups scale by building a platform on which others create and exchange value. Platform Scale is a builder's manual for anyone looking to understand the inner workings of highly scalable platform business models. Platform Scale - The Book Trailer Why This Book? We're living in an age of unprecedented scale. Over the last decade or so, we're seeing the emergence of a new form of scale. Many of these startups aren't selling a product or service any longer. These startups do not scale by scaling internal employees and resources.

I wrote this book because the rules of achieving scale are fundamentally changing but they aren't understood very well. Through the last several years, I've worked with a range of companies - both startups and large enterprises - helping them design and build platforms. Who is this book for? Outside In Marketing by Steve Keifer. April 15, 2012 at 12:02 AM A few months ago I read an excellent book by Phil Simon entitled the Age of the Platform. 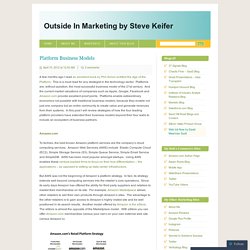 This is a must read for any strategist in the technology sector. Platforms are, without question, the most successful business model of the 21st century. And the current market valuations of companies such as Apple, Google, Facebook and Amazon.com provide excellent proof points. Platforms enable extraordinary economics not possible with traditional business models, because they enable not just one company but an entire community to create value and generate revenues from their systems. Amazon.com. How to Win With a Multisided Platform Business Model. What does it take to build a platform where many constituencies can do business? 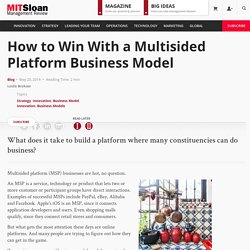 Multisided platform (MSP) businesses are hot, no question. An MSP is a service, technology or product that lets two or more customer or participant groups have direct interactions. Examples of successful MSPs include PayPal, eBay, Alibaba and Facebook. Apple’s iOS is an MSP, since it connects application developers and users. Even shopping malls qualify, since they connect retail stores and consumers. But what gets the most attention these days are online platforms. “Increasing awareness of business models and the spectacular MSP successes from the past decade have prompted many entrepreneurs and investors to attempt building or identifying ‘the next eBay,’” writes Andrei Hagiu in “Strategic Decisions for Multisided Platforms,” in the Winter 2014 issue of MIT Sloan Management Review.

It's not easy, though. So how can a new MSP position itself to be among the winners rather than the losers? The Rise of the Platform: A seismic shift in business models. Note: A variation of this article appeared as an op-ed on The Wall Street Journal’s MarketWatch. 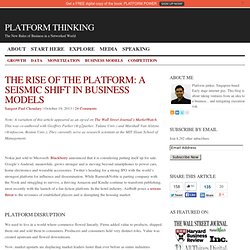 This was co-authored with Geoffrey Parker (@g2parker, Tulane Univ.) and Marshall Van Alstyne (@infoecon, Boston Univ.). They currently serve as research scientists at the MIT Sloan School of Management. Nokia just sold to Microsoft. Blackberry announced that it is considering putting itself up for sale. Google’s Android, meanwhile, grows stronger and is moving beyond smartphones to power cars, home electronics and wearable accessories. Platform Disruption We used to live in a world where commerce flowed linearly. Now, market upstarts are displacing market leaders faster than ever before as entire industries transform. Business leaders, today, develop platforms that connect diverse participants with one another and enable them to interact and transact. Three factors driving disruption We predict three factors will drive this disruption: Why companies don’t grow – The idea of the platform company. The effects of Moore’s law on the growth of the ICT industry and computing are well known.

A lesser-known but potentially more weighty law is starting to replace Moore’s law in strategic influence. Metcalfe’s law is named after Bob Metcalfe, the inventor of the Ethernet. The law states that the cost of a network expands linearly with increases in the size of the network, but the value of the network increases exponentially.

When this is combined with Moore’s law, we are in a world where at the same time as the value of the network goes up with its size, the average costs of technology are falling. TEDxESADE 2014: "Deconstructing platforms", by Albert Cañigueral. Building today's platform company : Article : Bioentrepreneur. Build a Business to Last: The Platform Model. THE BAZAAR'S OPEN SOURCE PLATFORM. Simone Cicero // dnsee interview @ FOI13. Platform Thinking.