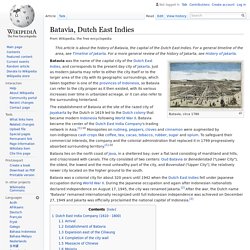 For a general timeline of the area, see Timeline of Jakarta. For a more general review of the history of Jakarta, see History of Jakarta. Batavia was the name of the capital city of the Dutch East Indies, and corresponds to the present day city of Jakarta. Just as modern Jakarta may refer to either the city itself or to the larger area of the city with its geographic surroundings, which taken together is one of the provinces of Indonesia, so Batavia can refer to the city proper as it then existed, with its various increases over time in urbanized acreage, or it can also refer to the surrounding hinterland. Applying Kartini’s Message In Present-Day Indonesia. Kartini, usually referred to by her title Raden Ajeng, was born into an aristocratic Javanese family on April 21, 1879. 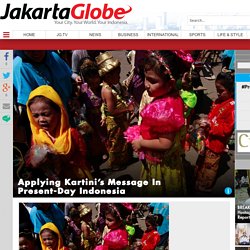 Her father was a district head of Jepara in Central Java. Her mother was his father’s first wife. Great Post Road. The Great Post Road (Indonesian: Jalan Raya Pos or Dutch: De Grote Postweg),[1] is the name for the historical road that runs across Java that connects Anyer and Panarukan. 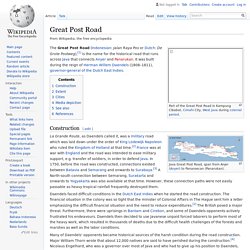 It was built during the reign of Herman Willem Daendels (1808–1811), governor-general of the Dutch East Indies. Construction[edit] Java Great Post Road, span from Anjer (Anyer) to Panaroecan (Panarukan). La Grande Route, as Daendels called it, was a military road which was laid down under the order of King Lodewijk Napoleon who ruled the Kingdom of Holland at that time.[2] France was at war with England and the road was intended to ease military support, e.g. transfer of soldiers, in order to defend Java.

Indonesia - The Java War and Cultivation System. Indonesia Table of Contents During the VOC period, the Dutch depended on the compliance of the Javanese aristocratic class, which allowed them to rule in an indirect manner. 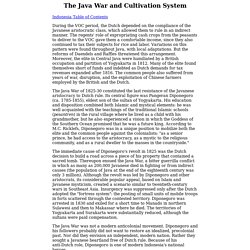 The regents' role of expropriating cash crops from the peasants to deliver to the VOC gave them a comfortable income, since they also continued to tax their subjects for rice and labor. INDONESIA. Third Javanese War of Succession. Wilhelmina of the Netherlands. Wilhelmina (Wilhelmina Helena Pauline Maria; 31 August 1880 – 28 November 1962) was Queen of the Kingdom of the Netherlands from 1890 to 1948. 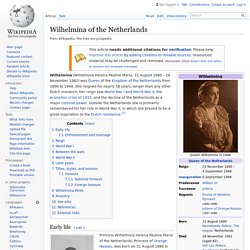 She reigned for nearly 58 years, longer than any other Dutch monarch. Her reign saw World War I and World War II, the economic crisis of 1933, and the decline of the Netherlands as a major colonial power. Outside the Netherlands she is primarily remembered for her role in World War II, in which she proved to be a great inspiration to the Dutch resistance.[1] Early life[edit] Kartini School in Indonesia: A Short Description. Kartini School in Indonesia: A Short Description. 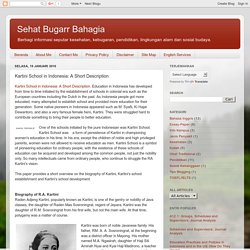 Education in Indonesia has developed from time to time initiated by the establishment of schools in colonial era such as the European countries including the Dutch in the past. As Indonesia people got more educated, many attempted to establish school and provided more education for their generation. Feminist Reads Challenge: Out of Darkness Comes Light. Evangelical Christianity and Democracy in Asia - David Halloran Lumsdaine - Google Books. The Bedhaya Court Dances of Central Java - Clara Brakel-Papenhuijzen - Google Books. Urban railway exist in form of commuter rail in Jakarta, Bandung, and Surabaya. 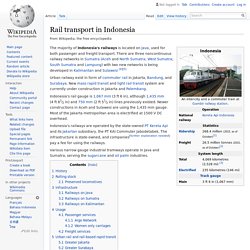 New mass rapid transit and light rail transit system are currently under construction in Jakarta and Palembang. Indonesia's rail gauge is 1,067 mm (3 ft 6 in), although 1,435 mm (4 ft 8 1⁄2 in) and 750 mm (2 ft 5 1⁄2 in) lines previously existed. Newer constructions in Aceh and Sulawesi are using the 1,435 mm gauge. 17th-century Dutch trading company The Dutch East India Company, officially the United East India Company (Dutch: Vereenigde Oostindische Compagnie; VOC) was a megacorporation founded by a government-directed amalgamation of several rival Dutch trading companies (voorcompagnieën) in the early 17th century.[1][2] It was established on 20 March 1602, as a chartered company to trade with Mughal India[3] during the period of proto-industrialization,[4] from which 50% of textiles and 80% of silks were imported, chiefly from its most developed region known as Bengal Subah.[5][6][7][8][9] In addition, the company traded with Indianised Southeast Asian countries when the Dutch government granted it a 21-year monopoly on the Dutch spice trade. 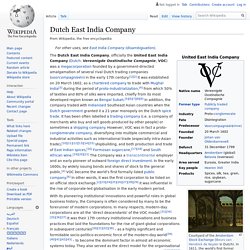 It has been often labelled a trading company (i.e. a company of merchants who buy and sell goods produced by other people) or sometimes a shipping company. Java after the Treaty of Giyanti, 1755. Untitled. You are running an unsupported browser and/or an unsupported version of the TLS Protocol. 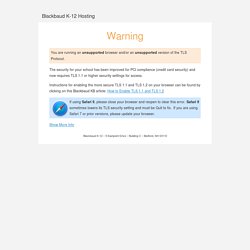 The security for your school has been improved for PCI compliance (credit card security) and now requires TLS 1.1 or higher security settings for access. Instructions for enabling the more secure TLS 1.1 and TLS 1.2 on your browser can be found by clicking on this Blackbaud KB article: How to Enable TLS 1.1 and TLS 1.2 If using Safari 9, please close your browser and reopen to clear this error. The Treaty of Giyanti (also known as the Treaty of Gianti Java, the Gianti Agreement, or the Giyanti Treaty) was signed and ratified on February 13, 1755 in Giyanti (southeast of Karanganyar, Central Java) between Prince Mangkubumi, the Dutch East India Company, and Sunan Pakubuwono III along with his allies. 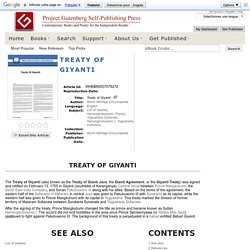 Based on the terms of the agreement, the eastern half of the Sultanate of Mataram in central Java was given to Pakubuwono III with Surakarta as its capital, while the western half was given to Prince Mangkubumi with its capital in Yogyakarta. This treaty marked the division of former territory of Mataram Sultanate between Surakarta Sunanate and Yogyakarta Sultanate. After the signing of the treaty, Prince Mangkubumi changed his title as prince and became known as Sultan Hamengkubuwono I. The accord did not end hostilities in the area since Prince Sambernyawa (or Raden Mas Said) continued to fight against Pakubuwono III. The Origins of the Java War (1825-30) on JSTOR.

With contributions from around the world, the EHR includes major articles, notes and documentations, and debates on medieval and modern themes, and an unrivalled range and quantity of reviews of books published worldwide, along with a summary of international literature, published in the September issue each year. Royal Batavian Society of Arts and sciences. Timeline of Indonesian history. This is a timeline of Indonesian history, comprising important legal and territorial changes and political events in Indonesia and its predecessor states. To read about the background to these events, see History of Indonesia. See also the list of Presidents of Indonesia. 4th century BC[edit] 2nd century BC[edit] Dutch Colonization - Indonesia Imperialism.