HSC Toolkit - Backcasting (SAT) Why use it? 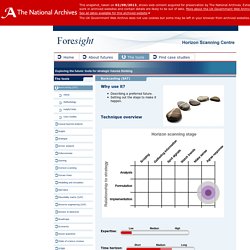 Describing a preferred future. Setting out the steps to make it happen. Technique overview. F & H Questionnaire. The Psychology of Your Future Self and How Your Present Illusions Hinder Your Future Happiness. PastFutureBackcasting. PDortmansForecastingBackcasting. FuturesUnderGlassBackcasting. Why Samsung’s phones will always run someone else’s software. This past weekend, reports out of Korea suggested that Samsung is thinking about Windows Phone on its handsets, particularly at the low end. 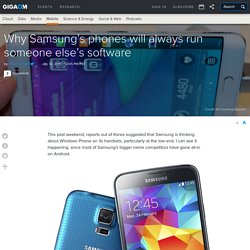 I can see it happening, since most of Samsung’s bigger name competitors have gone all-in on Android. Samsung According to the Korea Times, whose sources say that Windows Phone is appealing to Samsung again, the company has to work out some currently pending suits with Microsoft before it creates more Windows Phone handsets. Said a Samsung official to the Korea Times: If the companies settle their litigation, then Samsung will manufacture handsets powered by the Microsoft-developed mobile platform. Assuming this information is accurate, that means no new Microsoft Windows Phones from Samsung for at least six months, although we’d likely hear or see some leaked information on such devices before then.

Decisions Don't Start with Data - Nick Morgan. By Nick Morgan | 11:00 AM May 14, 2014 I recently worked with an executive keen to persuade his colleagues that their company should drop a long-time vendor in favor of a new one. 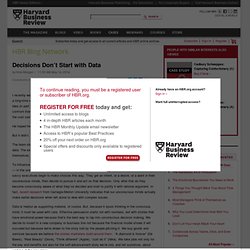 He knew that members of the executive team opposed the idea (in part because of their well-established relationships with the vendor) but he didn’t want to confront them directly, so he put together a PowerPoint presentation full of stats and charts showing the cost savings that might be achieved by the change. Steve Peters, Author Of The Chimp Paradox, Reveals How To Be Less Anxious. As the psychiatrist who helped the Olympic British cycling team tap into their vast potential and with an impending role in the 2014 World Cup, Professor Steve Peters knows a thing or two about anxiety and pressure. 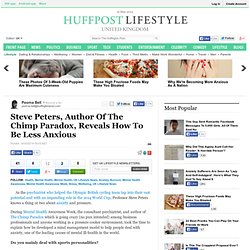 During Mental Health Awareness Week, the consultant psychiatrist, and author of The Chimp Paradox which is going crazy (no pun intended) among business professionals and anyone working in a pressure cooker environment, took the time to explain how he developed a mind management model to help people deal with anxiety, one of the leading causes of mental ill-health in the world. Do you mainly deal with sports personalities? Although I have been put into the spotlight for helping elite sports personalities to achieve their ambitions, most of my working life has been spent helping members of the public to manage mental health issues. 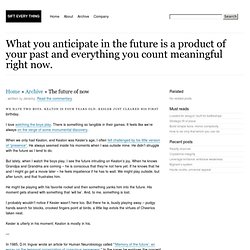 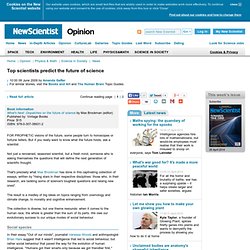 But if you really want to know what the future holds, ask a scientist. Not just a renowned, seasoned scientist, but a fresh mind, someone who is asking themselves the questions that will define the next generation of scientific thought. The future is bright for humanity - opinion - 05 March 2012. The more optimistic we are about the future of our species the better we can focus on today's challenges Read more: "100,000 AD: Living in the deep future" WHATEVER happened to the future? 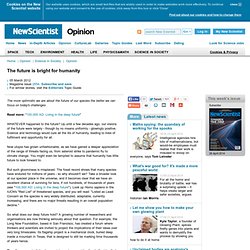 Up until a few decades ago, our visions of the future were largely - though by no means uniformly - glowingly positive. Change Your Mind. By Connirae Andreas and Steve AndreasDESCRIPTION: This advanced NLP book builds on the foundation established in Heart of the Mind, by the Andreases, and Using Your Brain–for a CHANGE, by Richard Bandler. 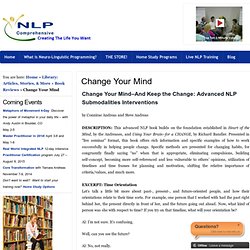 Presented in “live seminar” format, this book offers rich information and specific examples of how to work successfully in helping people change. Specific methods are presented for changing habits, for congruently finally saying “no” when that is appropriate, eliminating compulsions, building self-concept, becoming more self-referenced and less vulnerable to others’ opinions, utilization of timelines and time frames for planning and motivation, shifting the relative importance of criteria/values, and much more.EXCERPT: Time Orientation Let’s talk a little bit more about past-, present-, and future-oriented people, and how their orientations relate to their time sorts. 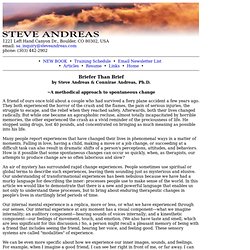 Living in the Present. Be Here Now By Michael Carroll For many people, the perception of successful living is getting an edge and staying one step ahead. 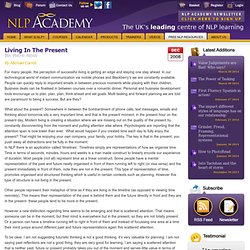 In our technological world of instant communication via mobile phones and Blackberry’s we are constantly available. Cognitive biases in futurist thinking. Hedgehog and fox finger puppetsby Linda Brown (Etsy shop owner) “No serious futurist deals in predictions”. These are the famous words of Alvin Toffler in his seminal book Future Shock from 1971. Instead, future studies usually describe a number of plausible futures pointing at different directions for the world or society. Never predicting, just analyzing uncertainty and complexity. Why do we assume the future will be short? – John Schellenberg. In Time’s Arrow, Time’s Cycle (1987), Stephen Jay Gould tells the story of one John Playfair, who in 1788 accompanied the great British geologist James Hutton to see an ‘unconformity’ at Siccar Point in Scotland. With the help of this geological visual – an ancient erosion surface dividing two layers of rock, one gently sloping, the other vertically tilted – Hutton explained to Playfair that the Earth is a machine ceaselessly repeating a cycle of erosion, deposition, and uplift.

Entrepreneurs Don't Have an Optimism Bias. By Walter Frick | 2:59 PM February 13, 2014 It comes as no surprise that entrepreneurs are an optimistic bunch. Research has confirmed as much, suggesting that entrepreneurs suffer from an “optimism bias,” one that is linked to both advantages and disadvantages. Optimism can help entrepreneurs persist in the face of a challenge, but it can also lead them to take imprudent risks.