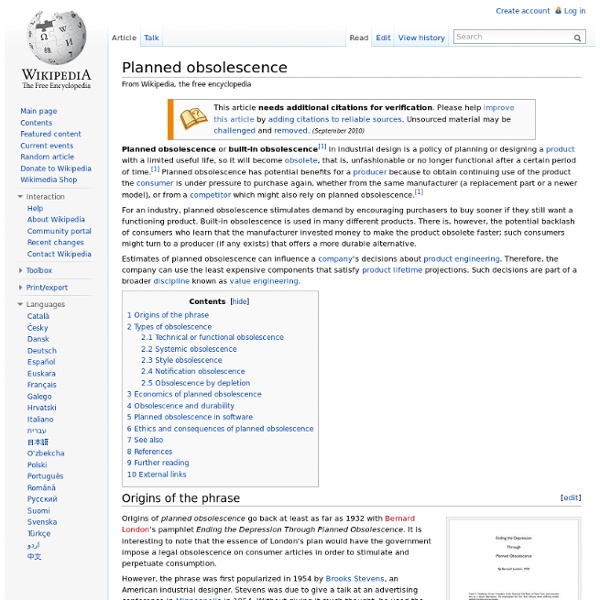 For an industry, planned obsolescence stimulates demand by encouraging purchasers to buy sooner if they still want a functioning product. There is however the potential backlash of consumers who learn that the manufacturer invested money to make the product obsolete faster; such consumers might turn to a producer (if any exists) that offers a more durable alternative. Estimates of planned obsolescence can influence a company's decisions about product engineering. Therefore, the company can use the least expensive components that satisfy product lifetime projections. Such decisions are part of a broader discipline known as value engineering. Philosophers such as Herbert Marcuse and Jacque Fresco have criticized the economic and societal implications of this model. History and origins of the phrase[edit] In the United States, automotive design reached a turning point in 1924 when the American national automobile market began reaching saturation. Types of planned obsolescence[edit]

Planned Obsolescence | falling indelibly into the past Lucius Junius Brutus Background[edit] Overthrow of the Monarchy[edit] Lucius Iunius Brutus, on right According to Livy, Brutus had a number of grievances against his uncle the king, amongst them was the fact that Tarquin had put to death a number of the chief men of Rome, including Brutus' brother. Brutus avoided the distrust of Tarquin's family by feigning slow-wittedness[1] (in Latin brutus translates to dullard).[2] He accompanied Tarquin's sons on a trip to the Oracle of Delphi. Brutus, along with Spurius Lucretius Tricipitinus, Publius Valerius Publicola, and Lucius Tarquinius Collatinus were summoned by Lucretia to Collatia after she had been raped by Sextus Tarquinius, the son of the king Tarquinius Superbus. The four men gathered the youth of Collatia, then went to Rome where Brutus, being at that time Tribunus Celerum, summoned the people to the forum and exhorted them to rise up against the king. The Oath of Brutus[edit] "The oath of Brutus" by François-Joseph Navez Consulship and death[edit] L.

Smartphone apps: Is your privacy protected? Smartphone apps can do more than provide you with entertainment, information or useful services -- they can also invade your privacy. Apps can trace your Web habits, look into your contact list, make phone calls without your knowledge, track your location, examine your files and more. They can also automatically send information such as location data to mobile ad networks. In addition, apps can gather the phone number and the unique ID number of each type of phone: the Unique Device Identifier (UDID) on the iPhone, the International Mobile Equipment Identity (IMEI) number on the BlackBerry, and (depending on the make) the IMEI or the Mobile Equipment Identifier (MEID) on an Android phone. It's not as if you weren't warned. But do you actually pay attention to what's gathered? In this article, we'll detail the kind of privacy threats you face when using mobile apps, offer advice on ways you can protect yourself, and take a look at possible legislation that may -- or may not -- help.

obsolescence programmée Marcus Junius Brutus the Younger Marcus Junius Brutus (early June 85 BC – 23 October 42 BC), often referred to as Brutus, was a politician of the late Roman Republic. After being adopted by his uncle he used the name Quintus Servilius Caepio Brutus, but eventually returned to using his original name.[1] He is best known in modern times for taking a leading role in the assassination of Julius Caesar.[1] Early life[edit] Marcus Junius Brutus the Younger was the son of Marcus Junius Brutus the Elder and Servilia Caepionis. Brutus held his uncle in high regard[6] and his political career started when he became an assistant to Cato, during his governorship of Cyprus.[7] During this time, he enriched himself by lending money at high rates of interest. Senate career[edit] When civil war broke out in 49 BC between Pompey and Caesar, Brutus followed his old enemy and present leader of the Optimates, Pompey. After the disaster of the Battle of Pharsalus, Brutus wrote to Caesar with apologies and Caesar immediately forgave him.

Repressive desublimation Repressive desublimation is a term first coined by philosopher and sociologist Herbert Marcuse in his 1964 work One-Dimensional Man, that refers to the way in which, in advanced industrial society (capitalism), "the progress of technological rationality is liquidating the oppositional and transcending elements in the “higher culture.”[1] In other words, where art was previously a way to represent "that which is" from "that which is not,"[2] capitalist society causes the "flattening out"[3] of art into a commodity incorporated into society itself. As Marcuse put it in 'One-Dimensional Man, "The music of the soul is also the music of salesmanship." By offering instantaneous, rather than mediated gratifications,[4] repressive desublimation was considered by Marcuse to remove the energies otherwise available for a social critique; and thus to function as a conservative force under the guise of liberation. Origins and influence[edit] Subsequent developments[edit] Criticism[edit] See also[edit]

How Goldman Sachs And Its Henchmen Are Starving The World For today I had intended to write another installment on what happens when the Republicans get their way and the so called “free market” is left to regulate itself. Then, a picture on Facebook caught my attention (the picture to the left) and it reminded me of a much more immediate problem. I was planning to discuss the South Seas Company founded in England in 1711. I'll come back to it in a later article. Lest you be deluded into thinking that there are some behaviors so despicable that even bankers won’t engage in them to make a buck lets take a look at food speculation. Before we do that, however, we need to understand just a little about commodities markets. Commodities markets first appeared in the United States in the 19th century and are rooted in trading agricultural products, wheat, soy, corn and some livestock. A forward contract is an agreement between two parties to exchange at some fixed future date a given quantity of a commodity for a price defined today. References:

Lucan Marcus Annaeus Lucanus (November 3, 39 AD – April 30, 65 AD), better known in English as Lucan, was a Roman poet, born in Corduba (modern-day Córdoba), in the Hispania Baetica. Despite his short life, he is regarded as one of the outstanding figures of the Imperial Latin period. His youth and speed of composition set him apart from other poets. Life[edit] Engraved title page of a French edition of Lucan's Pharsalia, 1657 He found success under Nero, became one of the emperor's close friends and was rewarded with a quaestorship in advance of the legal age. At some point, a feud began between Nero and Lucan. Other works, though, point to a more serious basis to the feud. Lucan later joined the 65 AD conspiracy of Gaius Calpurnius Piso against Nero. His father was involved in the proscription but his mother escaped. Works[edit] According to Vacca and Statius, Lucan's works included: Surviving work: Bellum Civile (Civil War), on the wars between Julius Caesar and Pompey Lost works: Notes[edit]