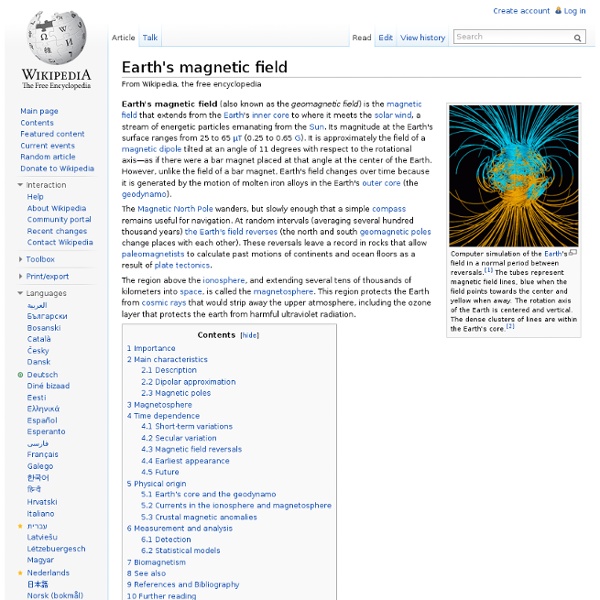 Computer simulation of the Earth's field in a period of normal polarity between reversals.[1] The lines represent magnetic field lines, blue when the field points towards the center and yellow when away. The rotation axis of the Earth is centered and vertical. The dense clusters of lines are within the Earth's core.[2] The North Magnetic Pole wanders sufficiently slowly to keep ordinary compasses useful for navigation. At random intervals, however, averaging around several hundred thousand years, the Earth's field reverses and the North and South Magnetic Poles switch places. The magnetosphere is the region above the ionosphere and extends several tens of thousands of kilometers into space, protecting the Earth from cosmic rays that would otherwise strip away the upper atmosphere, including the ozone layer that protects the Earth from harmful ultraviolet radiation. Importance[edit] Variations in the magnetic field strength have been correlated to rainfall variation within the tropics.[11] Related:  Wiki • 02/05/14

Electrical grid General layout of electricity networks. Voltages and depictions of electrical lines are typical for Germany and other European systems. An electrical grid (also referred to as an electricity grid or electric grid) is an interconnected network for delivering electricity from suppliers to consumers. Power stations may be located near a fuel source, at a dam site, or to take advantage of renewable energy sources, and are often located away from heavily populated areas. The transmission network will move the power long distances, sometimes across international boundaries, until it reaches its wholesale customer (usually the company that owns the local distribution network). On arrival at a substation, the power will be stepped down from a transmission level voltage to a distribution level voltage. Term[edit] The term grid usually refers to a network, and should not be taken to imply a particular physical layout or breadth. History[edit] Features[edit] Structure of distribution grids[edit]

Swarm reveals Earth’s changing magnetism -- ScienceDaily The first set of high-resolution results from ESA's three-satellite Swarm constellation reveals the most recent changes in the magnetic field that protects our planet. Launched in November 2013, Swarm is providing unprecedented insights into the complex workings of Earth's magnetic field, which safeguards us from the bombarding cosmic radiation and charged particles. Measurements made over the past six months confirm the general trend of the field's weakening, with the most dramatic declines over the Western Hemisphere. But in other areas, such as the southern Indian Ocean, the magnetic field has strengthened since January. The latest measurements also confirm the movement of magnetic North towards Siberia. These changes are based on the magnetic signals stemming from Earth's core. This will provide new insight into many natural processes, from those occurring deep inside our planet to space weather triggered by solar activity.

Extremely low frequency 1982 aerial view of the U.S. Navy Clam Lake, Wisconsin ELF transmitter facility, used to communicate with deeply submerged submarines. Extremely low frequency (ELF) is the ITU designation[1] for electromagnetic radiation (radio waves) with frequencies from 3 to 30 Hz, and corresponding wavelengths from 100,000 to 10,000 kilometers.[2][3] In atmospheric science, an alternative definition is usually given, from 3 Hz to 3 kHz.[4][5] In the related magnetosphere science, the lower frequency electromagnetic oscillations (pulsations occurring below ~3 Hz) are considered to lie in the ULF range, which is thus also defined differently from the ITU radio bands. Alternate definitions[edit] Military communications[edit] Explanation[edit] Because of its electrical conductivity, seawater shields submarines from most higher frequency radio waves, making radio communication with submerged submarines at ordinary frequencies impossible. Difficulties of ELF communication[edit] Ecological impact[edit]

Cross product If the vectors have the same direction or one has zero length, then their cross product is zero. More generally, the magnitude of the product equals the area of a parallelogram with the vectors for sides; in particular for perpendicular vectors this is a rectangle and the magnitude of the product is the product of their lengths. The cross product is anticommutative and is distributive over addition. The space and product form an algebra over a field, which is neither commutative nor associative, but is a Lie algebra with the cross product being the Lie bracket. The cross-product in respect to a right-handed coordinate system Definition[edit] The cross product of two vectors a and b is defined only in three-dimensional space and is denoted by a × b. The cross product a × b is defined as a vector c that is perpendicular to both a and b, with a direction given by the right-hand rule and a magnitude equal to the area of the parallelogram that the vectors span. Names[edit] (the zero vector). and

Plate tectonics The tectonic plates of the world were mapped in the second half of the 20th century. Remnants of the Farallon Plate, deep in Earth's mantle. It is thought that much of the plate initially went under North America (particularly the western United States and southwest Canada) at a very shallow angle, creating much of the mountainous terrain in the area (particularly the southern Rocky Mountains). Plate tectonics (from the Late Latin tectonicus, from the Greek: τεκτονικός "pertaining to building") is a scientific theory that describes the large-scale motion of Earth's lithosphere. The lithosphere, which is the rigid outermost shell of a planet (on Earth, the crust and upper mantle), is broken up into tectonic plates. Key principles The outer layers of the Earth are divided into the lithosphere and asthenosphere. The key principle of plate tectonics is that the lithosphere exists as separate and distinct tectonic plates, which ride on the fluid-like (visco-elastic solid) asthenosphere.

Multipole expansion Expansion in spherical harmonics[edit] Most commonly, the series is written as a sum of spherical harmonics. Thus, we might write a function as the sum Here, are the standard spherical harmonics, and are constant coefficients which depend on the function. represents the monopole; represent the dipole; and so on. Here, the represent the components of a unit vector in the direction given by the angles and , and indices are implicitly summed. is the monopole; is a set of three numbers representing the dipole; and so on. In the above expansions, the coefficients may be real or complex. In the multi-vector expansion, each coefficient must be real: For describing functions of three dimensions, away from the coordinate origin, the coefficients of the multipole expansion can be written as functions of the distance to the origin, —most frequently, as a Laurent series in powers of . , from a source in a small region near the origin, the coefficients may be written as: Applications of multipole expansions[edit]

Douglas Rushkoff Douglas Rushkoff (born 18 February 1961) is an American media theorist, writer, columnist, lecturer, graphic novelist, and documentarian. He is best known for his association with the early cyberpunk culture, and his advocacy of open source solutions to social problems. Rushkoff is most frequently regarded as a media theorist and is known for coining terms and concepts including viral media (or media virus), digital native, and social currency. Rushkoff currently teaches in the Media Studies department at The New School University in Manhattan.[7] He has previously lectured at the ITP at New York University’s Tisch School of the Arts and taught a class called Narrative Lab.[8] He also has taught online for the MaybeLogic Academy.[9] Biography[edit] Background[edit] Rushkoff was invited to participate in government and industry as a consultant ranging from the United Nations Commission on World Culture and the US Department of State to Sony Corporation and TCI. Influences[edit] Themes[edit]

Lie algebra In mathematics, Lie algebras (/ˈliː/, not /ˈlaɪ/) are algebraic structures which were introduced to study the concept of infinitesimal transformations. The term "Lie algebra" (after Sophus Lie) was introduced by Hermann Weyl in the 1930s. In older texts, the name "infinitesimal group" is used. Related mathematical concepts include Lie groups and differentiable manifolds. Definitions[edit] A Lie algebra is a vector space called the Lie bracket, which satisfies the following axioms: Bilinearity: for all scalars a, b in F and all elements x, y, z in Alternating on : for all x in The Jacobi identity: for all x, y, z in Note that the bilinearity and alternating properties imply anticommutativity, i.e., [x,y] = −[y,x], for all elements x, y in It is customary to express a Lie algebra in lower-case fraktur, like . Generators and dimension[edit] Elements of a Lie algebra containing them is itself. Homomorphisms, subalgebras, and ideals[edit] The Lie bracket is not associative in general, meaning that . . . and

Earth l Earth facts, pictures and information. Earth is the third planet from the Sun and the fifth largest: Planet Profile orbit: 149,600,000 km (1.00 AU) from Sundiameter: 12,756.3 kmmass: 5.972e24 kg History of Earth Earth is the only planet whose English name does not derive from Greek/Roman mythology. It was not until the time of Copernicus (the sixteenth century) that it was understood that the Earth is just another planet. Earth, of course, can be studied without the aid of spacecraft. The Earth is divided into several layers which have distinct chemical and seismic properties (depths in km): 0- 40 Crust 40- 400 Upper mantle 400- 650 Transition region 650-2700 Lower mantle 2700-2890 D'' layer 2890-5150 Outer core 5150-6378 Inner core The crust varies considerably in thickness, it is thinner under the oceans, thicker under the continents. Most of the mass of the Earth is in the mantle, most of the rest in the core; the part we inhabit is a tiny fraction of the whole (values below x10^24 kilograms): Earth's Satellite Open Issues

Deus ex machina Deus ex machina (pronounced [ˈdeus eks ˈmaː.kʰi.na], /ˈdeɪ.əs ɛks ˈmɑːkiːnə/ or /ˈdiːəs ɛks ˈmækɨnə/[1]; from Latin, meaning "god from the machine"; plural: dei ex machina) is a plot device whereby a seemingly unsolvable problem is suddenly and abruptly resolved by the contrived and unexpected intervention of some new event, character, ability or object. Depending on how it is done, it can be intended to move the story forward when the writer has "painted themself into a corner" and sees no other way out, to surprise the audience, to bring the tale to a happy ending, or as a comedic device. Origin of the expression[edit] The Latin phrase deus ex machina, from deus, meaning "a god", ex, meaning "from", and machina, meaning "a device, a scaffolding, an artifice", is a calque from Greek ἀπὸ μηχανῆς θεός (apò mēkhanḗs theós), meaning "god from the machine". Ancient usage[edit] In modern literature[edit] Recent examples[edit] Notes[edit]