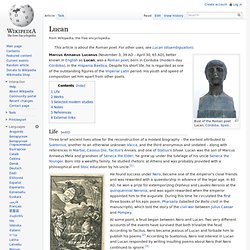 Despite his short life, he is regarded as one of the outstanding figures of the Imperial Latin period. His youth and speed of composition set him apart from other poets. Life[edit] Engraved title page of a French edition of Lucan's Pharsalia, 1657 He found success under Nero, became one of the emperor's close friends and was rewarded with a quaestorship in advance of the legal age. At some point, a feud began between Nero and Lucan. Other works, though, point to a more serious basis to the feud.

Lucan later joined the 65 AD conspiracy of Gaius Calpurnius Piso against Nero. His father was involved in the proscription but his mother escaped. Works[edit] According to Vacca and Statius, Lucan's works included: Surviving work: Bellum Civile (Civil War), on the wars between Julius Caesar and Pompey Lost works: Pharsalia. The Pharsalia was especially popular in times of civil wars and similar troubles; for example the editor of this 1592 edition, Theodor Pulmann, explains Lucan’s relevance by the French Wars of Religion (1562–98). 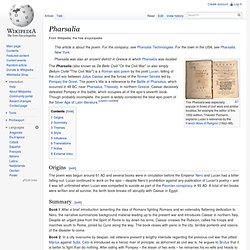 Pharsalia was also an ancient district in Greece in which Pharsalus was located. Origins[edit] The poem was begun around 61 AD and several books were in circulation before the Emperor Nero and Lucan had a bitter falling out. Lucan continued to work on the epic – despite Nero's prohibition against any publication of Lucan's poetry – and it was left unfinished when Lucan was compelled to suicide as part of the Pisonian conspiracy in 65 AD. A total of ten books were written and all survive; the tenth book breaks off abruptly with Caesar in Egypt. Summary[edit] Book 2: In a city overcome by despair, old veterans present a lengthy interlude regarding the previous civil war that pitted Marius against Sulla. Lucius Junius Brutus. Background[edit] Overthrow of the Monarchy[edit] Lucius Iunius Brutus, on right According to Livy, Brutus had a number of grievances against his uncle the king, amongst them was the fact that Tarquin had put to death a number of the chief men of Rome, including Brutus' brother. 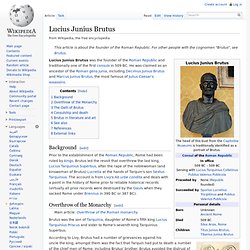 Brutus avoided the distrust of Tarquin's family by feigning slow-wittedness[1] (in Latin brutus translates to dullard).[2] He accompanied Tarquin's sons on a trip to the Oracle of Delphi. Brutus, along with Spurius Lucretius Tricipitinus, Publius Valerius Publicola, and Lucius Tarquinius Collatinus were summoned by Lucretia to Collatia after she had been raped by Sextus Tarquinius, the son of the king Tarquinius Superbus. The four men gathered the youth of Collatia, then went to Rome where Brutus, being at that time Tribunus Celerum, summoned the people to the forum and exhorted them to rise up against the king. 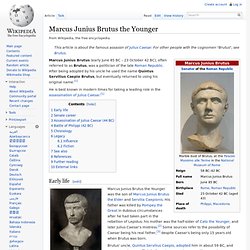 After being adopted by his uncle he used the name Quintus Servilius Caepio Brutus, but eventually returned to using his original name.[1] He is best known in modern times for taking a leading role in the assassination of Julius Caesar.[1] Classical Latin. Classical Latin is the modern term used to refer to the form of the Latin language recognised as standard by writers of the late Roman Republic and the Roman Empire . In some later periods it was regarded as "good" Latin, with later versions being seen as debased or corrupt. The word "Latin" is now taken by default as meaning "Classical Latin", so that, for example, modern Latin text books describe classical Latin. Marcus Tullius Cicero and his contemporaries of the late republic, while using lingua Latina and sermo Latinus to mean the Latin language as opposed to the Greek or other languages, and sermo vulgaris or sermo vulgi to refer to the vernacular of the uneducated masses , regarded the speech they valued most and in which they wrote as Latinitas , "Latinity", with the implication of good. 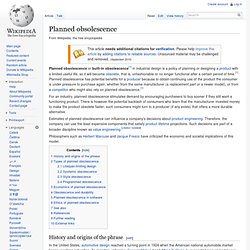 There is however the potential backlash of consumers who learn that the manufacturer invested money to make the product obsolete faster; such consumers might turn to a producer (if any exists) that offers a more durable alternative. Estimates of planned obsolescence can influence a company's decisions about product engineering. Therefore, the company can use the least expensive components that satisfy product lifetime projections.

Such decisions are part of a broader discipline known as value engineering. [citation needed] Philosophers such as Herbert Marcuse and Jacque Fresco have criticized the economic and societal implications of this model. History and origins of the phrase[edit] In the United States, automotive design reached a turning point in 1924 when the American national automobile market began reaching saturation. 20/20 Fidel Castro interview - Barbara Walters [2of6] 2008 Oscar Roundtable: Pecking Order of Actors. 2009 Oscar Roundtable: 'It's a Sexual Bond'