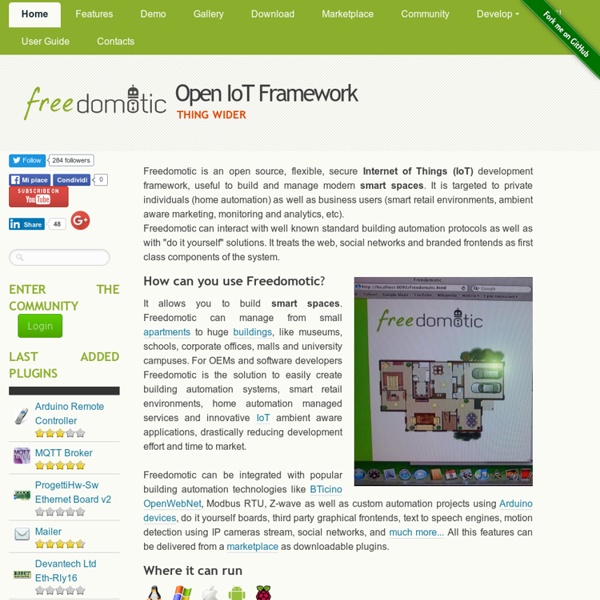 Freedomotic is an open , flexible , scalable and mashups oriented software that can interact with well known standard building automation protocols as long as with " do it yourself " solutions. It treats the web, social networks and frontends just like any other sensor or actuator in your automation system. For example you can twitt your washing machine to start the washing cycle. How you can use Freedomotic It can manage from small appartments to huge buildings , like museums and corporate offices. For OEMs and software developers Freedomotic is the solution to easily create building automation systems, managed services and innovative ambient aware applications , drastically reducing development effort and time to market .

LagartoMAX - panstamp - Documentation wiki and source code Lagarto-MAX is a lagarto process which receives, resends and processes events transmitted from any lagarto server running on the same IP network. Lagarto-MAX is a key piece into the lagarto architecture since it's able to integrate real values belonging to different networks and present them to the user in a homogeneous way. Moreover, being user-programmable, Lagarto-MAX can take decisions based on time or network events.

RPi Beginners Back to the Hub Getting Started: Buying Guide - for advice on buying the Raspberry Pi. SD Card Setup - for information on how to prepare the SD Card used to boot your Raspberry Pi. Basic Setup - for help with buying / selecting other hardware and setting it up. Beginners Guide - you are up and running, now what can you do? Uber Home Automation w/ Arduino & Pi A few years ago, I became a dog owner for the first time. I didn't like leaving Cody in the kennel alone all day. I had a webcam on him, but I couldn't watch it all day long. What if he was in some kind of distress? What if there was a emergency at the house, like a fire? I wanted some way of getting an immediate email notification when he barks, or when something bad happens. Gira HS3 server as alternative for openHAB or AyControl « Rick Centeno's Blog So two weeks ago I ran into a former colleague of mine who as it happened just had read my blog on the comparison of the different KNX solutions I tested, the openHAB server, the OpenRemote package and the ayControl solution. He was telling me that this blog was right for him at the right moment as he was looking for an appropriate solutions for his newly built house, only months away to become ready to move in. He asked me what I would choose in his place if I were to choose between those solutions. He was also very interested to find out whether I ever had a chance to look at the Gira HomeServer solution, which was the one he was eyeing. I told him that this Gira HS3 solution was a closed and expensive solution, contrary to the other ones that I tested, and that therefore I never had a chance to look at it.

Raspberry Pi + Webcam + Python + BASH + Dropbox = geek I recently acquired a Raspberry Pi and have been playing with it for some time. It amazes me how powerful can something so small and cheap be. We could say that the Raspberry Pi is just a really small computer without case (or fans). There are countless projects counting on the power, price and size of the Raspberry Pi, but I wanted to implement an easy one just to see what kind of things could be done. My goal was to set the Raspberry Pi with a Logitech Quickcam Express camera plugged in, to upload a picture to my Dropbox folder, whenever anyone in the world visited a website hosted in the same Raspberry Pi. Yes, I know, it’s useless, but let me enjoy, ok?

HomeVision Home Automation Controller Imagine controlling your entire home with a hand-held remote while watching TV. View a complete system interface on your TV screen. Or from a web browser anywhere in your home (or in the world). Host Your Own Website On Your Raspberry Pi Need to run a website but can’t afford the hosting costs? One way around this is with the Raspberry Pi, which is more than capable of running basic web server software. Best of all, setting it up is simple. Why Use A Raspberry Pi? We’ve previously looked at the – but who knew it could run as a web server? HomeSeer Announce HomeTroller Zee Z-Wave Home Automation Controller HomeSeer have announced a new smart home controller. The HomeTroller Zee is a Z-Wave enabled home automation gateway that’s accessible via free apps for Apple iOS and Android mobile devices. The tiny fan-less, disk-less controller runs embedded Linux and is extremely efficient sipping just 3 watts. Hardware specs include a 700 MHz CPU, 512 MB of RAM, 4 GB of storage (SD card), 2 USB Ports, an Ethernet LAN Port, HDMI, Composite Video and a 3.5mm audio out jack. It can control Z-Wave locks, thermostats, lights and sensors and it supports spoken announcements and reminders, plus customisable email and SMS text message Alerts. The device can be programmed via its web interface and is available with either US or European frequency with its Z-Wave coming from an included Aeon Labs Z-Stick plugged into one of its USB ports.

OpenHAB, AyControl and OpenRemote « Rick Centeno's Blog So last weekend I finally got the powersupply of my Ubuntu server fixed and was able to restart the eibd program that transforms the box into a KNX/IP router with tunneling capabilities. It is a pity that no one managed to port this code also to the Mac OSX, as this would make it even easier for me to run this eibd router on a Mac mini server stowed away in the electricity cabinet. That small OSX server is easier to handle in stowing away due to the small size and power economics than a full fletched Ubuntu server on a standard desktop. But who knows, maybe someday….someone…. Then I got a reply to one of my post on my OpenRemote experiences in which he pointed out to me that openHAB was going to be released and I needed to check that out. I checked the website, downloaded the runtimes and demo packages for R0.9.1 and looked at their demo pages on my Mac.