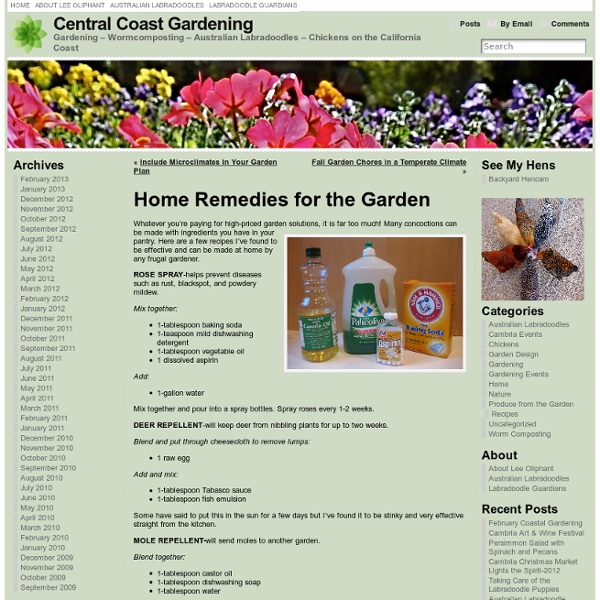 Whatever you’re paying for high-priced garden solutions, it is far too much! Many concoctions can be made with ingredients you have in your pantry. ROSE SPRAY-helps prevent diseases such as rust, blackspot, and powdery mildew. Mix together: 1-tablespoon baking soda1-teaspoon mild dishwashing detergent1-tablespoon vegetable oil1 dissolved aspirin Add: 1-gallon water Mix together and pour into a spray bottles. DEER REPELLENT-will keep deer from nibbling plants for up to two weeks. Blend and put through cheesecloth to remove lumps: 1 raw egg Add and mix: 1-tablespoon Tabasco sauce1-tablespoon fish emulsion Some have said to put this in the sun for a few days but I’ve found it to be stinky and very effective straight from the kitchen. MOLE REPELLENT-will send moles to another garden. Blend together: 1-tablespoon castor oil1-tablespoon dishwashing soap1-tablespoon water Mix with 2 gallons water and spray the ground where moles are uprooting your seedlings. Related:  Garden II • Gardening • Pest & Disease Control

Using Milk as a Natural, Homemade Pesticide - Organic Gardening Spraying your plants with milk won't drive bugs away from your garden, but the dairy product can be used to culture Bacillus thuriugiensis Berliner, a well-known bacterial pesticide sold under such brand names as Dipel, Thuricide and Biotrol. The agent is quite effective in controlling — among a number of insect problems — infestations of loopers, which are those pesky little worms (they're actually moth larvae) that attack broccoli, cabbage, cauliflower and other members of the cole family. Once eaten, the bacteria paralyze the larvae's intestinal tracts and bring about their death in two to four days.Before you spray your garden with thuringiensis, though, be aware that this bacterial-warfare weapon is fatal to the caterpillars of all Lepidoptera (an order of insects that includes many lovely, and relatively harmless, moths and butterflies) . . . so please don't employ the remedy in cases where simply handpicking the loopers off your plants will do the job. Using Milk as a Pesticide

7 Natural Uses For Baking Soda In The Garden Share Baking soda is a vital part of green cleaning and has so many uses in the house, but what about the garden. Here are 7 ways to use it in the garden. 1. Mix 4 teaspoons of baking soda and 1 gallon of water. 2. Powdery mildew is causing major problems with impatiens this year, but also can be a problem for other plants, like lilacs, cucumbers, squash and zinnias. Spray Recipe: 1 tablespoon of baking soda, 1 gallon of water, 1 tablespoon of vegetable oil, 1 tablespoon of dishwashing liquid Mix all the ingredients together and spray plants weekly. 3. Mix in 1 gallon of water, 4 teaspoons baking soda, 1 teaspoon biodegradable soap. 4. Pour or sweep baking soda in a thick layer into cracks on a sidewalk or patios. 5. Mix equals parts flour and baking soda and dust plants (cabbage, broccoli, kale) being eaten by cabbage worms. 6. Simply wet the crabgrass, pour a heavy dusting of baking soda on the weed. 7. Source: Plant Care Today

Step by Step – Make your own Permaculture No Dig raised bed | FOOD from the SKY Step by Step – Make your own Permaculture No Dig raised bed Posted by azulvaleriethome on December 12, 2012 · 19 Comments Raised Bed Workshop- Step by Step Using raised beds can be a great way to grow crops in small spaces. Building them involves less digging and soil disturbance than dug beds as organic matter is simple layered on top of the earth (usually mulched first with a thick layer of cardboard) and worms and micro organisms are encouraged to move up from below to break it down into lush soil. In this way you effectively create an extra layer of topsoil to grow your plants in and the raised edges give you a contained space where you can easily manage weeds and fertility. In soil-less environments such as the FFTS roof top, raised beds are essential. and without access to the microorganisms and nutrients found in the top soil that the beds usually sit on, we have to work hard to create a biologically rich and active environment that will support healthy plant growth. Jack Astbury

No dig growing |No dig gardening| www.charlesdowding.co.uk Many gardeners are discovering the benefits of growing healthy food without any soil cultivation. As well as saving the effort of digging, rotovating, 'forking through' or whatever, you will find that weeds eventually grow much less, that vegetables grow just as well, or better, and that soil sticks less to your boots - which may seem a small point but it makes a big difference to the pleasure of being out in the plot. This comment from Steve Jenkins in Lancaster reflects that: I attended Charles' one day course last September and even though I had been allotmenting for many years (or perhaps because) it was an inspiring and transformative experience. I completely changed the way I garden. I've just had my first complete year of no dig and, ok it's been a great growing year, but I've been double cropping, growing a far greater variety and balanced out some of the gluts for more of a flow of produce it has been fantastic, a revelation. There is rarely any need to double (or single!)

Use vinegar to kill weeds naturally and give Monsanto's Roundup the heave ho (NaturalNews) There's been lots written recently about the toxicity of Monsanto's poster child product Roundup, exposing how harmful it is for the earth and how poisonous it is on exposure for both animals and humans. However, what is not common knowledge to most organic gardeners and back yard enthusiasts is how they can manage weed control safely without the need for dangerous pesticides. Use vinegar to kill weeds naturally and safely, with no side effects to you, your pets, wildlife and mother earth. Vinegar is not choosy and cannot differentiate between broad-leaf weeds, narrow-leaf weeds, grass, flowers or vegetables. The best way to apply vinegar for weed control is with a spray bottle or pump sprayer. Spray or paint the vinegar on liberally to kill weeds naturally. Use vinegar to kill weeds before the weeds go to seed to prevent new weeds from growing. Sources for this article include: A Garden for the House: Got Weeds?

Best Shade-Tolerant Vegetables - Organic Gardening Even in shady conditions, you can bask in great garden harvests if you choose the right crops and make a few easy adjustments. By Colleen Vanderlinden When considering which crops to grow in shady areas, think of them in terms of leaves and roots. Crops we grow for their leaves (kale, lettuce, spinach) and those we grow for their roots (beets, carrots, turnips) will do fairly well in partially shady conditions. (The crops we grow for their fruits — such as eggplants, peppers and tomatoes — really do need at least six hours of full sun per day.) To learn more about how to grow crops in shady gardens, check out Best Vegetables to Grow in the Shade. The estimates in this chart are based on the experiences of the author and the experts mentioned in Best Vegetables to Grow in the Shade.

How to Grow Watercress Posted on 29 May 2011 by urbangardencasual.com Mindy McIntosh-Shetter Watercress is an herb that my daughter and I became very familiar with when she was younger. We always welcomed spring with a tea party that included our Sunday best clothes, dishes, and food. She would invite her friends over for this “formal” tea party. Several types of tea would be made along with finger food. When my daughter got older she wanted to grow her own watercress. Our project started by coming up with a container that would hold water. To begin the process required for growing watercress, first clean all containers with hot water and one cap full of bleach. Once the container has been removed, place into the next container that will hold the water. I then placed water into the watering can until the water level reached the top of the rocks. The seeds will germinate in 8 to 12 days and the watercress can be harvested in 60 days.