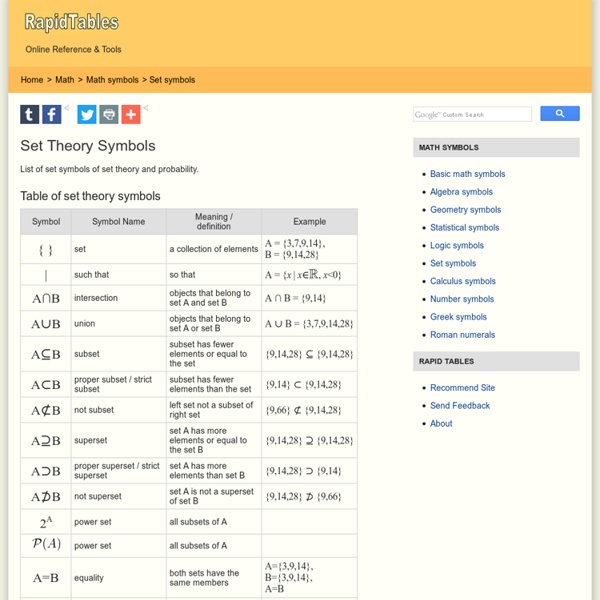 List of mathematical symbols When reading the list, it is important to recognize that a mathematical concept is independent of the symbol chosen to represent it. For many of the symbols below, the symbol is usually synonymous with the corresponding concept (ultimately an arbitrary choice made as a result of the cumulative history of mathematics), but in some situations a different convention may be used. For example, depending on context, the triple bar "≡" may represent congruence or a definition. Further, in mathematical logic, numerical equality is sometimes represented by "≡" instead of "=", with the latter representing equality of well-formed formulas. Each symbol is shown both in HTML, whose display depends on the browser's access to an appropriate font installed on the particular device, and in TeX, as an image. Guide[edit] This list is organized by symbol type and is intended to facilitate finding an unfamiliar symbol by its visual appearance. Basic symbols[edit] Symbols based on equality[edit] Brackets[edit]

HP CALCULATOR HISTORY - HP-67 Introduced on July 1 1976 with the codename "Hawkeye", together with the HP-25C and the HP-97, this was essentially an upgraded HP-65. The competition were catching up and HP had to overtake them (did the codename mean that HP were keeping a sharp lookout for the opposition?), so the HP-67 improved on the HP-65 with new functions, more memory, and the ability to store data as well as programs on magnetic cards. One interesting extra was a second set of ten registers, called the "secondary storage registers". Another interesting extra was "rapid reverse branching" - in addition to going directly to program labels, the calculator allowed indirect GOTO commands, via an intermediate register "I", and if "I" contained a negative number then the program would jump backwards by that number of program steps. The HP-67 had so many functions that the designers added a third shift key, in black marked h to the yellow and blue f and g shift keys already used by the HP-65.