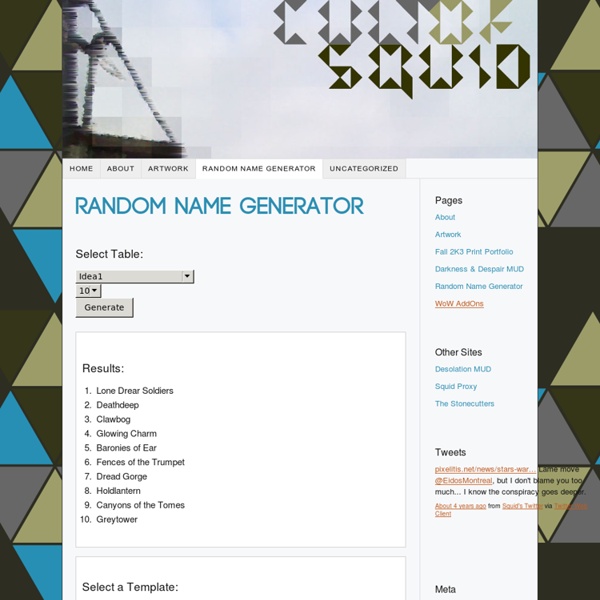 Results: Lone Drear SoldiersDeathdeepClawbogGlowing CharmBaronies of EarFences of the TrumpetDread GorgeHoldlanternCanyons of the TomesGreytower Instructions: Select a template from the drop down list, select the number of times you want to run the generator, and hit “Go” to create a random list of ideas, people and place names. Alternatively, you can pick from the list lower on the page instead of using the drop down select. About: This PHP application draws from many sources.

Place Name Generators Place Name Generators While I’m at it, here are some place name generators. Largely I use the Ever-changing Book of Names , if I can’t come up with something on my own, but this is a handy set of online resources. Fantasy Place Name Generator for RPG players and authors Naming Your Geographical Features This name generator generates names for geographical features, town names and village names. Names vary from the amost normal to the downright bizarre. Fantasy Name Generator By Samuel Stoddard - Version 1.5 One of the perks of creating fantasy stories -- whether by writing a story or game or by role-playing -- is you get to make up the names. Some people relish the task while others are frustrated by it. Some like it but can't seem to create names that are diverse enough.

List of Latin place names in Asia This list includes Asian countries and regions that were part of the Roman Empire, or that were given Latin place names in historical references. Background[edit] Until the Modern Era, Latin was the common language for scholarship and mapmaking. During the 19th and 20th centuries, German scholars in particular have made significant contributions to the study of historical place names, or Ortsnamenkunde. These studies have, in turn, contributed to the study of genealogy. For genealogists and historians of pre-Modern Europe, knowing alternate names of places is vital to extracting information from both public and private records.

25 Ways To Plot, Plan and Prep Your Story I’m a panster at heart, plotter by necessity — and I always advocate learning how to plot and plan because inevitably someone on the business side of things is going to poke you with a pointy stick and say, “I want this.” Thus you will demonstrate your talent. Even so, in choosing to plot on your own, you aren’t limited to a single path.

Springhole List of Latin place names in Continental Europe, Ireland and Scandinavia This list includes European countries and regions that were part of the Roman Empire , or that were given Latin place names in historical references . As a large portion of the latter were only created during the Middle Ages , often based on scholarly etiology , this is not to be confused with a list of the actual names modern regions and settlements bore during the classical era . Background [ edit ] Random Generators! - LOTS Run out of ideas for your latest novel or roleplaying game? Has your writing or artistic muse abandoned you? Does your creativity just need a kick in the pants? You've come to the right place - with the click of a button, new ideas are yours for the taking.

Story Starters Looking for story starters and creative writing ideas? You've just struck gold. Here you'll find an endless supply of inspiration. Bye-bye, Writer's Block. Take a moment to bookmark this page so that you can find it again whenever you need new ideas. Also be sure to check out our free 3-day online creative writing course, Endless Story Ideas, which will show you techniques to come up with new fiction ideas whenever you need them. Inspiration Pad Online List of adjectival and demonymic forms of place names The following is a partial list of adjectival forms of place names in English and their demonymic equivalents , which denote the people or the inhabitants of these places. Note: Demonyms are given in plural forms. Singular forms simply remove the final 's' or, in the case of -ese endings, are the same as the plural forms.

Creative Writing Topics and Short Story Ideas Here are lots of creative writing topics to give you ideas for your own stories and novels. If you are taking one of our free online writing courses, these fiction writing prompts are especially recommended for the sections on plot structure and story climax. At the bottom of the page, you'll find a links to browse more story prompts, plus the chance to take a free writing course. Do you like this page? Please click the +1 button to recommend it. Creative writing topics - story starters with a focus on: plot structure and story climax.