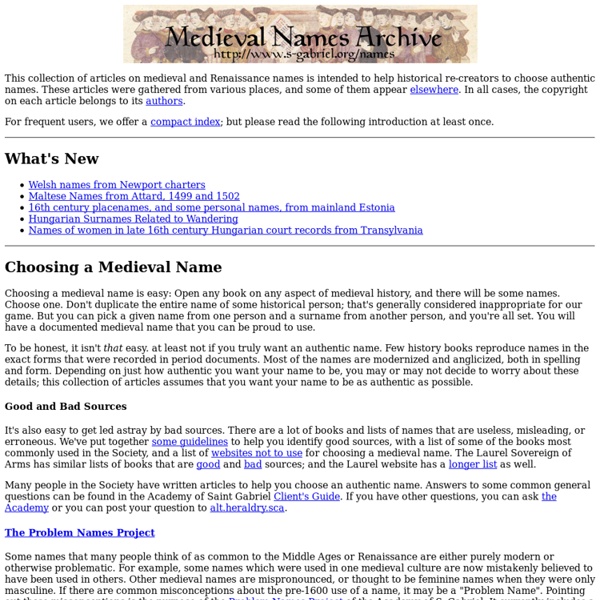 This collection of articles on medieval and Renaissance names is intended to help historical re-creators to choose authentic names. These articles were gathered from various places, and some of them appear elsewhere. In all cases, the copyright on each article belongs to its authors. For frequent users, we offer a compact index; but please read the following introduction at least once. What's New Choosing a Medieval Name Choosing a medieval name is easy: Open any book on any aspect of medieval history, and there will be some names. To be honest, it isn't that easy. at least not if you truly want an authentic name. Good and Bad Sources It's also easy to get led astray by bad sources. Many people in the Society have written articles to help you choose an authentic name. The Problem Names Project Some names that many people think of as common to the Middle Ages or Renaissance are either purely modern or otherwise problematic. You can help! Table of Contents Personal Names in Specific Cultures Related:  History

Marco Polo - Exploration Two years later, Niccolò and Maffeo sailed to Acre in present-day Israel, this time with Marco at their side. At the request of Kublai Khan, they secured some holy oil from the Church of the Holy Sepulchre in Jerusalem and then backtracked to Acre to pick up gifts, papal documents and two friars from newly elected Pope Gregory X. The friars quickly abandoned the expedition, but the Polos continued on, possibly by camel, to the Persian port city of Hormuz. Kublai, who generally relied on foreigners to administer his empire, took Marco Polo into his court, possibly as a tax collector. After many years of seeking a release from service, the Polos finally secured permission from Kublai to escort a young princess to her intended husband Arghun, the Mongol ruler of Persia.

KateMonk This is a collection of names from around the world which was initially intended to help provide character names for live role-players. It includes short historical backgrounds, male and female first names or personal names, and surnames or family names, from many countries and periods. The author is not an expert in onomastics or history so would like to apologise if any mistakes have been made. All names included are from genuine sources to the best of her knowledge, but this is not an academic study and should not be relied upon by re-enactment societies which require specific dates and instances of occurrence for the names they use. New webmaster's note: This onomastikon was compiled by Kate Monk and hosted by Sal Robertson at gaminggeeks.org.

Water Cures in Ancient China Water Cures in Ancient China Water is the source of every thing on earth, and traditional Chinese medicine (TCM) uses it as an important ingredient for healing. The well-known pharmacopoeia, the Bencao Gangmu (Compendium of Materia Medica), has classified water into different types, as the ancient Chinese held that water could exert diverse effects according to its source, for example: The tradition of water cures occurs in many cultures. It is well accepted that bathing can be a remedy for healing or health maintenance. In Chinese culture, baths are not just for sanitary reasons but also an integral part of rituals.

A History of Irish Surnames: Is Yours Here? – Ancestry Blog The earliest known Irish surname is O’Clery (O Cleirigh); it’s the earliest known because it was written that the lord of Aidhne, Tigherneach Ua Cleirigh, died in County Galway back in the year 916 A.D. In fact, that Irish name may actually be the earliest surname recorded in all of Europe. Until about the 10th century in Ireland, surnames were not passed down from generation to generation. Instead, surnames were patronymic, or based on someone’s father’s name. A person was identified by his given name plus “mac,” meaning “son of,” followed by his father’s name. For instance, Brian mac Colum was Brian, son of Colum. The female form of “mac” is “nic,” shortened from the Irish iníon mhic. Alternatively, the prefix “o” was sometimes used in place of “mac” and meant “grandson of” or “descended from.” There were no fixed surnames, so a surname changed every generation or two. But even without hereditary surnames, those names still hold clues. 1. 2. 3. 4. 5. 6. 7. 8. 9. 10. — Leslie Lang

Religion and gods in ancient Egypt Religion governed life at all levels of Egyptian society. Ancient Egyptian coffin painted with winged serpent Photographer: © Australian Museum From natural forces like the rise and fall of the Nile and the passage of the sun, to death, healing, childbirth and prosperity – all were inseparable from gods and magic. Religion Throughout Egypt's history beliefs and practices were constantly changing though the themes of fertility, rebirth, death and resurrection generally remained constant. The ancient Egyptians had a tendency to merge new beliefs with the old ones rather than simply replace them. Gods We know of hundreds of gods and goddesses worshipped by the ancient Egyptians as their names, personalities and appearances have survived in the artwork the civilisation left behind. Local areas had local gods, with each city or region often having their own deities that they worshipped. Anubis was the jackal-headed god of embalming and mummification and the patron god of embalmers.

Babylonian Names The Akkadians The Akkadians lived in northern Babylonia and spoke a Semitic language. Their main city was Akkad or Akkade (Sumerian Akkede or Agade). Sargon, who lived between 2469 and 2242 B.C., is credited with founding the city of Akkade and of founding the first major empire in the region. Power then passed to the people of the southern city of Ur. The Babylonians Around 1900 B.C. the city of Babylon became a major power under the Amorites. Female Names Adeeshuduggaat (S) Ahassunu (3) Ahati-waqrat - a slave (3) Ahatsunu (N) Alittum (3) Amata (N) Anagalmeshshu (S) Anagalshu (S) Arahunaa (S) Arwia (3) Ashlultum - A queen of Sargon. Banunu (N) Belessunu (3) Beletsunu (N) Enheduana - Daughter of Sargon, high priestess of Ur and early poet, who wrote in Sumerian. Gashansunu (S) Gemegishkirihallat (S) Gemekaa (S) Gemeti (S) Humusi (3) Ia (S) Iltani (3) Ishtar-gamelat (3) Ku-Aya (3) Ku-Baba - A tavern hostess who usurped the throne in Kish only a short time before the "Dynasty of Akkad". Or Asia

Ancient Egyptian Soldiers - Warriors of Pharaoh Ancient Egyptian soldiers were the main ingredient of what made ancient Egypt a great civilization. The military might of ancient Egypt was what translated the Pharaoh's ideas and tactics into a reality. It is also what kept ancient Egypt continuous for over 3,000 years. This temporary army only lasted for as long as the campaign was alive, and then dispersed once it was done. The young men would go back to their old jobs and villages. Once it was seen how much of an advantage having a permanent army would be, it was set up in the New Kingdom and the career of a soldier was created. So there were now 2 ways to be part of the army: National Service - You could just join as an adult recruit to train/serve for a year or two, with the possibility of being called back to serve any time after that.Military Career - You were signed up as a child to serve in the army your whole life. Some military men rose to such great power as to become kings themselves... Ancient Egyptian Military Training

Ancient Egyptian Women - Their Rights and Daily Life Ancient Egyptian women had a lot of rights that other women of the ancient world did not. In fact, compared to women of someparts of the world today, they are considered quite lucky! Still, they were not equal to men of the same social rank and were subjected to a stricter existence. Of course their lives, compared to modern standards, were much more difficult. Egyptian girls married young (age 10) and spent the majority of their days in housekeeping, child bearing, nursing, and child rearing. The Mistress An ancient Egyptian household could have over 15 people in it, and so house work was quite the task. This is actually still the case for some women in Egypt these days. Even though the man of the house reigned supreme, his wife usually was the main household administrator. She was given the title of "Mistress of the House." She either had to carry out most of the household chores herself, or had to supervise the servants who did. The Working Girl Ancient Egyptian Women's Material Assets

Ancient Egypt: Clothing Laundering They wear linen garments, which they are specially careful to have always fresh washed. Herodotus, Euterpe, 2.37.1 Cleanliness was apparently next to godliness in ancient Egypt. And who was closer to the gods than the pharaohs themselves. Since earliest historic times the titles of "chief washer of the palace" and "washer to the pharaoh" are known, and keeping the royal clothes lily white was the duty of the "chief bleacher The washerman launders at the riverbank in the vicinity of the crocodile. In the eyes of Kheti at least, washing women's clothing was not really work a man should be doing. He cleans the clothes of a woman in menstruation. Mending Before the advent of industrial production techniques, cheap overseas transportation and a Third World population with little choice but to work for peanuts, clothes made up a considerable part of one's living expenses. and sometimes decorative gloves as well, but generally they were depicted barefoot, as were the gods.

Teotihuacán's Social Tensions Contributed to Its Fall Teotihuacán in central Mexico is an archaeological site, a cultural landmark and a tourist attraction, best known for its pyramids and plaza. But nearly 2,000 years ago, it was a powerful urban center, home to more than 150,000 people. It was also one of the best planned and most diverse of such preindustrial cities—because migrants of different ethnicities streamed in following the eruptions of two volcanoes in southern Mexico that made their own homes less desirable. Now researchers have developed methodology to study the remains of one multiethnic neighborhood, using paleopathology, nutritional status and DNA, along with other techniques. Study author Linda Manzanilla of the Universidad Nacional Autónoma de México also points out that the city’s rulers controlled the flow of all raw materials coming in to Teotihuacán. —Cynthia Graber [The above text is a transcript of this podcast.]