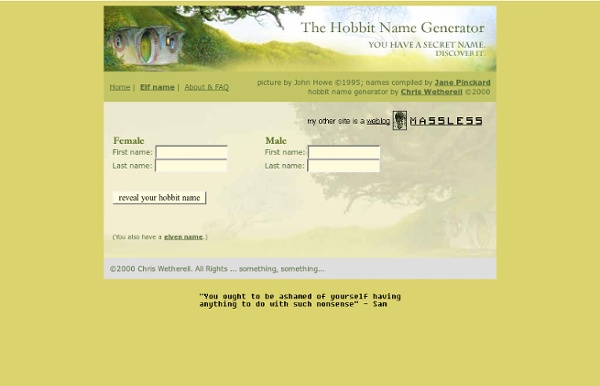 The Lord of the Rings by JRR Tolkien reviewed on Fantasy Book Review Reader reviews Have Your Say Andrew Luck from USA Started the book and it is great. Owl Owls hunt mostly small mammals, insects, and other birds, although a few species specialize in hunting fish. They are found in all regions of the Earth except Antarctica and some remote islands. Anatomy[edit]

64 Things Every Geek Should Know - laptoplogic.com The term ‘geek’, once used to label a circus freak, has morphed in meaning over the years. What was once an unusual profession transferred into a word indicating social awkwardness. As time has gone on, the word has yet again morphed to indicate a new type of individual: someone who is obsessive over one (or more) particular subjects, whether it be science, photography, electronics, computers, media, or any other field. A geek is one who isn’t satisfied knowing only the surface facts, but instead has a visceral desire to learn everything possible about a particular subject. The Fountain Avenue Kitchen – Orange Vinegar (a “green” cleaner) Household chores will likely be cast off in favor of egg hunts and family get-togethers this weekend, and that’s a good thing. Happy Easter! The arrival of spring, however, is known as much for bunnies and daffodils as it is for thorough cleanings.

J. R. R. Tolkien John Ronald Reuel Tolkien, CBE (/ˈtɒlkiːn/ TOL-keen;[a] 3 January 1892 – 2 September 1973) was an English writer, poet, philologist, and university professor, best known as the author of the classic high fantasy works The Hobbit, The Lord of the Rings, and The Silmarillion. He served as the Rawlinson and Bosworth Professor of Anglo-Saxon and Fellow of Pembroke College, Oxford, from 1925 to 1945 and Merton Professor of English Language and Literature and Fellow of Merton College, Oxford from 1945 to 1959.[1] He was at one time a close friend of C. S. Bird of prey Birds of prey, also known as raptors, hunt and feed on other animals. The term "raptor" is derived from the Latin word rapere (meaning to seize or take by force).[1] These birds are characterized by keen vision that allows them to detect prey during flight and powerful talons and beaks. In most cases, the females are larger than the males. Because of their predatory nature, they face distinct conservation concerns.

Realistic Lateral Thinking Puzzles Lateral Thinking Puzzles, unlike most puzzles, are inexact. In a sense, they are a hybrid between puzzles and storytelling. In each puzzle, some clues to a scenario are given, but the clues don't tell the full story. Your job is to fill in the details and complete the story. 10 Simple Things to Make You Happier At Home Our homes are an extension of who we are: what we do within the walls of our abodes shapes our mood, affects our productivity, and influences our outlook on life. Scientific studies have shown that we can have an impact on our happiness by adjusting the tiny little habits and routines that constitute our daily lives — we are, in fact, in control of our outlook on life. It's amazing how a few tweaks to our daily habits can become a catalyst for meaningful, positive change. Here are a few simple things you can do every day to feel happier at home. 1. Make your bed.

Rohan Rohan was the territory of the Rohirrim, a people of herdsmen and farmers on the northern borders of Gondor in Middle-earth. Well-known for their horses and cavalry, they were Gondor's most important ally. [edit] Background In the 1200s of the Third Age, the Kings of Gondor made close alliances with the Northmen of Rhovanion, a people akin to the Three Houses of the Edain (later the Dúnedain) from the First Age.

Bee Bees are flying insects closely related to wasps and ants, and are known for their role in pollination and for producing honey and beeswax. Bees are a monophyletic lineage within the superfamily Apoidea, presently classified by the unranked taxon name Anthophila. There are nearly 20,000 known species of bees in seven to nine recognized families,[1] though many are undescribed and the actual number is probably higher.