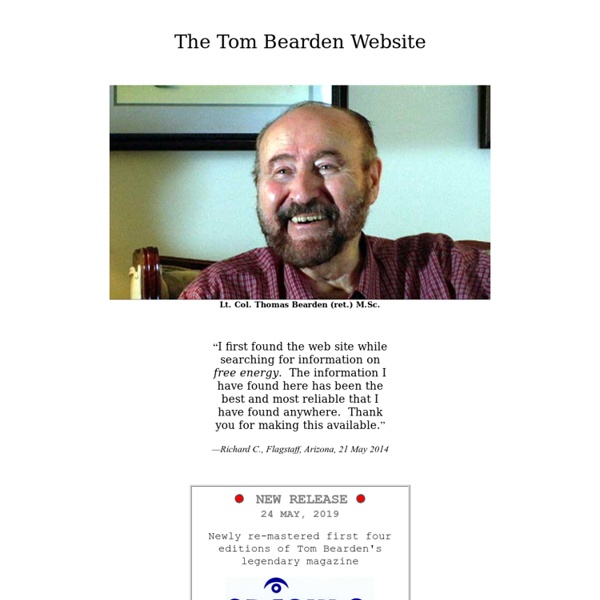 New expanded 2nd Edition of Bearden-Bedini book released Read the reviews The Motionless Electromagnetic Generator (MEG) Has produced up to 100 times more power than was input, by extracting free energy from the vacuum. The MEG has been independently constructed, and its overunity performance independently replicated, by other researchers. US Patent awarded March 26, 2002.

Dr Paul LaViolette - Secret Space Program Dr. LaViolette is the first to predict that high intensity volleys of cosmic ray particles travel directly to our planet from distant sources in our Galaxy, a phenomenon now confirmed by scientific data. He is also the first to discover high concentrations of cosmic dust in Ice Age polar ice, indicating the occurrence of a global cosmic catastrophe in ancient times. Based on this work, he made predictions about the entry of interstellar dust into the solar system ten years before its confirmation in 1993 by data from the Ulysses spacecraft and by radar observations from New Zealand.

Free Energy - Iceweasel The World of Free Energy By Peter Lindemann, D.Sc. For a two-page summary of this 10-page essay on free energy, click here In the late 1880's, trade journals in the electrical sciences were predicting free electricity and free energy in the near future. Incredible discoveries about the nature of electricity were becoming common place. When you were born your government forged your name and created a Birth Certificate Bond. Posted by PRESS Core Corruption, World news Friday, May 4th, 2012 Prior to the 17th century most money was commodity money, typically gold or silver. As the first public bank to “offer accounts not directly convertible to coin”, the Bank of Amsterdam established in 1609 is considered to be the first central bank. Since then central banks and their international bankers have replaced real value gold and silver with worthless debt creating imitation (counterfeit) currency. It was this printing of this counterfeit money that forced both the USA and Canada into bankruptcy. The US Central Bank called the Federal Reserve Bank forced the USA into bankruptcy in 1933 and Canada soon after.

Fuel-free engine that breaks laws of physics could make Star Wars space travel a reality A fuel-free engine has scientists bamboozled, as it appears to violate the known laws of physics. The device could transport humans to Mars in as little as ten weeks, making deep space travel, as portrayed in Star Wars, a potential reality. The EM Drive is powered by the sun; meaning, the engine doesn’t require fuel to produce a reaction. It generates thrust by bouncing microwaves around in an enclosed chamber. Since it doesn’t require fuel, the craft is substantially lighter and easier to move. electricity - carusomb - Iceweasel I. Static Electricity A. History of Static Electricity 1. When the pieces of amber were rubbed with silk they would repel each other. How Cancer Taught Me to Cook… – CureHealth There are some moments in life you’ll always remember. Maybe it’s the day you learned to ride a bike. Or when that special someone said “I love you.” Maybe it was the moment you realized there are no guarantees in life. Receiving a cancer diagnosis is undoubtedly one of those moments. Time seems to stand still as you hear the words you either feared or never expected to hear.

25 Facts That The Mainstream Media Doesn't Really Want To Talk About For decades, the mainstream media in the United States was accustomed to being able to tell the American people what to think. Unfortunately for them, a whole lot of Americans are starting to break free from that paradigm and think for themselves. A Gallup survey from earlier this year found that 60 percent of all Americans “have little or no trust” in the mainstream media.

Groundbreaking Discovery: Man Solves Tesla’s Secret To Amplifying Power By Nearly 5000% Jim Murray has been electrifying the world for over 50 years. His lifetime of experience has produced dozens of patents, inventions and now a truly remarkable discovery that can fundamentally change the way that human beings use energy forever. When he was just five years old, Jim tells the Free Thought Project that he had already developed an affinity for motors and electricity. This curiosity was piqued by his father’s model train sets which Jim spent hours tinkering with. His natural gift and childhood passion fostered the creation of his first electromagnet when he was only six years old.