Write Your Name in Elvish in Ten Minutes 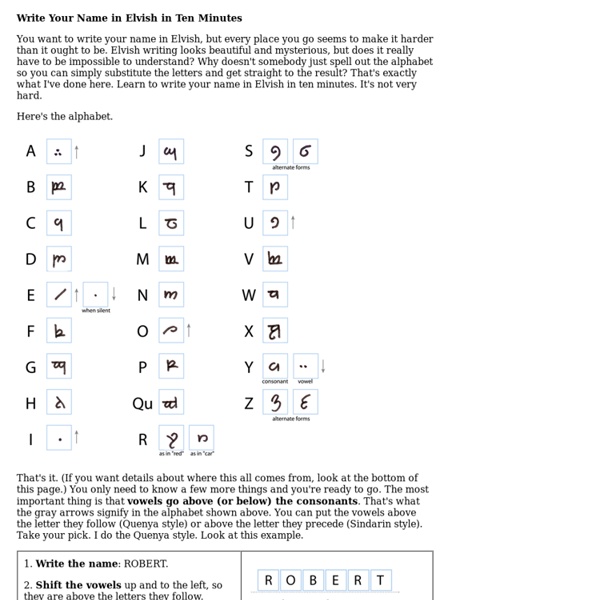 Write Your Name in Elvish in Ten Minutes You want to write your name in Elvish, but every place you go seems to make it harder than it ought to be. Elvish writing looks beautiful and mysterious, but does it really have to be impossible to understand? Why doesn't somebody just spell out the alphabet so you can simply substitute the letters and get straight to the result? That's exactly what I've done here. Learn to write your name in Elvish in ten minutes. Here's the alphabet. That's it. Generally the vowels go above the consonants, but sometimes, in the case of Y and silent E, they go below. The straight line underneath is just one way to make one character do the work of two. The line above a consonant means that a nasal N or M precedes the consonant in question. Here's one last example with two different letter combinations. I am often asked how to handle double vowel situations. That's all you need to get started. Good luck! Ned Gulley Want an Elvish tattoo? Want an Elvish t-shirt?

typing lessons This is keybr.com, a web application that will help you teach touch typing. Touch typing is typing without using the sense of sight to find the keys. A person possessing touch typing skills will know their location on the keyboard through muscle memory. It can improve any individual's typing speed and accuracy dramatically.

Thermal Physics Jokes As we all know, it takes 1 calorie to heat 1 gram of water 1 degree centigrade. Translated into meaningful terms, this means that if you eat a very cold dessert (generally consisting of water in large part), the natural processes which raise the consumed dessert to body temperature during the digestive cycle literally sucks the calories out of the only available source, your body fat. For example, a dessert served and eaten at near 0 degrees C (32.2 deg. List of French words and phrases used by English speakers Here are some examples of French words and phrases used by English speakers. English contains many words of French origin, such as art, competition, force, machine, police, publicity, role, routine, table, and many other anglicized French words. These are pronounced according to English rules of phonology, rather than French. Around 28% of English vocabulary is of French or Oïl language origin, most derived from, or transmitted by, the Anglo-Norman spoken by the upper classes in England for several hundred years after the Norman Conquest, before the language settled into what became Modern English. This article, however, covers words and phrases that generally entered the lexicon later, as through literature, the arts, diplomacy, and other cultural exchanges not involving conquests.

publish a book? If you've never truly considered writing a book, take another look at the rubbish filling bookshelves at airport kiosks. The "authors" of that stuff are laughing all the way to the bank. While English majors and real literary types are screaming at each other in the stuffy halls of academia or the pages of The New Yorker, these clowns are quietly rehashing tired plots and making millions for it. You're a smart person, so we see no reason you shouldn't take a crack at making bank as well.

Yet Another Alcohol Stove Alcohol stoves are inexpensive, lightweight alternatives to commercial backpacking stoves. They are used primarily for boiling water to rehydrate dehydrated meals. If your camp cooking is more complicated than that, or if you need to cook for more than 1 person, this stove may not be for you. In my quest for the perfect alcohol stove, I have experimented with several designs. Cake postcard tutorial Supplies Materials needed to make two cake postcards: 1 large sponge (yellow paints the best)Serrated knifeX-Acto or utility knifeSpray paint (brown, yellow, pink or white)1 tube acrylic latex caulk (brown, cream or white)Spray adhesive (3M Super 77 works great!)Cardboard, kraft paper or scrapbook paper

Engineers A math/engineering convention was being held. On the train to the convention, there were a bunch of math majors and a bunch of engineering majors. Each of the math majors had his/her train ticket. The group of engineers had only ONE ticket for all of them. The math majors started laughing and snickering. French Swear Words: My 10 Favorites by Julie Blakley | March 4th, 2011 For those who learned French in the classroom, I’m guessing the teacher was not willing (or able) to teach students how to properly and thoroughly cuss in French. So, in that vein, here are some of my very favorite French curses. These are the things you hear spilling out of cab driver’s mouths, accidentally being shouted by a grandmother when she drops the milk, or accompanied by grimaced faces and occasional hand gestures in the streets of Paris. Now, before you go around dropping the French equivalent of the F bomb on your next trip, keep in mind that language plays an immensely important role in French culture.

Grammar natzi The five stages of incessant pop music. Goats on a roof. How I feel standing vs sitting. 20 Common Grammar Mistakes That (Almost) Everyone Gets Wrong I’ve edited a monthly magazine for more than six years, and it’s a job that’s come with more frustration than reward. If there’s one thing I am grateful for — and it sure isn’t the pay — it’s that my work has allowed endless time to hone my craft to Louis Skolnick levels of grammar geekery. As someone who slings red ink for a living, let me tell you: grammar is an ultra-micro component in the larger picture; it lies somewhere in the final steps of the editing trail; and as such it’s an overrated quasi-irrelevancy in the creative process, perpetuated into importance primarily by bitter nerds who accumulate tweed jackets and crippling inferiority complexes.