100 little things that travel has taught me 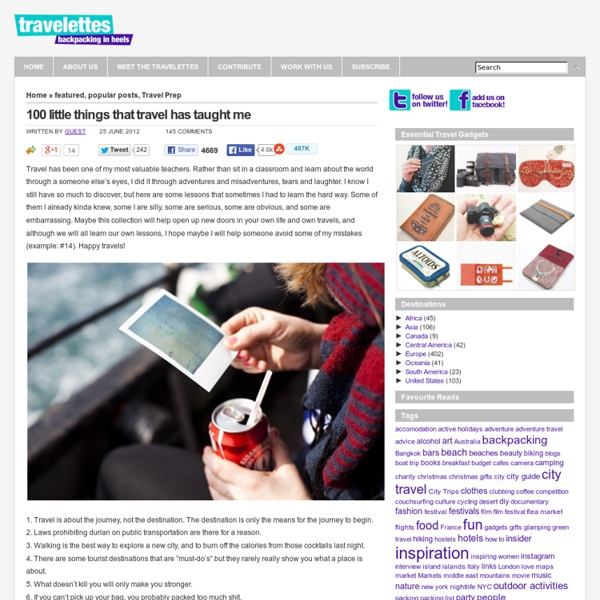 Travel has been one of my most valuable teachers. Rather than sit in a classroom and learn about the world through a someone else’s eyes, I did it through adventures and misadventures, tears and laughter. I know I still have so much to discover, but here are some lessons that sometimes I had to learn the hard way. Some of them I already kinda knew, some I are silly, some are serious, some are obvious, and some are embarrassing. Maybe this collection will help open up new doors in your own life and own travels, and although we will all learn our own lessons, I hope maybe I will help someone avoid some of my mistakes (example: #14). Happy travels! 1. 21. 28. 43. 60. 80. 95. What are some lessons you have learned from travel? photo credits: katja hentschel: polaroid, laptop, insects, waterfall girl; mrsdkrebs: tattoo map, littlelakes: coconut, fmgbains: flowers, all others: author’s own * post written by Kyra Bramble.

60 of the world's happiest facts 1. A group of flamingos is called a flamboyance. 2. If you fake laugh long enough you’ll start to really laugh, really, really hard. 3. The Good Guy Contract Twenty years ago, the first woman I ever loved broke my heart. Like many break ups, the end came in stutters and sine waves rather than as an abrupt but mercifully irreversible amputation. However, for reasons I couldn't understand yet quickly began to resent, my ex-girlfriend continued to ask favors of me. And I continued to grant them. Then one morning while chanting I found myself ruminating about how inappropriate it was of her to keep asking, and the more I thought about it, the more irritated I became. My indignation continued to intensify after I'd finished chanting and began showering, finally reaching a peak as I rinsed the shampoo from my hair, causing me to make a sudden and angry determination that the next time she asked me for a favor, I'd refuse.

List of common misconceptions From Wikipedia, the free encyclopedia This incomplete list is not intended to be exhaustive. This list corrects erroneous beliefs that are currently widely held about notable topics. Dangers of traveling while female When I was younger, I wanted to travel like Patrick Leigh Fermor, who famously spent 1934 walking from the Hook of Holland to Istanbul. I envisioned myself sporting leather satchels and lace-up boots, doffing Panama hats, spouting demotic Greek. I fantasized about riding horses through the Caucasus and letting falcons loose upon the Black Sea, about “living up in the mountains, dressed as a shepherd,” as Fermor had done. It was a fantasy cobbled together from all the books of all the travel writers I loved — the great writer-scholars of a certain generation, who saw the whole world as raw material: shifting, uncertain geography for them to shape and create anew in their words. Then I turned 15, and traveled alone for the first time to Paris, a city I had once lived in, and which I knew well. I laid out maps.

Top 10 Apps, Sites, And Guides For Sustainable Travel Inspirations I’ve always really loved road trips, but really hated the food on the road (with the exception of an In-N-Out Double-Double). A bad burrito is such a buzzkill. So, I was beyond thrilled when my partners at SHFT launched their amazing new app: Food Tripping. This is the app that that shows you where all the farmers’ markets, juice bars, artisanal shops/bakeries, and even micro-breweries are located. On my latest road trip (albeit a short one) from L.A. to Palm Springs, I had a serious craving for a smoothie but couldn’t remember the place that I had been months before. Food Tripping had me at the best date smoothie shop ever. Home Dream Home - Part 4 Turn these ideas into reality and transform your house into a home. For more inspiration check our previous collection.

100 Ways to Kickstart Your Brain On a Lazy Day By Olivia Coleman Everyone has those days at school or work when your brain is moving just a little slower than usual. If you find yourself up against a lazy day, give one of these tricks a try to get your brain going. With suggestions on brain-boosting foods and drinks, games, trivia, exercise and fun strategies, you are sure to find a way to wake up your brain from the list below. Brain-Boosting Drinks National Geographic Photo Contest 2011 - Alan Taylor National Geographic is currently holding its annual photo contest, with the deadline for submissions coming up on November 30. For the past nine weeks, the society has been gathering and presenting galleries of submissions, encouraging readers to vote for them as well. National Geographic was kind enough to let me choose among its entries from 2011 for display here on In Focus. Gathered below are 45 images from the three categories of People, Places, and Nature, with captions written by the individual photographers. [45 photos] Use j/k keys or ←/→ to navigate Choose:

The Ultimate Guide to Traveling When You're Broke By Matthew Kepnes Think you don’t have enough money to travel? Think again. Travel guru Matt Kepnes puts that myth to rest with this guide to traveling on little (or no) money. I recently asked subscribers of my newsletter about the number one thing that holds them back from traveling.