Myths and Legends from E2BN 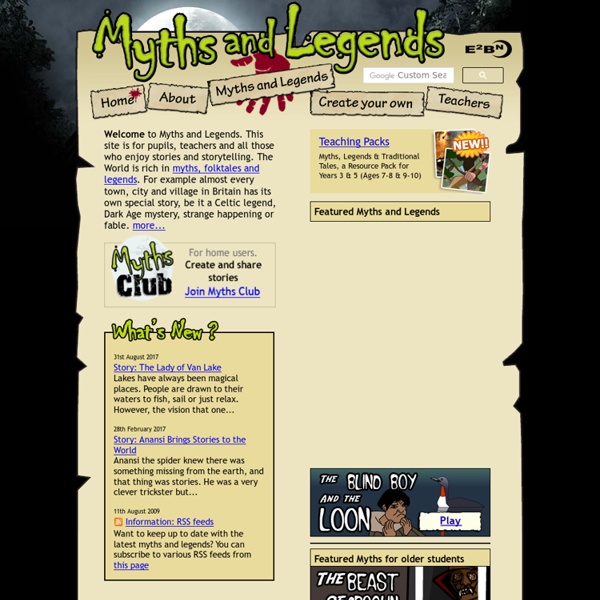 Explore Grecian Lore and Legend with this Informative Teacher's Guide! Valuable aspects of any literary work are its themes, symbols, and motifs. Part of the Common Core ELA standards is to introduce and explain these complex concepts. However, abstract ideas are often difficult for students to anatomize without assistance.

CrazyTalk - Facial and 2D Animation Software Talking-head Character Animation! CrazyTalk7 is the most popular facial animation tool that uses sound and text to vividly animate facial images. With this groundbreaking Auto Motion technology, you just need to import images, specify the facial feature points and record your own voice as it automatically generates lip-syncs to create 3D life-like, talking videos. Top 10 Irish Myths and Legends Ireland’s long history is riddled with ancient mythology and folklore. Ireland’s ancient societies, the Druids and the Celtics, believed in the power of magic and many of these beliefs spread to modern day legends told again3 and again across the country. Stories of warriors with all the knowledge of the world, fairies playing pranks on farm owners and leprechauns hiding their gold at the end of a rainbow add to the mysterious appeal of Ireland. 10.

BBC Religion & Ethics - Did the Romans invent Christmas? 17 December 2012Last updated at 09:31 The ruins of the Temple of Saturn still dominate the west end of the Forum in Rome "Io Saturnalia!" Global storytelling with a green screen and iPads These 6th graders found a way to do some digital global storytelling with a green screen and their iPads. They also managed to bust Tellagami’s animated personas out of the tablet, sending them around the world with a little green-screen magic. At Edmunds Middle School, two classes of 6th graders embarked on a new form of storytelling: Tellagami-smash! With a fleet of iPads at their disposal, along with the free green-screen app Veescope, students transported themselves or characters made with the Tellagami app to locations around the world. According to educators Laura Botte and Katie Wyndorf: The scholars have created a series of movies and books that demonstrate their learning.

Little Red Riding Hood All around the world children love listening to and reading fairy tales in their mother tongue. Whatever the reason, fairy tales provide both children and teachers with a familiar starting point from which to explore stories in a second language. This kit contains a variety of resources, from text and tasks to illustrations, flashcards and presentations, for you to download and use in your classroom. You can also find online and printable materials for learners on the British Council's LearnEnglish Kids website. Activities – a collection of activities related to the story

Ogham in 3D Ogham stones are among Ireland's most remarkable national treasures. These perpendicular cut stones bear inscriptions in the uniquely Irish Ogham alphabet, using a system of notches and horizontal or diagonal lines/scores to represent the sounds of an early form of the Irish language. The stones are inscribed with the names of prominent people and sometimes tribal affiliation or geographical areas. These inscriptions constitute the earliest recorded form of Irish and, as our earliest written records dating back at least as far as the 5th century AD, are a significant resource for historians, as well as linguists and archaeologists. Presentation Download Video Fairy Tales Gone Wild: 10 Creative Ways to Teach Fairy Tales Fractured fairy tales are a great way to help students see how story elements—like character, plot, setting—shape the stories we read and write. What do we call it when an author takes a classic fairy tale and changes it into something completely different? It's called a fractured fairy tale. And kids love them. "It's by far my students' favorite language arts unit every year," writes teacher Jessie Averson, a second grade teacher in Tennessee.

#LaunchpadEDU - Playful Resources For Your Classroom We use Toontastic to improve students’ reading comprehension by creating animated summaries of the stories they read. It helps them retell, paraphrase, and sequence key events while considering how a character’s point of view shapes narrative. They have a great time and take a lot of pride in seeing their drawings and voices come to life onscreen. To start the activity, we choose a familiar book as a class before dividing up into groups of two or three students. Using the Toontastic Story Design Worksheet, students break the story into three simple events.

Dreamtime stories - The water hole + How trees were created Monday 8 april 2013 1 08 /04 /Apr /2013 14:10 - Posted in: 4ème 3 - Juniors Hi guys, today we worked with Kathryn on Australia and Aborigines again. You could watch a video about one of the Aborigines' beliefs, a story that they created to explain the creation of the world. Then Kathryn taught you a story that SHE wrote for you explaining the origin of trees. Fast Food Nation When archaeologists began to excavate the city of Pompeii, which was remarkably well preserved by the same catastrophe that destroyed it—the eruption of Mount Vesuvius in 79 CE—they were surprised by both the lack of kitchen facilities in city residences and by the large number of cookshops. These establishments have traditionally been called thermopolia, from a Greek work meaning something like “a place where hot things are sold,” and they are thought to have been simple restaurants that resembled our own fast-food restaurants. The people of Pompeii, archaeologists believe, liked to eat on the go. The word thermopolium appears only in the work of the comic playwright Plautus, and ancient Pompeiians probably didn’t use the term.