Charlie Layton - Drawings on the Fridge 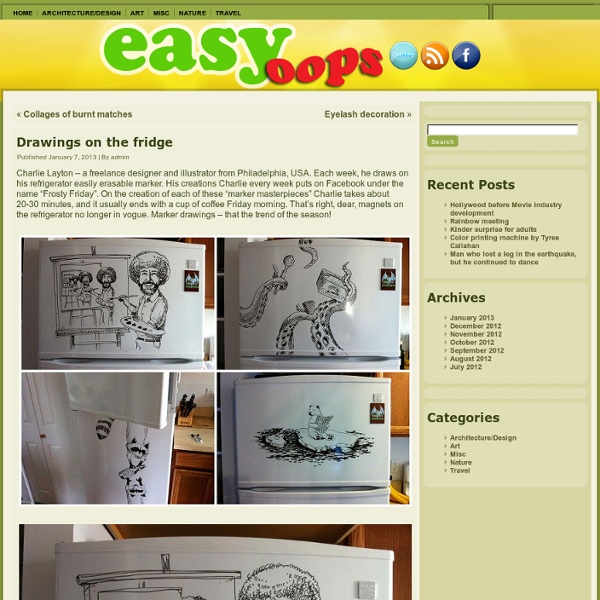 Charlie Layton – a freelance designer and illustrator from Philadelphia, USA. Each week, he draws on his refrigerator easily erasable marker. His creations Charlie every week puts on Facebook under the name “Frosty Friday”. On the creation of each of these “marker masterpieces” Charlie takes about 20-30 minutes, and it usually ends with a cup of coffee Friday morning. That’s right, dear, magnets on the refrigerator no longer in vogue. Related:  Various Artists • gifs,pics,stories,fails

Dran Based in Toulouse, Dran is a multi-talented artist who uses a variety of media such as installations, paintings and drawings to convey his ironic viewpoint. After developing his skills as part of Toulouse’s renowned graffiti scene. He is also a fan of the absurd and has published a number of books featuring his funny sketches parodying everyday events with great doses of surrealism. Check him at retroactif.free.fr/dran Enjoy The Gallery My god this is incredible. the style reminds me more of blu ( than banksy, but the sense of humor is definitely banksy-esque you stole the idea of the finger smashing a person’s head from blu. Not even close. Great stuff. nice art work Magnifique. If the style won’t be so gloomy it could be named littele masterpieces this is wonderful. stumblebutton’d art for a little soul motivation. and, youve made my day. i really like these. awesome! depressing Russian style art. This is great – would be nice to see some of the pieces on buildings.

13 Disturbing Works of Art by Female Artists After we posted 13 Disturbing Pieces of Art from History , several readers pointed out that none of the works were created by female artists. So, here are 13 more disturbing pieces of art, and they’re all created by women. 1. Artemesia Gentileschi - Judith and her Maidservant The most remarked-upon absence from the previous list was Artemesia Gentileschi’s version of Judith Slaying Holofernes (as opposed to the Caravaggio, Judith Beheading Holofernes , that we featured). Feel free to click on each and decide which you prefer! 2. One of the greatest painters of the 20th century, Mexico’s own Frida Kahlo is most notable for her self-portraits. 3. This particular painting is not so much creepy as it is bizarre. 4. Rosa Bonheur was one of the great painters of the French animalier style popular in the 19th century. 5. A far more modern piece than previous entries on the list, this painting was only created just under a decade ago, in 2003. 6. 7. 8. 9. 10. 11. 12. 13.

Rajacenna Draws Celebrity Portraits Rajacenna is an 18-year-old self-taught artist from the Netherlands who draws the most realistic portraits I have ever seen, using only pencils. I’m a big fan of realistic drawings, and I’ve previously featured amazing works like the pencil drawings of Paul Lung, the ballpoint pen portraits of Juan Francisco Casas, or Cristina Penescu’s detailed scratchboard masterpieces, but at only 18 years of age Rajacenna is in a league of her own. Born in 1993, she started modelling for various Dutch companies when she was only 4, and at 5 years old she made her first appearance on television. She starred in films, soap-operas and tv-series and at 12 she became the host of Kinderjournaal, the first Dutch web-tv for kids. She only took up drawing in 2009, and although she had never taken any art classes she produced some stunning pieces. Reddit Stumble

Rubén Belloso Adorna We’ve all had our eyes fooled by artists with photorealistic techniques such as Pedro Campos’ picture perfect oil paintings, Paul Cadden’s hyperrealistic pencil drawings, Samuel Silva’s ballpoint pen drawing, and Nathan Welsh’s city paintings, but never before had we seen it done with chalk…until now! Rubén Belloso Adorna of Seville, Spain creates enormous portraits that are so detailed, you would not believe they are not photographs, but they are actually drawings made with chalk pastels. You can see the true magnitude of each drawing when you see the photos of Adorna working on them, yet even when you zoom in and look closely they still look like a high definition photo. See Also WHITEBOARD DRAWINGS DONE ON A SHORT LUNCH BREAK The 26 year old artist holds a degree in Fine Arts from the University of Seville. Via: Reddit.com

Explosive Diahhrea Explosive Diahhrea The Ryan's Steakhouse Storyby Anonymous Funniest darn thing that has ever happened to me. A couple of weeks ago we decided to cruise out to Ryan's Steakhouse for dinner. It was a Wednesday night, which means that macaroni and beef was on the hot bar, indeed the only night of the week that it is served. We went through the line and placed our orders for the all-you-can-eat hot bar then sat down as far away from the front of the restaurant as possible in order to keep the density of kids down a bit. I had not really been feeling well all day, what with a bit of gas and such. Unfortunately, that was not to be. I went to the normal stall. For those women who may be reading this, let me take a moment to explain "The Move." I was about halfway into "The Move" when I looked down at the floor and saw a pile of vomit that had been previously expelled by one of those little bastards attending kids night. But remember, I was only halfway down on the toilet at that moment.

No One Saw This Coming Most Upvoted 440 votes Suddenly, Banana! 277 votes The Periodic Table 251 votes After seeing the new Captain America movie... 85 votes Our Benefits Aren't Gonna Pay for Themselves! 16 votes We salute you, General Share Tweet Email No One Saw This Coming Favorite View Fullscreen By littledevil9 Share: 829 Share on twitter Share on google_plusone_share Share on pinterest_share Share on stumbleupon Share on reddit Share on email Reposted by and 730 more... Cheezburger Comments jagodwin Why does that hand look like it was photoshopped in? User ID: Sophie I just spent several hours watching cute cat videos on youtube - er, I mean, doing research to find the source of this gif. youtube.com/watch? User ID: Creepster awww he's so adorib-- WTF, where did you 2 come from!? User ID: mistah bigz old. sae it on reddit weeks ago. View more items Dashie vinnysmom1221 likes this. Wilshire WHOA! Bored lol curry what a HIT! Dude

A Series of Small Things