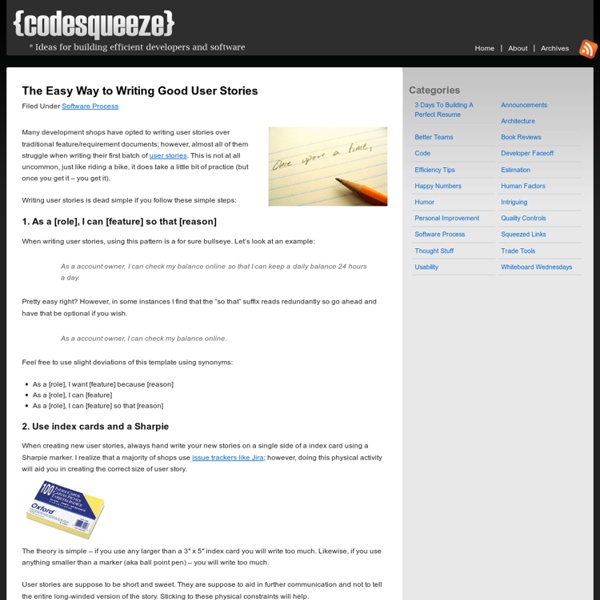 Many development shops have opted to writing user stories over traditional feature/requirement documents; however, almost all of them struggle when writing their first batch of user stories. This is not at all uncommon, just like riding a bike, it does take a little bit of practice (but once you get it – you get it). Writing user stories is dead simple if you follow these simple steps: 1. When writing user stories, using this pattern is a for sure bullseye. As a account owner, I can check my balance online so that I can keep a daily balance 24 hours a day. Pretty easy right? As a account owner, I can check my balance online. Feel free to use slight deviations of this template using synonyms: As a [role], I want [feature] because [reason]As a [role], I can [feature]As a [role], I can [feature] so that [reason] 2. When creating new user stories, always hand write your new stories on a single side of a index card using a Sharpie marker. User stories are suppose to be short and sweet. P.S. 3.

Agile Software Development: User Stories User Stories are a simple way of capturing user requirements throughout a project – an alternative to writing lengthy requirements specifications all up-front. User Stories are derived from XP ( Extreme Programming ), however they can just as easily be used for in any agile development methodology , or indeed in any home-grown development process. A User Story is a simple statement about what a user wants to do with a feature of the software, written from a user’s perspective. A User Story should not use technical jargon or state design goals. User Stories should be written in business language that is understandable to all. A User Story should focus on the who, what and why of a feature, . For example, on a job site, two high-level User Stories might be: As a job seeker, I want to search for a job, so I can advance my career. As a recruiter, I want to post a job vacancy, so I can find a new team member. As a , I want to , so I can (a) it gives clarity as to why a feauture is useful; Kelly.

User Story Estimation Techniques One of the great things about working as a consultant is the ability to try out many different ideas and adapting your personal favorite process to include things that work. This article gives the details about user story estimation techniques that I've found effective. Powers of two Originally I estimated stories as one, two, three, four or as small, medium, large, extra-large. Use four values I was once on a project that started with 1, 2, 4, 8 as their estimation values. No averages or numbers not on the scale Four values allow you to get a rough estimate without spending unnecessary time focusing on precision. Vote independently It's human nature to be influenced by other people. Take the largest estimate Even when reminded, developers seem to have a hard time estimating with a team in mind. Taking the largest estimate has additional benefits. Finally, taking the largest estimate can help save time in an estimation meeting. Large estimate gaps Insufficient information Required involvement

User stories in VS2010 MSDN Library Design Tools Development Tools and Languages Mobile and Embedded Development Online Services patterns & practices Servers and Enterprise Development Web Development This topic has not yet been rated - Rate this topic User story (Agile) Other Versions This topic has been merged with its parent, Agile process template work item types and workflow. Did you find this helpful? Tell us more... (1500 characters remaining) Thank you for your feedback Show: © 2014 Microsoft.

Agile Software Development: Example of a User Story Agile Software Development: Writing Good User Stories Over the last few weeks, I’ve written alot about writing good User Stories – you can see them all here: User Stories . User Stories are a simple way of capturing user requirements throughout a project – an alternative to writing lengthy requirements specifications all up-front. As a guide for people writing User Stories, they can follow this basic construct: As a [user role], I want to [goal], so I can [reason]. This helps to ensure that the requirement is captured at a high level, is feature oriented and covers who, what and why. As well as capturing User Stories in the above format on the Product Backlog , User Stories should be written on a card . The card comprises 3 parts: Card (i.e. the bit above, “as a user, I want…”) Conversation (notes and/or small wireframe to remind people about the feature) Confirmation (the tests that will show the feature is complete) Here’s an example User Story for you to take a look at. Ultimately, User Stories should be small. * Independent . * Negotiable .

User story History[edit] User stories originated with Extreme Programming (XP), whose first written description in 1998 only claimed that customers defined project scope "with user stories, which are like use cases". Rather than offered as a distinct practice, they were described as one of the "game pieces" used in the planning game. However, most of the further literature thrust around all the ways arguing that user stories are "unlike" use cases, in trying to answer in a more practical manner "how requirements are handled" in XP and more generally Agile projects. In 2001, Ron Jeffries proposed the well-known Three C's formula, i.e. A Card (or often a Post-it note) is a physical token giving tangible and durable form to what would otherwise only be an abstraction; The Confirmation, the more formal the better, ensures that the objectives the conversation revolved around have been reached finally. Creating user stories[edit] Format[edit] "As a <role>, I want <goal/desire> so that <benefit>" Run tests Or

Scrum User Stories Posted by admin under Scrum Basics In Scrum, work is expressed in the backlog as user stories. A team may write its user stories in a number of ways as long as they are written from the perspective of the end user. Put another way, team members are encouraged to think of their work from the perspective of who will use it (hence “user” story). Many Scrum teams have adopted the user story template developed by Mike Cohn, which identifies who the end user is, what the end user wants, and why in a single sentence. To illustrate, consider how a developer working on a calculator application for a PC might express his work. In summary, user stories document requirements with particular attention to the end user’s point of view. Watch a Product Owner and Scrum Team write user stories. Be Sociable, Share!